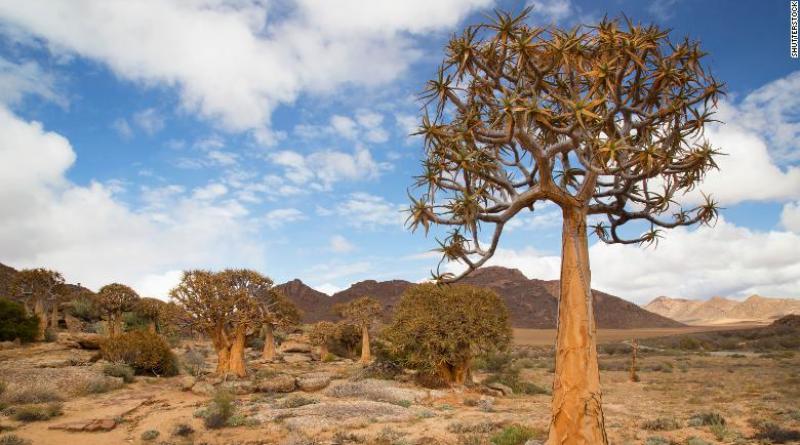 Van Zyl's golden mole is an extraordinary creature. It is more closely related to elephants than to the moles you might find in gardens and parks. It has no visible eyes or ears and it "swims" just below the surface of South African sand dunes.

This endangered species has only ever been found in two locations, both inside the Succulent Karoo desert. It's just one of the rare creatures found in this otherworldly landscape that stretches between Namibia and South Africa -- the most biodiverse arid desert on the planet, according to UNESCO.

Home to more than 6,300 plant species -- thousands of which are found nowhere else on Earth -- massive blooms of spring wildflowers, and 70 types of scorpion, the Succulent Karoo is a bountiful wilderness.

But the human demands on this place are relentless, from overgrazing by livestock to exotic plant poaching and sand mining. Only a quarter of the desert remains in a pristine state and conservationists are calling for action to research the region, and protect it.

Cobus Theron, of South Africa's Endangered Wildlife Trust (EWT), says the situation is urgent. "It's not adequately protected and the race is to try and get more land under formal protection," he says.

Theron explains that it can be hard to get the public to understand that a seemingly barren desert can be a valuable ecosystem in need of safeguarding. "While this environment looks odd and harsh, it's actually very fragile," he adds.

Unusually for a desert, the Succulent Karoo's has an abundance of plants -- including a third of the world's succulent species. Succulents -- which include cacti and aloe plants -- can survive searing temperatures by storing any moisture in their stems and leaves. Fleshy and peppered with bright flowers, they supply essential food and moisture for the wealth of insects in the Succulent Karoo, such as monkey beetles, termites and long-tongued flies. 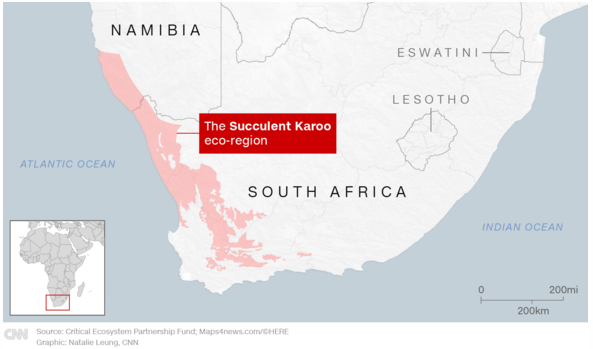 In turn, these insects draw insect-eating animals into the desert, like scorpions and golden moles. Several kinds of tortoises, birds and lizards in the Succulent Karoo are unique to this region.

In the springtime the Karoo plants burst into color -- a phenomenon that draws flocks of tourists every year. But this abundance can also attract the wrong sort of attention.

When you hear the words "illegal wildlife trade" rhinos or tigers may spring to mind, but a growing illegal market for succulents is fueling poaching activities in the Karoo region, says Marienne De Villiers, an ecologist for the South African government's conservation organization, CapeNature.

In 2015, CapeNature officials caught a couple who had illegally collected more than 2,200 plants near Knersvlakte Nature Reserve. De Villiers notes that scorpions, baboon spiders, and some lizard species also fall prey to poachers in the region.

The Succulent Karoo also suffers from heavy and historic overgrazing, says De Villiers. Overgrazing by farmed ostriches, sheep and cattle can seriously damage the desert landscape, especially during droughts, she adds. In regions where rainfall is scarce, the environment is very easily damaged, and has a longer recovery period.

Other regions of the Succulent Karoo have been mined for uranium, diamonds and sand, leaving "great scars in the landscape", De Villiers says.

For the ecologists working to protect the Karoo's endangered creatures, one of the greatest challenges is to identify exactly where they live in the vast desert.

Ian Little is a researcher at Cape Town University and a member of the EWT. He's trying to protect Van Zyl's golden moles -- but they are exceptionally difficult to track down.

"If you walk up slowly, they can feel you coming from a long distance away and bury down deep," says Little. "They move too fast for us to catch -- but they can't move fast if, say, someone comes along and plows an area. They don't distribute well, and don't travel long distances."

But drones could offer a solution. In the neighboring Nama Karoo desert, a team of scientists successfully used drones last year to track riverine rabbits. These critically endangered creatures don't breed like proverbial rabbits -- a female has only one or two kits per year. They face extinction from hunting and habitat loss.

The drone team, from Liverpool John Moores University, in the UK, collaborated with the EWT and used the expertise of ecologists and astrophysicists to help track the rabbits.

Drones with mounted infrared sensors were sent out over the desert and a machine-learning algorithm then helped to identify which species were being recorded. The team confirmed five sightings -- unheard of for this extremely rare and shy species.

Little hopes to use this technology to find golden moles in the Succulent Karoo. These animals emerge to hunt for insects at dawn and dusk, and since temperatures plummet at night in the desert, careful timing of the drone flights would let scientists detect the moles' body heat against cooler sands.

"The next step, once we know what the (golden mole) distribution is, will be to formally protect those areas," Little says.

Guardians of the desert

Only 2-3% of the Succulent Karoo is under formal protection, according to the Environmental Literacy Council, an international non-profit.

CapeNature is working to change that. It created a Biodiversity Stewardship program in 2002. Rather than buying land in order to protect it, which would be too costly, the program recruits landowners and farmers to create wildlife havens in their own back yards.

Villiers and her colleagues worked out which privately owned areas were the most important for biodiversity, and then persuaded the landowners to commit to conservation projects, ranging from environmentally sustainable farming practices, to the creation of new nature reserves within private land.

"We were coming in as strangers, really," says Villiers. "But now I'm dealing with a really wonderful bunch of landowners who are completely committed to conservation."

Over time, these projects have helped to build buffer areas and wildlife corridors throughout the Western Cape, helping to protect the Succulent Karoo and its rare species.

However, they can only be protected if people take interest in these "mind-blowingly beautiful landscapes," Villiers says. She hopes the Stewardship program will educate people about the value of the desert for years to come. "There's still so much that we don't know about the Succulent Karoo," she says, "and there's probably a wealth of species still out there waiting to be discovered."