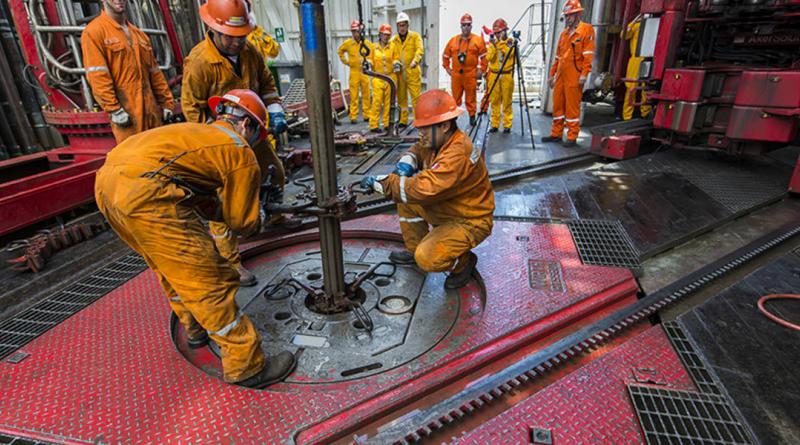 Here’s what the major fossil fuel companies are committing to do on climate change, and how that falls far short of what’s needed.

The oil and gas industry seems to have entered a state of cognitive dissonance. Like never before, energy companies are publicly acknowledging the threat posed by climate change and the need for society to reduce greenhouse gas emissions. At the same time, oil and gas production in the U.S. and globally continues to soar.

Major oil companies have announced a series of commitments to reduce their emissions, even as they continue to invest in new projects that will boost production of the very fossil fuels that are driving climate change.

This tension has given rise to statements that seem to defy logic. In October, Michael Rubio, Chevron's general manager for environmental, social and governance engagement, told The New York Times that "you can increase your fossil-fuel production, deliver superior returns for your shareholders, and still be compliant with Paris."

"Paris" is the Paris climate accord, by which countries worldwide agreed to reduce emissions to slow global warming. To meet its goals, fossil fuel burning will have to peak and fall rapidly within a couple of decades.

Instead, the world is on track to produce more than 40 percent more oil and gas by 2040 than would be consistent with the Paris goal of limiting warming to less than 2 degrees Celsius, a United Nations report published in November found. Another recent report, published by the climate and financial think tank Carbon Tracker Initiative, found that the largest investor-owned oil companies had recently invested billions in new projects that are not consistent with that goal.

If all that oil and gas is produced as planned, dangerous levels of warming become likely, if not a sure bet.

If it is not all produced—if nations do start to bend the emissions curve sharply downward—the oil and gas industry will have a problem: Its business model depends on growing demand for oil and gas. 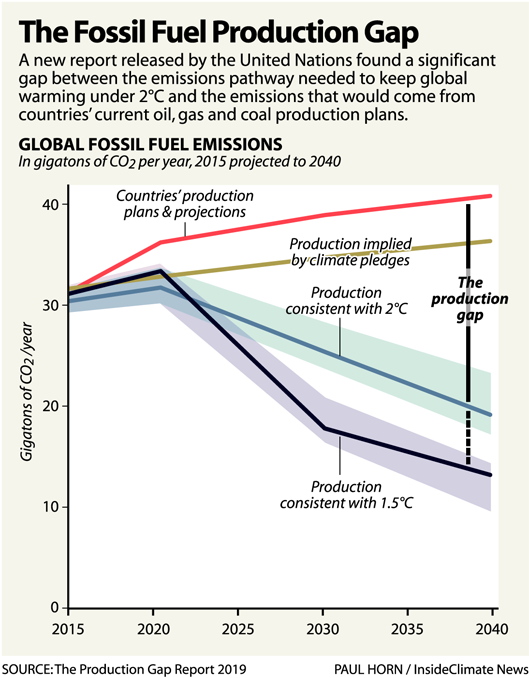 The industry's largest companies seem to understand that they can't continue with business as usual. But while these big household names like ExxonMobil and Royal Dutch Shell are seen as leaders in the global industry and are critical to any climate solution, they're actually only a small piece of it, and the others may be even further behind.

The Paris Agreement marked a shift for the oil and gas industry, which for decades had promoted climate science denial. While some companies and oil-producing nations are still lobbying against aggressive climate action at the local, national and international level, all the major investor-owned producers now at least claim to support the agreement's goals. But while they have been announcing plans to cut their corporate emissions, nearly all those plans are limited in scope, some of them extremely so.

BP and Total are the only "majors" that have actually committed to reducing their emissions. (BP said it will use offsets to make sure its emissions stay flat to 2025.) Each of the others—Exxon, Chevron, Shell and, by some counts, ConocoPhillips and Eni—generally have pledged to lower their "emissions intensity," or the amount of pollution for each unit of energy they produce.

In October, Chevron announced it would cut the emissions intensity of its oil production by 5-10 percent and of its gas production by 2-5 percent by 2023. But as Rubio's comments made clear, the company also plans to expand production, leaving open the possibility that its actual emissions will stay flat or grow, even if its operations become more efficient.

"Looking at the intensity of emissions allows us to normalize our measurement based on company size," said Sean Comey, a spokesman for Chevron. "We don't control demand, but we must be accountable for how we are efficiently and effectively providing the energy the world needs," he added.

"The industry as a whole is still tinkering around the edges," said Andrew Logan, director of the oil and gas program at Ceres, a nonprofit that works with large investors to promote sustainable business practices. 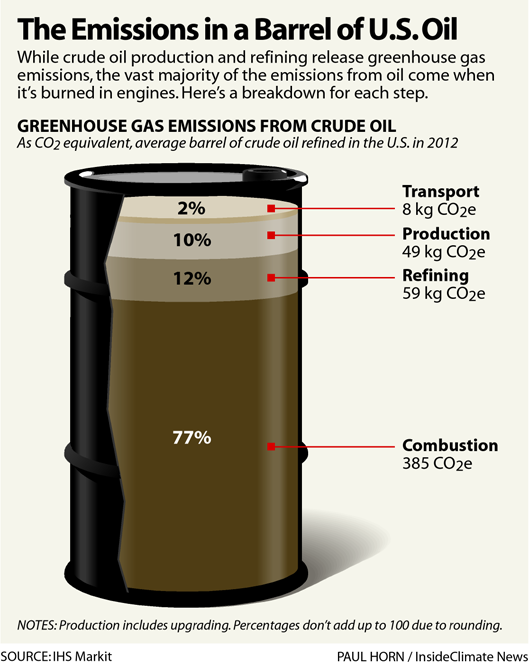 The most ambitious commitment came in December from the Spanish company Repsol, which announced that by 2050 it would reach net zero emissions, including the full life-cycle of its products. It said it would use technologies like carbon capture and sequestration and perhaps purchase offsets through reforestation programs to help achieve the goal, leaving unclear exactly how much it will wean off fossil fuels. And the bulk of the cuts will come after 2040. Repsol, however, is significantly smaller than the major international companies.

Among the big players, Shell has announced perhaps the most ambitious targets, saying itwill cut the emissions intensity of the full life-cycle of its products by 20 percent by 2035, and roughly in half by 2050. That would likely require Shell to produce lower carbon fuels or renewable electricity. The company has spent more than most of its peers on cleaner energy and electric car-charging networks, and it says this positions it well for a transition away from fossil fuels.

So far, however, Shell's actual emissions have remained essentially flat since 2015. So have those of nearly all the major oil and gas companies, according to data compiled by Reuters.

Jason Klein, vice president for energy transition strategy at Shell U.S., said in an email that the company's targets are designed to be consistent with the Paris Agreement, but that "our ambition largely depends on society making progress toward these goals overall and choices from consumers. Both energy demand and supply must evolve together."

Exxon has the highest emissions of the investor-owned oil companies, and its commitments have been more limited; there is no target that covers its entire operations. The company has committed to reducing the emissions intensity of its oil sands projects—among the most polluting sources of oil on the planet—by 10 percent. It also says it will cut methane emissions by 15 percent from 2016 to 2020, and flaring by 25 percent.

Yet flaring and venting of gas—which is primarily methane, a short-lived climate pollutant many times more potent than carbon dioxide when it comes to warming the planet—account for a small portion of Exxon's emissions, and it's unclear how much progress the company has made. It says its subsidiary XTO, which operates in U.S. shale fields, cut methane emissions including venting by 9 percent in 2017. But an analysis of industry data by The New York Times found that in 2018, the company's venting and flaring in the three largest shale fields was 70 percent higher than a year before.

Exxon did not respond to a request for comment.

Across these shale fields, which host some of the fastest growing oil production in the world, the New York Times analysis found that venting and flaring have surged more broadly. In Texas's Permian Basin, these wasteful practices used more gas than the entire states of either Arizona or South Carolina, the analysis found.

Oil Majors Are Only Part of the Problem

Mark Brownstein, senior vice president for energy at the Environmental Defense Fund, an advocacy group, said changes by these major companies are critical to progress on climate change, but they're only part of the challenge.

A large number of smaller companies account for the bulk of U.S. oil and gas production, he said, and are often the worst offenders when it comes to wasting gas by burning or venting it into the atmosphere.

"It is among those companies where it is much less clear that there is a consensus around the need to act on climate change," he said.

Outside the U.S., nationally owned oil companies control more than 70 percent of global oil reserves. Brownstein said there's a huge range within these other companies' efforts to transition to cleaner products, but that none are acting with the urgency needed. 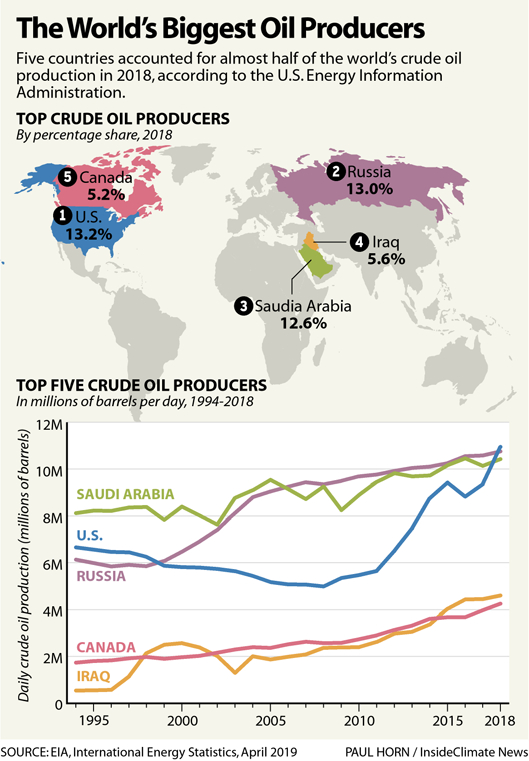 Among the leading investor-owned companies, all the business plans continue to rely on maintaining or even expanding the sale of their core products, said Mike Coffin an analyst with Carbon Tracker. And each of the majors has continued to invest in the type of large, long-lived and expensive projects that present the highest risks for the climate and for investors, his organization has found, making their support for the Paris Agreement ring hollow.

"It's just fundamentally clear that oil and gas production needs to fall," Coffin said. His analysis found that the majors collectively need to cut their production by 35 percent by 2040 in order to keep their operations in line with the goals of the global compact.

Before joining Carbon Tracker, Coffin spent 10 years as a geologist with BP, where his job was finding more oil and gas. He left partly because he wanted to do something more meaningful, he said, but also because he thought his job had become obsolete.

"We've already found enough of it," he said.

Big Oil Shareholders Look To Cash In On Renewable Boom.