5 Big Lies About Climate Change, And How Researchers Trained A Machine To Spot Them 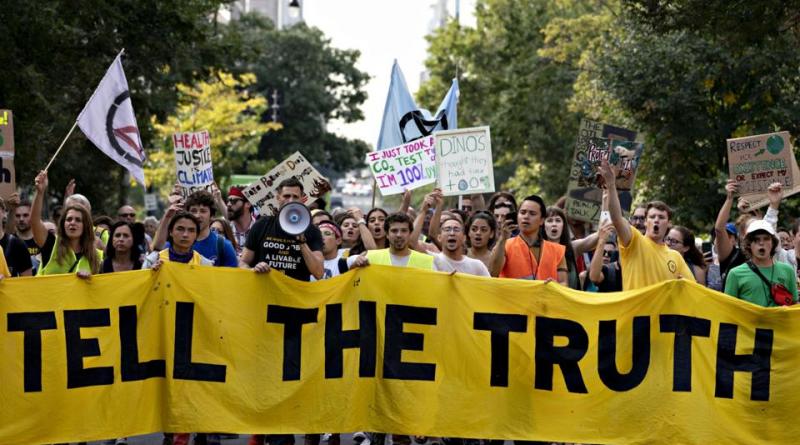 When it comes to climate change, the science is settled. So why does climate misinformation continue to spread online and in our media? And how are the climate deniers’ tactics changing? A pioneering new project has revealed new clues about such false claims and where they come from.

In the study, published by the journal Nature Scientific Reports, researchers identified a wide array of dubious climate claims, then programmed a computer to recognize them. The analysis has exposed the changing face of climate change denial, and details the ways in which powerful interest groups are attempting to delay climate action. Among the findings are new data to show how those spreading climate misinformation have switched over time from science denial—that is, claiming that climate science isn’t reliable—to solutions denial—the claim that solutions to slow or otherwise respond to climate change won’t work.

“One of the most valuable insights from our research was identifying the most prevalent categories of climate misinformation—attacks on the integrity of climate science, and misinformation targeting climate solutions,” said John Cook, a study author and postdoctoral research fellow with the Climate Change Communication Research Hub at Monash University. “This shows the value of using a model to provide an objective, quantitative analysis. My gut instinct was that science myths were much more prevalent than they actually are, when our analysis found they were a relatively small proportion of climate misinformation.”

Looking at climate-related content from 33 prominent climate contrarian blogs and 20 conservative think-tanks produced between 1998 and 2020, the team began by sorting the climate claims into brackets. They ultimately came up with five major themes of climate misinformation, namely: 1) Global warming is not happening; 2) Human-produced greenhouse gases are not causing global warming; 3) Climate impacts are not bad; 4) Climate solutions won’t work; and 5) Climate science or scientists are unreliable.

These five main themes were made up of 27 sub-claims and 49 sub-sub-claims, ranging from the humdrum “scientists are biased” trope to the otherwise true but completely irrelevant “CO2 is a trace gas” rhetorical ploy.

The analysis revealed that most climate misinformation does not take the form of climate myths—such as the falsehood that recent global heating is the result of a natural cycle—but rather focuses on undermining climate research and proposals to moderate and prepare for climate change.

The switch from outright “climate denial” to “solutions denial” likely came about because the scientific evidence for human-caused climate change is now so overwhelming. “Science denial has become untenable,” Cook told me. “So inevitably, opponents of climate action are strategically shifting to misinformation targeting climate solutions in order to delay climate policy.”

This aspect is important, he explained, “because most climate fact-checking focuses on science myths and have been largely neglecting the most prevalent forms of climate misinformation.”

Indeed, while the conclusion of the COP26 climate summit last week left much to be desired, researchers noted that the conference did illustrate that the entire international community now accepted the physical science basis for climate change. “I'm proud because never before has science featured so strongly in the COP decisions,” said Joeri Rogelj, director of research and lecturer in climate change and the environment at the Grantham Institute, Imperial College London. “They frame and inform the urgency and requirements of the challenge ahead.”

Yet groups including the Union of Concerned Scientists say that wealthy special interest groups, including fossil fuel companies, continue to disseminate misinformation with the express purpose of delaying climate action.

“Ultimately the purpose of all climate misinformation is to delay climate action—whether the argument is ‘global warming isn’t happening’ or ‘climate models are unreliable,’” Cook said. “The conclusion is always ‘therefore we shouldn’t act on climate change.’”

The report also offers insights as to where the money behind climate misinformation is coming from. All the major donors revealed by the research were American, and included the influential Donors Capital Fund, the ExxonMobil Foundation and Koch Affiliated Foundations. Also included was the Vanguard Charitable Endowment Program, operated by investment firm Vanguard, which was revealed this year to be the largest investor in the global coal industry, to the tune of $86 billion.

So with climate misinformation now categorized and broadly understood, what can be done about it?

Researchers at the University of Cambridge wrote last month that while some climate myths had gained traction among 1,722 survey respondents, members of the public were generally rather adept at spotting bogus headlines. Among their recommendations, postdoctoral research associate Mikey Biddlestone and Sander van der Linden, a professor of social psychology in society at Cambridge, suggested social media and traditional media could do more to broadcast the views of experts, who are generally trusted by the public. Also effective, they said, is the tactic of “prebunking,” whereby media use stories that “pre-emptively refute short extracts of misinformation” which can help audiences to “develop mental antibodies that allow them to detect misinformation on their own in the future.”

“In order to counteract climate misinformation, we need to combine the findings from our machine learning research with other critical thinking research identifying the misleading rhetorical techniques and logical fallacies in each of the misinformation claims,” Cook said. “Combining these two separate lines of research into a single coherent work will bring us much closer to the holy grail of fact-checking.”

The full report, in Nature Scientific Reports, can be read here.

'We see through their lies': Greta Thunberg takes aim at political leaders – video

'Nothing About Us Without Us' - 350.org and allies bring to COP26 the voices from people on the frontlines