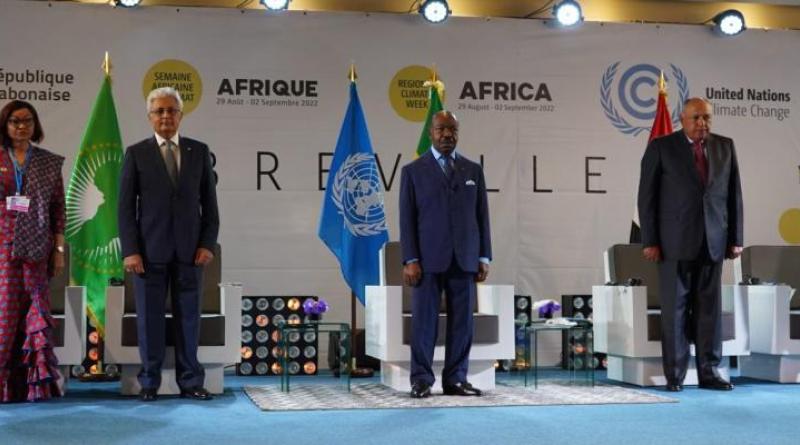 At the opening ceremony, President of Gabon, Ali Bongo Ondimba, was joined by Ministers and other delegates from 42 countries from across Africa and officials from key UN and multilateral agencies. ACW 2022 will run through 2 September and marks an important step towards COP27.

ACW 2022 convenes more than 1,000 key stakeholders from all parts of Africa to collaborate, discuss risk and work together towards opportunity. Public and private sector leaders and civil society working together at the regional level on climate action can drive progress towards global climate goals.

Gabon’s President, Ali Bongo Ondimba, said: “In less than three months, the UN Climate Change conference will take place in Sharm el- Sheikh, Egypt. COP27 is described as Africa's COP and will significantly shape our future. As one of the last major climate events before COP27, Africa Climate Week can bring us together to walk down the road to COP27 with unity of purpose and resolve for a better future. I urge you to take this opportunity to work on innovative, concrete and sustainable solutions and give African nations the means to fight climate change successfully.”

In addition to hosting ACW 2022, Gabon is leading by example. Gabon has published its second Nationally Determined Contribution, in which the country commits to remain carbon neutral up to and beyond 2050. Forests cover nearly 90% of the country’s surface, making it the second-most forested country on the planet. Last year, Gabon became the first African country to receive payment for reducing emissions by protecting its forests. And Gabon has passed legislation that will pave the way for the country to begin trade in carbon credits.

Egypt’s Foreign Minister and COP27 President-Designate, Sameh Shoukry, said: “As we prepare for COP27, this week is opportune to articulate Africa’s priorities for reducing emissions, building transformative adaptation, accessing appropriate finance and addressing loss and damage. The disproportionate responsibility placed on Africa, which contributes less than 4 percent of the world’s energy-related emissions but faces serious consequences to the lives and livelihood of its people, cannot be described as anything but climate injustice. We need bold and collective actions built on the principle of equity. Egypt’s COP27 Presidency is committed to ensuring that no one is left behind.”

In a video address Amina J. Mohammed, Deputy Secretary-General of the United Nations, said: “This is a much-need climate conference on African soil. We are still far from meeting the 1.5 goal or achieving full protection for our populations. We need to provide means of implementation for all the objectives of the Paris Agreement. With less than 70 days until COP, we need to see that commitments made are commitments kept, including at COP26 in Glasgow (…) Africa has contributed least to the climate emergency. And yet it is facing devastating impacts, with biodiversity loss, water shortages, reduced food production, loss of lives and livelihoods. All of this is undoing years of progress and undermining the sustainable development goals. COP27 must show that multilateralism can deliver for Africa and for the world.”

UN Climate Change Deputy Executive Secretary, Ovais Sarmad, said: “COP27 must be the implementation COP – where nations show how they will put the Paris Agreement to work in their countries through legislation, policies and programs. COP27 is also about supporting all segments of society under the banner of inclusive multilateralism, to drive significantly more climate action. This is all difficult, but we are making progress. In this time of mounting challenge, of crisis upon crisis, cooperation and consensus are fundamental to address the existential threat of climate change. And we must maintain our focus on that threat.”

ACW 2022 is hosted by the Government of Gabon and organized by UN Climate Change in collaboration with global partners UN Development Programme, UN Environment Programme and the World Bank Group. Partners in the region include the Africa Union, the Africa Development Bank (AfDB), the UN Economic Commission for Africa (UNECA) and UN Gabon.

The COP27 Climate Champion, Dr. Mahmoud Mohieldin, said: "Africa Climate Week is an important moment for climate action in Africa to showcase the continent's contributions to the global movement to address climate change and to highlight its special needs. The Just transition towards the green economy is a priority for Africa through balancing its need to combat climate change with an urgency to develop the continent’s economies. The adaptation agenda needs a boost at COP27 to promote its global visibility and in particular in Africa, we should be reminded that every dollar spent on adaptation generates two to ten dollars of economic benefits."

In advance of the ACW 2022 opening, UNDP Administrator, Achim Steiner, said: “We are witnessing the effects of climate change hitting faster than expected, as record-breaking heatwaves ripple across the globe, including the Continent of Africa. Climate-change-induced drought, combined with the cost-of-living crisis, is leaving millions of people in regions such as the Horn of Africa facing hunger and famine. With our window to take decisive action closing, we need to quickly roll-out innovative solutions and forge strengthened partnerships to slow the steady march of climate change: a key objective of the upcoming Africa Climate Week.”

Abdoulaye Seck, Country Director for Gabon, Cameroon, Central African Republic, Republic of Congo and Equatorial Guinea, The World Bank, said: “This Africa Climate week is a critical milestone to mobilize all actors on the continent around the climate agenda ahead of the Africa COP in Sharm el-Sheikh. It is time for African countries to accelerate actions and agree on key priorities to avert the climate crisis. This will require ramping up of climate finance, and at-scale investments to protect and enhance natural capital and build resilience of vulnerable people and communities against the impacts of climate change in Africa through a collective effort.

Inger Andersen, Executive Director of UNEP, said: “Africa is at the forefront of the climate crisis, but it is also a place of immense potential for action. The COP in Egypt represents a unique opportunity to accelerate implementation of effective climate solutions. With renewables and increased efficiency, we can reduce emissions and tackle energy poverty and air pollution. With nature-based solutions, we can restore ecosystems, build resilience against zoonotic diseases, floods and heatwaves. By reducing food loss and waste, we can mitigate emissions and food insecurity, and reduce pressure on land and water resources.”

ACW 2022  is part of the Regional Climate Weeks 2022 series. MENACW 2022 kicked off the series in March in Dubai and engaged almost 4,000 people over four days. LACCW 2022in July convened more than 1,700 participants in Santo Domingo in the Dominican Republic.

The RCWs were strongly endorsed in last year’s Glasgow Climate Pact adopted at the UN Climate Change Conference COP26 last November, which recognized the Climate Weeks as a platform for credible and durable climate action.

Visit www.regionalclimateweeks.org to explore the Regional Climate Weeks 2022 and see how they are making a difference on climate change in key regions.

For media inquiries, contact UN Climate Change at press@unfccc.int. For press inquiries on the ground in Gabon and in French, please contact SFayoumi@unfccc.int

Join the conversation on social media using the hashtag #AfricaClimateWeek

With 198 Parties, the United Nations Framework Convention on Climate Change (UNFCCC) has near universal membership and is the parent treaty of the 2015 Paris Climate Change Agreement. The main aim of the Paris Agreement is to keep a global average temperature rise this century well below 2 degrees Celsius and to drive efforts to limit the temperature increase even further to 1.5 degrees Celsius above pre-industrial levels. The UNFCCC is also the parent treaty of the 1997 Kyoto Protocol. The ultimate objective of all agreements under the UNFCCC is to stabilize greenhouse gas concentrations in the atmosphere at a level that will prevent dangerous human interference with the climate system, in a time frame which allows ecosystems to adapt naturally and enables sustainable development.