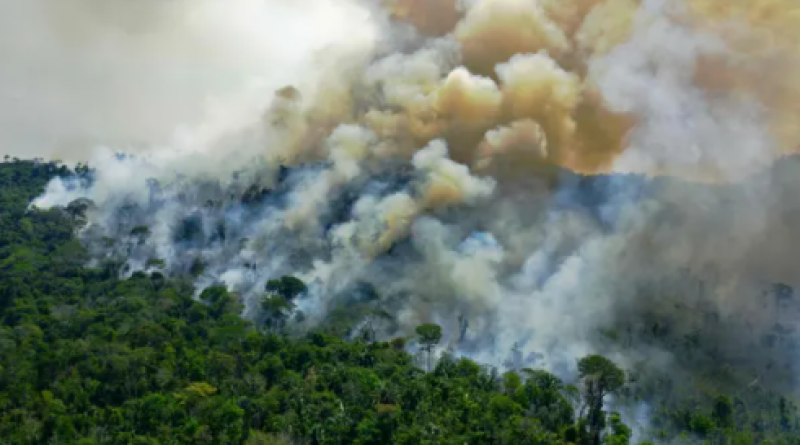 Cutting emissions more urgent than ever, say scientists, with forest producing more than a billion tonnes of carbon dioxide a year.

The Amazon rainforest is now emitting more carbon dioxide than it is able to absorb, scientists have confirmed for the first time.

The emissions amount to a billion tonnes of carbon dioxide a year, according to a study. The giant forest had previously been a carbon sink, absorbing the emissions driving the climate crisis, but is now causing its acceleration, researchers said.

Most of the emissions are caused by fires, many deliberately set to clear land for beef and soy production. But even without fires, hotter temperatures and droughts mean the south-eastern Amazon has become a source of CO2, rather than a sink.

Growing trees and plants have taken up about a quarter of all fossil fuel emissions since 1960, with the Amazon playing a major role as the largest tropical forest. Losing the Amazon’s power to capture CO2 is a stark warning that slashing emissions from fossil fuels is more urgent than ever, scientists said.

The research used small planes to measure CO2 levels up to 4,500m above the forest over the last decade, showing how the whole Amazon is changing. Previous studies indicating the Amazon was becoming a source of CO2 were based on satellite data, which can be hampered by cloud cover, or ground measurements of trees, which can cover only a tiny part of the vast region.

The scientists said the discovery that part of the Amazon was emitting carbon even without fires was particularly worrying. They said it was most likely the result of each year’s deforestation and fires making adjacent forests more susceptible the next year. The trees produce much of the region’s rain, so fewer trees means more severe droughts and heatwaves and more tree deaths and fires.

The government of Brazil’s president, Jair Bolsonaro, has been harshly criticised for encouraging more deforestation, which has surged to a 12-year high, while fires hit their highest level in June since 2007.

Fewer trees meant less rain and higher temperatures, making the dry season even worse for the remaining forest, she said: “We have a very negative loop that makes the forest more susceptible to uncontrolled fires.”

Much of the timber, beef and soy from the Amazon is exported from Brazil. “We need a global agreement to save the Amazon,” Gatti said. Some European nations have said they will block an EU trade deal with Brazil and other countries unless Bolsonaro agrees to do more to tackle Amazonian destruction.

The research, published in the journal Nature, involved taking 600 vertical profiles of CO2 and carbon monoxide, which is produced by the fires, at four sites in the Brazilian Amazon from 2010 to 2018. It found fires produced about 1.5bn tonnes of CO2 a year, with forest growth removing 0.5bn tonnes. The 1bn tonnes left in the atmosphere is equivalent to the annual emissions of Japan, the world’s fifth-biggest polluter.

“This is a truly impressive study,” said Prof Simon Lewis, from University College London. “Flying every two weeks and keeping consistent laboratory measurements for nine years is an amazing feat.”

“The positive feedback, where deforestation and climate change drive a release of carbon from the remaining forest that reinforces additional warming and more carbon loss is what scientists have feared would happen,” he said. “Now we have good evidence this is happening. The south-east Amazon sink-to-source story is yet another stark warning that climate impacts are accelerating.”

Prof Scott Denning, at Colorado State University, said the aerial research campaign was heroic. “In the south-east, the forest is no longer growing faster than it’s dying. This is bad – having the most productive carbon absorber on the planet switch from a sink to a source means we have to eliminate fossil fuels faster than we thought.”

A satellite study published in April found the Brazilian Amazon released nearly 20% more carbon dioxide into the atmosphere over the past decade than it absorbed. Research that tracked 300,000 trees over 30 years, published in 2020, showed tropical forests were taking up less CO2 than before. Denning said: “They’re complementary studies with radically different methods that come to very similar conclusions.”

“Imagine if we could prohibit fires in the Amazon – it could be a carbon sink,” said Gatti. “But we are doing the opposite – we are accelerating climate change.”

“The worst part is we don’t use science to make decisions,” she said. “People think that converting more land to agriculture will mean more productivity, but in fact we lose productivity because of the negative impact on rain.”

Research published on Friday estimated that Brazil’s soy industry loses $3.5bn a year due to the immediate spike in extreme heat that follows forest destruction.

Brazilian Amazon released more carbon than it absorbed over past 10 years.