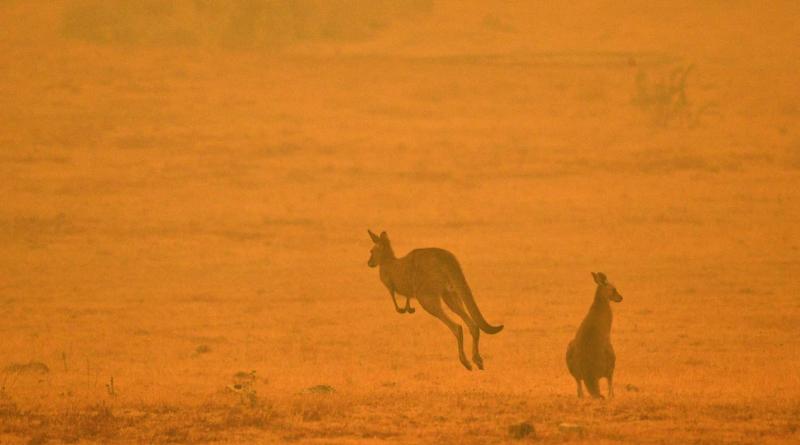 Two wildfires have merged to form a massive inferno in south-eastern Australia, as experts warned some species are likely already to be extinct.

It is just one of 135 bush fires that have killed at least 28 people and an estimated one billion animals, and damaged or destroyed nearly 3,000 homes since September.

Firefighters tackled the inferno as a leaked report on the emergency to the government of Victoria this week warned that some species are likely to already be extinct.

And a British scientist predicted the tally of animals killed could be in the trillions – far larger even than the half or one billion estimated.

Prof Ben Garrod, an evolutionary biologist at the University of East Anglia, said: “With habitat loss, reduced food availability and possible increased predation, the full effects of these fires will not be felt for months or years to come, but will certainly cause the extinction for some of Australia’s most iconic, fragile and beautiful inhabitants.”

He said there is debate about whether half a billion or a billion animals have been affected, but “by the time we include invertebrates as well as mammals, reptiles, amphibians and birds, the total will conceivably be in the trillions”.

Australia was home to about 80 per cent of mammals found nowhere else on Earth, and the full effect of the fires may not be felt for months or years to come, he said.

The Australian Academy of Science said the government should put in place long-term plans for a more dangerous future.

“As a nation, we must deal with extreme weather events more effectively than we currently do. As such events become more frequent and severe, we must adapt Australia and Australians accordingly, as well as strengthen mitigation efforts,” the academy’s president John Shine said in a statement.

“The academy is resolute that the response to the bushfires must extend beyond the immediate and essential need to rebuild and recover,” he said.

“All the while, Australia must take stronger action as its part of the worldwide commitment to limit global warming to 1.5C above the long-term average to reduce the worst impacts of climate change.”

But Mr Morrison has continued to dismiss criticism of the government’s climate policies, saying it was taking a “balanced” approach.

“We continue to consider our policies carefully here and we understand that we don’t want job-destroying, economy-destroying, economy-wrecking targets and goals, which won’t change the fact that there have been bush fires or anything like that in Australia,” he told Sydney radio station 2GB.

A leaked report on the emergency delivered to the government of Victoria this week warned that some species are likely to already be extinct.

About a quarter of the sooty owl population has been killed, and “almost all” eastern ground parrots’ Victorian habitat destroyed, the document states, according to The Sydney Morning Herald.

More than 40 per cent of the Victorian habitats of the sooty owl, diamond python, and brush-tailed rock-wallaby have also been wiped out, the Department of Environment, Land, Water and Planning concluded.

Lastreopsis decomposita, known as the “trim shield” fern, may now be extinct in the state, it said.

Koalas and flying foxes are also said to have died en masse, but Australian authorities are hoping less intense conditions this week will help limit the destruction.

Mike Lee, of Flinders University in Adelaide, said Australia was one of only 17 “megadiverse” countries, and numbers of small, less mobile invertebrates, which make up most animal biodiversity, would be worst hit.

Meanwhile, scientists fear that when rain does fall, it may taint drinking supplies in cities and kill even more wildlife by washing charred debris into rivers.

More than 26 million acres, an area bigger than the island of Ireland, have now burned, leaving ash, soot, and blackened gum tree leaves, which will contaminate water supplies.

Ricky Spencer, a conservationist at the University of Western Sydney in New South Wales told National Geographic: “Given the severity of the fires, pretty much everything [in burned landscapes] is gone, so one of the big issues is that when we do get some rain, a lot of that ash and crap, nothing is going to stop it running in our catchments.”

Rivers that are home to treasured wildlife, such as the platypus, will also be affected, and algal blooms in dams exacerbated by the fires could dirty water supplies of cities such as Sydney and Melbourne. Stuart Khan, an engineer at the University of New South Wales said treatment processes might be slowed down significantly.

It comes as officials confirm a firefighter died while on duty in Victoria on Saturday, raising the death toll from the bushfires that have devastated parts of the country to 28.

In a statement Forest Fire Management Victoria Chief Fire Officer Chris Hardman said: "It is with great sadness that we confirm that a ... firefighter from Parks Victoria has been involved in an incident while working on a fire in the Omeo area resulting in a fatality,"

Blade recycling: a top priority for the wind industry.