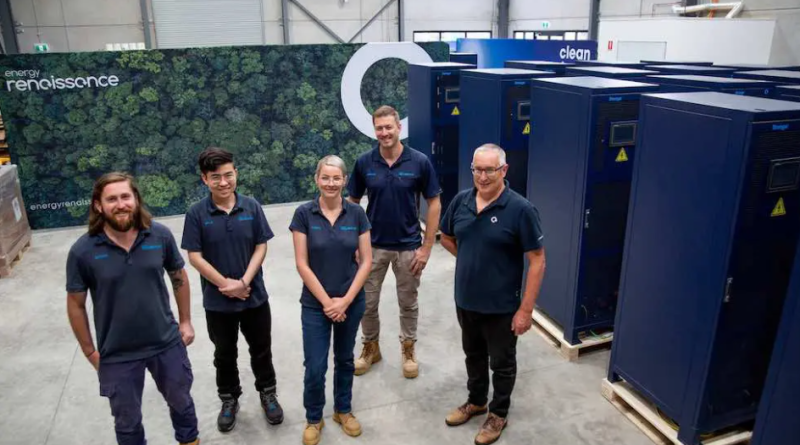 Australia’s first giga-scale battery manufacturing facility – being built in the heart of New South Wales’ coal country – is nearing completion and has signed up three new Australian suppliers to ensure near 100 per cent Australian made components.

The solar powered Renaissance One plant in the Hunter Region industrial suburb of Tomago – near the huge aluminium smelter – is being built by Energy Renaissance.

It will be the Southern Hemisphere’s first facility producing semi-solid state lithium-ion batteries, which Energy Renaissance describes as “super tough” hot climate batteries that will suit commercial energy storage and use in heavy transport.

At this stage, the growing team is working out of a temporary production facility while the finishing touches are made to the giga-factory which is expected to start commercial production by October this year.

And while this means they are currently still importing battery cells for its SuperStorage batteries, Energy Renaissance has been building up a chain of local suppliers to provide almost all of the other parts.

This includes Academy Sheetmetal, a family owned business from Newcastle, to supply the steel cabinetry for the battery racks; Penrith-based GPC Electronics, to supply the printed circuit boards for the Battery Management Systems; and B&C Plastics, based in Brisbane, for the plastic components used in the packs.

The new partnerships mean that 32 of the 35 components that make up a superStorage battery are produced in Australia, which has been at the core of Energy Renaissance’s grand vision to build new skills and jobs as well as locally made batteries.

For Craighead, the new supply partnerships are quite simply “a promise kept.”

“This is one of the things we said we do – we said we’d be all Australian, we’d use Australian suppliers,” says founder and development director Brian Craighead.

“So we’re at 92% Australian components now, which is which is very cool. It’s what we said we’d do.”

Managing director Mark Chilcote says the use of local suppliers will protect against supply constraints and unexpected price increases and increased freight costs.

“Energy Renaissance is strengthening local manufacturing and, in the future, securing our supply chain for critical battery minerals when we commence the manufacturing of battery cells in Australia,” he says.

Craighead says that while the going has been tough – and capital hungry – over the past seven years, some parts of setting up the business have been much easier than anticipated.

This includes recruitment, with a deep pool of local talent to draw from that includes engineers and electricians trained in the local coal industry and at the nearby Tomago aluminium smelter.

Another major positive has been the support Energy Renaissance has had from the local community.

“I’m humbled by how much genuine support there is for us to operate,” Craighead told RenewEconomy.

“The industry, the market really, supports [the factory]. And I thought – I’d always been told (that) people don’t really care about buying Australian anymore.

“In our industry, at least now maybe that’s because they can’t get supply, maybe there’s other reasons. But we get a lot of support. So that’s a positive.”

Of course, there have been some negatives, too.

“One thing we’ve been spectacularly unsuccessful at is actually getting support from government,” Craighead said.

“In some ways, that’s fine; we’ve done it ourselves. …But we could be much further ahead. And so it’s a shame. … We could have been a four-year overnight success.

“I suspect, to be honest, pre-Covid I think most people thought we would never pull this off,” he added.

“Covid changed everything for us, because suddenly the idea of last minute supply from overseas, outsourcing, that doesn’t sounds like a very good idea any more.

“And so make ‘em where you sell, we don’t have any problem convincing people of that now. So Covid has in a lot of ways changed the perspective of what we’re doing.

“But still it would have been nice to have more support.”