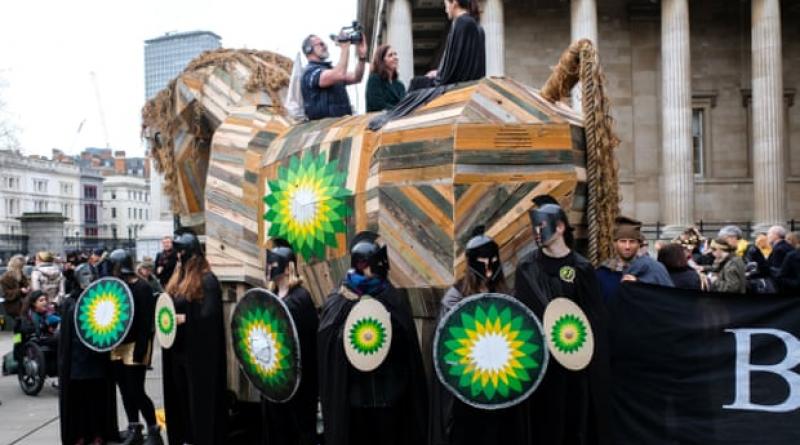 Staff working at the British Museum in London have joined calls for its management to ditch its sponsorship deal with the oil company BP after a weekend of protests.

Members of the PCS union’s culture group, which represents 4,000 workers across the UK’s leading cultural sites, said the museum had a duty to recognise the escalating climate crisis and cut its ties with BP – one of the world’s biggest producers of fossil fuels.

“As a public institution, the British Museum owes it to its staff, its visitors and its future to play a responsible role in the greatest challenge facing society,” the PCS union said in a statement on Monday. “It is not true that we cannot afford to refuse BP’s oil money. In fact, we cannot afford to accept it.”

The move by staff follows a weekend of protest at the museum, which began on Friday night when protesters dressed as ancient Greek warriors smuggled a four-metre Trojan horse on to the museum’s forecourt. The protest was in response to the exhibition Troy: Myth and Reality, which is described as “supported by BP”.

On Saturday, 1,500 supporters took part in a day of protests, occupying 11 of the museum’s rooms, with speeches, singalongs, and talks by campaigners from West Papua and Senegal.

Origami swans were scattered throughout the museum adorned with messages including: “Choose sponsors who care about our future.” Protesters finished the day by tearing apart paper versions of BP’s logo near the museum’s main entrance.

The protest is the latest escalation in the campaign to end fossil fuel sponsorship at the UK’s leading cultural venues. In October, the Royal Shakespeare Company ditched its sponsorship deal with BP, after a campaign from artists, environmentalists and members of the public.

Monday’s backing from museum staff will increase the pressure on management to take action. The statement was co-signed by former museum trustee Ahdaf Soueif, who resigned last summer over the BP sponsorship, the treatment of workers and the issue of repatriation of artefacts.

Soueif said: “Cultural institutions have a moral responsibility in who they choose as partners. It’s time for the British Museum to respond to the legitimate and pressing concerns of young people across the planet. It’s time to drop BP.”

*Title photo : A weekend of protest at the museum included the smuggling of a Trojan horse on to its grounds.

We are to conclude our partnership with BP.