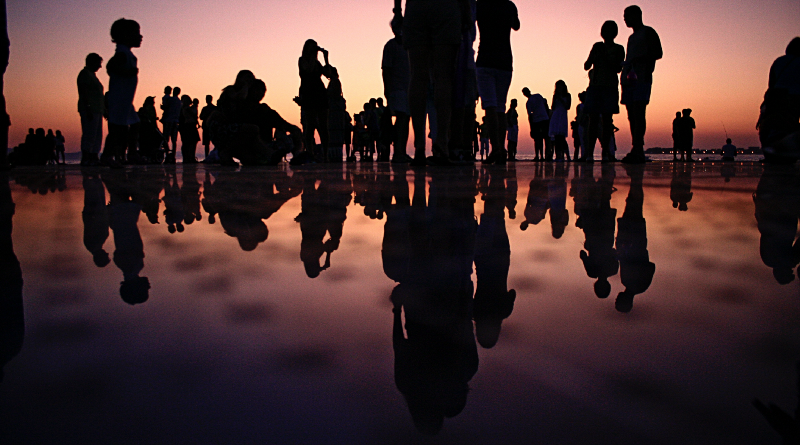 A month ago, the Intergovernmental Panel on Climate Change (IPPC) told the world that we have just 12-years to avoid a catastrophic climate breakdown.

Believe it or not, this is actually a conservative assessment. At least this is the view of a growing chorus of scientists and academics that believe climate change is reaching an end game and that our very survival is uppermost.

To get a handle on the panic, take a moment to reflect over your next soya milk latte. It’s likely to be as well — if not better — travelled than you. The coffee beans, soya milk, and chocolate dust topping arrive in your mug through a complex weave of just-in-time cross-border supply chains. Think of your coffee as the refined outcome of a never-ending game of Tetris (the tile-matching puzzle video game) where the ingredients gently fall and snap together in orderly sequence.

This is a microcosm of today’s global economy — the most incredible and fragile feat of human civilisation. Because climate change has no truck with orderly sequence. Changes to weather — as a result of rising temperature — threaten to play havoc with global agriculture and crop yields. No more Tetris.

At the benign end of the spectrum, there might not be any more soya milk lattes. Of course, you may consider this a small price to pay in a climate impacted UK. We’ll cover the country in greenhouses and learn to repair our clothes. Just like our grandparents. And every generation before them.

But to paraphrase John Donne, no country is an island when it comes to climate change. A global economy in perpetual stress threatens a great deal more than the soya milk latte. Searing temperatures across Europe prompted the European Association of Fruit and Vegetable Processors to say it was the most serious situation in the last 40 years. Irish suppliers have warned consumers that the price of potatoes could double in price over the next year.

What if this became the pattern of future European harvests as global temperature continued to rise? Could this herald the so-called ‘global emergency’? But far from heralding the end of the world, we’re told this could yet be an epoch-making opportunity to fashion an alternative to consumer capitalism through building a utopia of trees, smart homes, and electric cars.

‘We can do it’ proponents point to triumphant struggles such as the abolition of slavery, universal suffrage and civil rights. But all these victories were predicated on getting access to something hitherto denied. Resolving the ‘global emergency’ through a miraculous reduction in greenhouse gas emissions requires the very opposite: billions of people relinquishing something they already have. That being materialism and the widespread aspiration to accumulate more.

Which is why grandiose global climate agreements — such as that agreed in Paris — are just that. There isn’t going to be a single, galvanising global event to create the permission space required for signatory politicians to deliver. We’d need nothing less than a prolonged and violent blast of 22nd Century global weather to simulate what the future has in store.

Climate change is simply the wrong kind of emergency. Which is why some eschew this dissonance entirely in favour of a ‘eureka fix’ — or geo-engineering — to fend off climate change and maintain the status quo. Thus far this is characterised by the unfulfilled ambitions of both solar radiation management and carbon dioxide removal from the atmosphere.

And so to the crux of the matter: whether you believe we can grow our own, snatch utopia from collapse or find a tech fix to carry on as normal, you are merely choosing the colour of your comfort blanket.

Our children and grandchildren won’t thank us. They’ve no doubt already absorbed the ecological undertones of blockbuster movies including Avengers: Infinity War, Kingsman: The Secret Service, Resident Evil: The Final Chapter, Elysiumand the Channel 4 drama Utopia. All start with the premise that collapse is real and that the most extreme and morally bankrupt acts are required to either subvert or navigate it.

So pull off the comfort blanket and what are we left with? Time. At least some. To prepare for breakdown. What if we could truly crack key technologies such as desalination so that today’s rain-fed crops can still be cultivated post-breakdown? And what of the role of grief counselling and religion to help address the unprecedented emotional and spiritual transition ahead of us? Just a couple of ideas around Deep Adaptation that the biggest brains on the planet need to be working on. Right now.

And the world’s richest people will pay. For all of it. Let it not be forgotten that the richest hundred people together own more than the poorest 4 billion. They should know the global financial system will be one of the first casualties of breakdown. There will be no more returns on investment. Digital bank balances will cease to be a medium for stored value. So they must spend it all now in preparation.

What better way for philanthropists and billionaires to conquer their own denial and regain a sense of purpose? Foundations will spend their entire endowment with unparalleled gusto. And billionaires will recognise that footing the bill for ‘global breakdown cover’ is the only insurance they have against private soldiers guarding their luxury bunkers from rebelling and commandeering all the food. It’s starting to catch on.

Bottom line: we’re not going to prevent some form of breakdown from happening. Above all — and to borrow from former UK Chancellor George Osborne — we really are all in this together. So let’s make ‘global breakdown cover’ the eighth wonder of the world; the high-watermark of humanity’s ability to innovate and adapt. Or did I just wrap myself in a comfort blanket?