California will name and categorise heatwaves – should Australia follow suit? 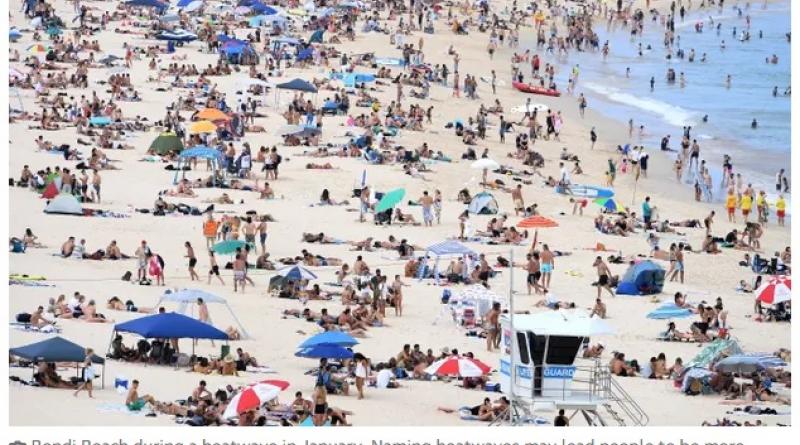 Heatwaves kill more people in Australia than all other natural disasters combined, and some experts believe naming them might help reduce deaths

California has become the latest jurisdictions to set up a system that would categorise and name heatwaves like cyclones or hurricanes, raising questions about whether Australia should adopt a similar system to reduce heat-related deaths.

Following the recent example of Greece and the city of Seville in Spain, authorities in California will introduce a bill in January to develop the ranking system.

The proposed system works by naming heatwaves and categorising them similar to cyclones, but instead of being coded by temperature they will be ranked according to their risk to human health – and specifically, the risk of death.

For example, a category 1 heatwave might occur when the daily mortality rate was expected to climb by 10% on a normal day, with category 2 and 3 heatwaves rising further.

When a category 3 heatwave would be declared, it may lead to the opening of swimming pools and air-conditioned shelters to the public, the activation of check-in services for the elderly, or a ban on utility companies cutting off the power for the period of the heatwave to ensure access to air conditioning.

Dr Sarah Perkins-Kirkpatrick, a climate scientist at UNSW Canberra’s ARC Centre of Excellence for Climate Extremes, said it was a “great idea” that should be adopted in Australia.

“I think naming [weather events] helps people to connect with them on a personal level. It’s personifies it,” Perkins-Kirkpatrick said. “But for example, Cyclone Tracy – just the name itself evokes how severe it was and the impact it had.

“It’s also an exercise in science communication. It helps people say, ‘oh, there’s a heatwave, I need to take cover and do this, or do that’.”

Dr Alistair Hobday, a research scientist at the CSIRO who was part of the team that proposed an informal system used to categorise and name marine heatwaves, said while he was cautious about naming systems, the value of the Californian approach was the way it suggested action.

“I think we’re going to see many people in Australia experience events they have never experienced and they won’t know how to respond. This will help with that risk,” Hobday said.

“At the moment it’s left up to individuals, but we know wealthier individuals survive events better than poorer individuals because they have more resources. Legislating this will require resources to be made available to everyone.”

Australians might be keenly familiar with heatwaves but Perkins-Kirkpatrick said many people were unaware of just how dangerous they were or their role as the country’s “most deadly natural disaster”.

“Heatwaves kill more people in Australia than all other natural disasters combined by a long shot,” she said. “And one fun fact: more people die on 27 January from extreme heat than they do on any other day of the year, because it’s the day after Australia Day.

“Everyone’s dehydrated, they’re out in the sun, they’ve been drinking beers, their body starts to suffer heatstroke and they get rushed to hospital.”

The Bureau of Meteorology currently has no plans to adopt a naming convention for heatwaves but it does publish a heatwave intensity map, run a forecast service and already categorises heatwaves by intensity.

Formalising this has sometimes proven tricky, as defining the length, breadth and areas affected by a heatwave is not easy – a category 3 heatwave might be declared in Melbourne but a category 2 heatwave may occur in Geelong during the same event.

There is no global standard for what makes a heatwave, though in Australia it is defined as three or more days in a row when both daytime and night-time temperatures are unusually high relative to local conditions and recent history.

The good news, Perkins-Kirkpatrick said, is that with the work done by the Bureau of Meteorology, Australia was already “halfway there” to setting up such a system.

“We’ve only had a heatwave forecast for about a decade here. The bureau’s done a damn good job to get that together,” she said. “I think it’s a great idea, and it’s something we need to push for. It isn’t easy, but that doesn’t mean it’s not worthwhile.”

6 Things to Know About Climate Change and Heat Waves