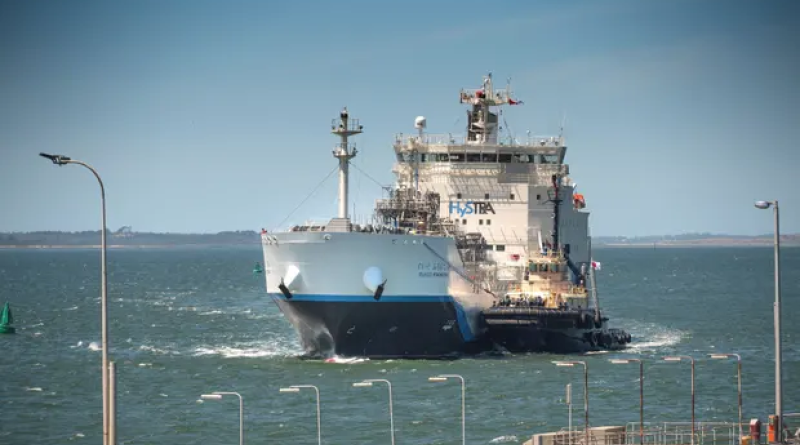 A world-first shipment of liquid hydrogen from Australia was declared momentous – a pivotal moment as the world clambers for clean liquid fuels to bring global greenhouse gas emissions to zero.

Prime minister Scott Morrison said the consignment – loaded on to a purpose-built Japanese ship at the Port of Hastings in Victoria – marked the beginning of a new clean energy export industry for Australia.

Despite the celebratory fanfare and two government ministers at the port for a photo-op, the reality is something different.

Experts say the climate credentials of the technology being used to produce the hydrogen – using brown coal – are highly questionable.

“The project’s current configuration is not clean. In fact, it is incredibly dirty,” said Kobad Bhavnagri, head of industrial decarbonisation at Bloomberg NEF.

So what is actually happening?

The Hydrogen Energy Supply Chain (HESC) project is a $500m pilot that launched in 2018. The Australian government has given $57m to the project so far.

This week the Suiso Frontier will depart Victoria with the first load of super-cooled liquid hydrogen ever to be transported by sea.

Temperature Check asked how much hydrogen was loaded, but HESC didn’t respond. A fact sheet has said the pilot phase would produce up to three tonnes (global demand for hydrogen is currently about 90 million tonnes).

Energy minister Angus Taylor said the shipment demonstrated the project could be “a major source of clean energy”.

Both the government and HESC said a commercial phase of the project would produce 225,000 tonnes of “carbon neutral” hydrogen a year.

Even if the project backers decide to move to a commercial phase (and that is a huge if), studies show hydrogen produced using the same method would be dirtier than if it was produced from gas and much dirtier than making hydrogen from renewables.

The HESC consortium of five Japanese companies, together with AGL, won’t decide to go ahead with a commercial scale operation until an assessment of the pilot phase, expected to be complete next year.

To bring emissions down, HESC says a commercial operation would capture CO2 released during one of the stages of production (the gasification phase carried out in the Latrobe Valley) and then use the Victorian government’s CarbonNet project to store the CO2.

But the CarbonNet project – which is targeting potential geological formations off the Victorian coast – doesn’t yet exist and, if it does go ahead, the Victorian government says it won’t start operating until the end of this decade.

All of this raises the prospect of coal-based hydrogen – which the Morrison government is happy to describe as “clean” – hitting a global market at a time when some analysts believe it will be already priced out by zero-emissions hydrogen derived from renewable energy.

Bhavnagri told Temperature Check he doubts using coal to make hydrogen could have any commercial success.

“If it’s more complex and more costly and more polluting than making hydrogen from renewables, why would you do it?”

A quick hydrogen production 101 might help here. There are broadly three ways hydrogen is being produced.

One uses steam to separate hydrogen from “natural” gas. Another uses oxygen and coal under high pressures. A third passes electricity through water in an electrolyser, producing hydrogen and “waste” oxygen.

The first two methods generate high levels of CO2 – more than if you just burned the fossil fuel. But that pollution can potentially be lowered if the CO2 can be captured and stored.

The electrolysis method can produce genuinely clean hydrogen with almost no emissions if the electricity comes from renewables.

The HESC pilot used the coal gasification method and is proposing to add carbon capture and storage if moved to a commercial scale. A pilot coal gasification and refining plant has been built at Loy Yang and a demonstration plant to cool the hydrogen was built at the port.

Could this hydrogen ever be clean?

Dr Fiona Beck, an expert on the nascent hydrogen industry as a way to cut emissions, says there is no agreed definition for “clean” hydrogen.

But she says turning fossil fuels into hydrogen is always going to be dirtier than using renewable energy.

In a study published late last year, Beck and colleagues at the Australian National University compared the amount of CO2 released when hydrogen is produced using different methods.

Using the same approach as is proposed for the HESC project, hydrogen from brown coal would release 40kg of CO2 for each unit of energy (a gigajoule).

Beck says hydrogen with those levels of emissions would be too dirty to be considered “low carbon” under a Europe-based certification scheme for hydrogen.

Crucially, that level of emissions also presumes 90% of the CO2 released from the brown coal during the gasification phase can be captured and permanently stored.

Beck says: “That’s very ambitious and while it’s theoretically possible, there is no large-scale commercial plant to have demonstrated anywhere near that sort of capture rate.”

She says one positive aspect of the trial is the development of a ship that can carry liquid hydrogen. “It’s important to get the ship and also the port facilities working, even on a pilot scale,” she said.

The ship is also a trial version, with a tank installed that can carry 1,250 cubic metres of hydrogen that’s cooled to -253C. Cooling the gas turns it into a liquid that is then one 800th of its original volume.

Kawasaki Heavy Industries has said a commercial-size ship it wants to build would have a 160,000 cubic metre capacity – about 120 times bigger than the ship that docked at Port of Hastings.

Among this sea of uncertainty around the project was one statistic repeated in the government’s media release and from the project itself.

If the HESC project did move to a commercial phase, it could produce 225,000 tonnes of “carbon neutral liquefied hydrogen” annually that would “help reduce global emissions by around 1.8 million tonnes per year.”

Greenhouse gas emissions from producing hydrogen from coal are generated all the way along the supply chain – from the mining of the coal, to gasification, trucking, liquifaction and shipping.

Temperature Check asked HESC to explain how the hydrogen would be “carbon neutral” and which steps in the supply chain would be included, but details were not provided.

This column also asked the office of Angus Taylor what the estimated savings were based on, but did not receive a response before publishing.

But in any case, should we be impressed by an annual saving of 1.8m tonnes of CO2?

The gasification of the coal and the refining of the hydrogen is taking place at a facility next door to AGL’s Loy Yang coal power station in the Latrobe Valley.

According to the Clean Energy Regulator, that power station is currently emitting 16.9m tonnes of CO2 a year.

So the power station emits more than nine times as much CO2 as the HESC project says it might save each year if it goes ahead.

A HESC statement said using Latrobe Valley coal with CCS at scale and improvements to the liquefaction process, “should have a significant cost and scale advantage over hydrogen produced with electrolysis.”

The statement said “biomass” was blended with coal to increase the purity of the hydrogen, but when asked, HESC did not say what that biomass was.

“The HESC pilot has furthered Australia’s knowledge of hydrogen production, liquefaction, storage and transport. This technical knowledge, and the infrastructure from a commercial scale HESC project, paves the way for future hydrogen projects of all types as part of Australia’s transition to lower emissions.

“The next phase for the project is to examine in detail all elements of the HESC pilot. This analysis will determine a potential path to commercialisation and is anticipated to continue through to mid 2023.”

In an editorial, the Australian Financial Review declared the hydrogen shipment an “important milestone” and an occasion that “may prove as important” to the country’s prosperity as its first shipment of iron ore in the 1960s.

But the newspaper made a declaration that making hydrogen from coal or gas with the emissions either captured or offset “is currently the only technological [sic] possible and cost-effective method of hydrogen production.”

Remembering the HESC plan for “clean hydrogen” relies on a CCS project that doesn’t yet exist and may not start operations until 2030, the International Energy Agency says right now electrolysers “have reached enough maturity to scale up manufacturing and deployment to significantly reduce costs”.

Analysis from BNEF predicts that by 2030, the cost of hydrogen from renewables could be as low as $1 per kg.

COVER PHOTO: This week the Suiso Frontier will depart Victoria with the first load of super-cooled liquid hydrogen ever to be transported by sea. Photograph: HySTRA/Reuters