Covid denial to climate denial: How conspiracists are shifting focus 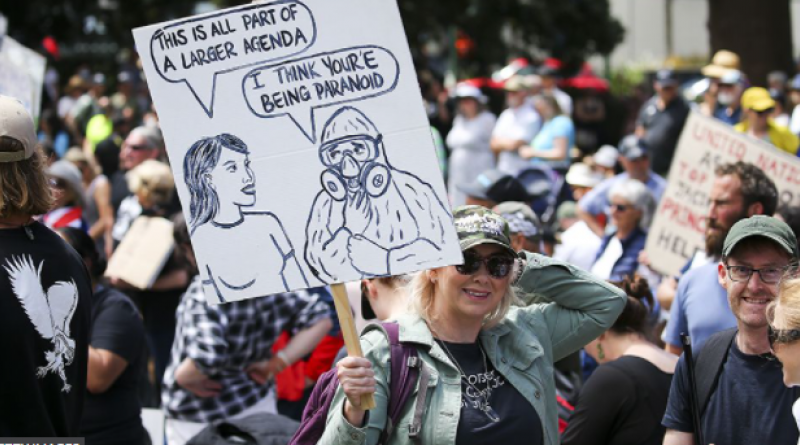 Members of an online movement infected with pandemic conspiracies are shifting their focus - and are increasingly peddling falsehoods about climate change.

Matthew is convinced that shadowy forces lie behind two of the biggest news stories of our time, and that he's not being told the truth.

"This whole campaign of fear and propaganda is an attempt to try and drive some agenda," he says. "It doesn't matter whether it's climate change or a virus or something else."

Originally from the UK, Matthew has been living in New Zealand for the past 20 years. The country is one of several that have aimed to completely stamp out Covid-19 through strict lockdowns.

Troubled by the New Zealand government's approach, he turned to social media for news and community. The online groups he joined - opposed to vaccines and masks - exposed him to completely unfounded conspiracies about sinister global plots behind the Covid-19 pandemic.

His immersion in this conspiratorial world has coloured his outlook and affected his relationships. He's speaking to me on a video call while hidden away at the end of his garden, because he's afraid his partner - who doesn't share some of his views - might hear him.

And recently, groups like the ones he's a part of have been sharing misleading claims not only about Covid, but about climate change. He sees "Covid and climate propaganda" as part of the same so-called plot.

It's part of a larger pattern. Anti-lockdown and anti-vaccine Telegram groups, which once focused exclusively on the pandemic, are now injecting the climate change debate with the same conspiratorial narratives they use to explain the pandemic.

The posts go far beyond political criticism and debate - they're full of incorrect information, fake stories and pseudoscience.

According to researchers at the Institute for Strategic Dialogue (ISD), a think tank that researches global disinformation trends, some anti-lockdown groups have become polluted by misleading posts about climate change being overplayed, or even a so-called "hoax" designed to control people.

"Increasingly, terminology around Covid-19 measures is being used to stoke fear and mobilise against climate action," says the ISD's Jennie King.

She says this isn't really about climate as a policy issue.

"It's the fact that these are really neat vectors to get themes like power, personal freedom, agency, citizen against state, loss of traditional lifestyles - to get all of those ideas to a much broader audience."

One group which has adopted such ideas is the White Rose - a network with locally-run subgroups around the world, from the UK to the US, Germany and New Zealand - where Matthew came across it.

"It's not run by any one or two people," Matthew explains. "It's kind of a decentralised community organisation, so you obtain stickers and then post them on lampposts and things like that."

These stickers bear slogans with anti-vaccine, anti-mask and conspiratorial content, including slogans such as "Resist the New Normal", "Real Men Don't Wear Masks", and false statements such as "There Is No Pandemic". Matthew first joined his local White Rose channel after seeing it advertised on a sticker - and he now puts up the same slogans on lamp posts around his home near Auckland.

The Covid deniers have been humiliated but they are still dangerous.