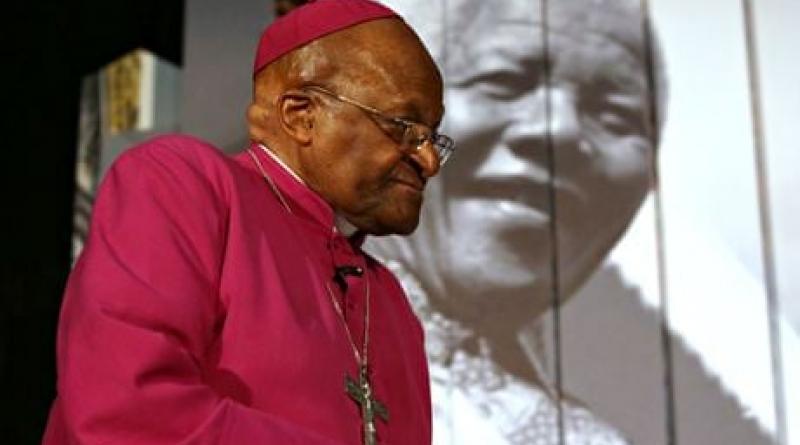 Nobel peace prize winner calls for organisations to cut ties with industry and for investors to dump fossil fuel stocks.

Archbishop Desmond Tutu has called for an anti-apartheid-style boycott and disinvestment campaign against the fossil fuel industry for driving global warming, just days ahead of a landmark UN report on how carbon emissions can be slashed.

In an article for the Guardian, the archbishop writes: "We live in a world dominated by greed. We have allowed the interests of capital to outweigh the interests of human beings and our Earth. It is clear [the companies] are not simply going to give up; they stand to make too much money."

Tutu, one of the most revered figures of South Africa's anti-apartheid struggle and a key backer of the economic and moral campaigns that helped end the system, says: "People of conscience need to break their ties with corporations financing the injustice of climate change. We can, for instance, boycott events, sports teams and media programming sponsored by fossil-fuel energy companies."

The Nobel peace prize winner also called for investors to dump their fossil fuel stocks: "It makes no sense to invest in companies that undermine our future. Already some colleges and pension funds have declared that they want their investments congruent with their beliefs."

The archbishop's intervention, just before the Intergovernmental Panel on Climate Change report, due out on Sunday, is the strongest yet in a rapidly growing global campaign against oil, gas and coal firms that is uniting anti-global warming activists with financial institutions who want to avoid a trillion-dollar crash in fossil fuel stocks.

A leaked draft of the Intergovernmental Panel on Climate Change report states that, to avoid dangerous levels of warming, investment in fossil fuels must start falling by tens of billions a year.

The good news, says Tutu, is that a divestment campaign has begun, started 18 months ago in the US. And it has grown faster than campaigns that targeted apartheid, tobacco and arms manufacturers, according to Oxford University research.

The research has shown that past divestment campaigns succeeded by stigmatising their targets – using "moral pressure" according to Tutu – and exerting financial pressure.

In the UK campaigners are targeting the £5bn of fossil fuels stocks owned by UK universities and, last month, the country's top doctors called for urgent divestment.

"Those who profess to care for the health of people perhaps have the greatest responsibility to act," wrote Sabaratnam Arulkumaran, president of the British Medical Association, and Fiona Godlee, editor in chief of the British Medical Journal. "Firstly, we should push our own organisations – universities, hospitals, primary care providers, drug and device companies – to divest from fossil fuel industries completely and as quickly as possible and reinvest in renewable energy sources."

Tim Ratcliffe, European divestment coordinator for the campaign group 350.org, said: "It was a turning point when physicians spoke out against investments in the tobacco industry. This should serve as a wake-up call to investors to pull their money out of high-carbon assets."

The Norwegian finance ministry, which manages the $850bn fund, said: "An expert group will evaluate whether the exclusion of coal and petroleum companies is a more effective strategy for addressing climate issues and promoting future change than the exercise of ownership and exertion of influence."

Other investors, including the Ceres coalition which manages $3tn collectively, have demanded fossil fuel companies confront openly the risk of a "carbon bubble", by either diverting their investment to clean energy or giving the money back to shareholders.

The bubble risk exists because only a third of the reserves currently on the books of fossil fuel companies can be burned if the world is to have a good chance of restricting climate change to 2C, a goal to which the world's governments are already committed. If global action is taken to slash carbon emissions those reserves become worthless, or "stranded assets".

However, fossil fuel firms still spend huge sums – about $650bn in 2013 – exploring for new oil, gas and coal to add to the stockpile, despite declining profits.

Citi bank, HSBC, Deutsche Bank and Goldman Sachs, as well as ratings agencies Standard and Poor's and Moodys, are among the big financial players who have already warned investors of the carbon bubble risk.

The leaked IPCC draft, seen by the Guardian, says this trend of rising investment in fossil fuel extraction and power plants needs to switch into reverse, falling by $30bn a year until 2030, if carbon emissions are to be cut sufficiently to have a good chance of limiting climate change to 2C.

At the same time investment in low-carbon electricity supplies, such as renewables and nuclear, will have to rise by $147bn a year, while investment in energy efficiency in transport, buildings and industry will have to increase by several hundreds of billions of dollars a year.

The IPCC report also warns that cutting carbon emissions may devalue fossil fuel assets, especially coal. Stocks in most companies mining for coal, the dirtiest fuel of all, have already plunged steeply since 2012.

China, the biggest importer of coal, is taking action to curb its use in the face of appalling air pollution, and new research concludes that two in every five coal-fired power stations could become stranded assets in next 40 years.

In the US, five coal mining companies, equal to $4bn in assets, have filed for bankruptcy since 2007, while from 2011-2013 coal stocks in the US fell 60%. However, the shale gas boom in the US has been a significant factor in making coal uneconomic.

The world's biggest oil company, ExxonMobil, was forced last month to publish a report explaining how it was going to adapt its business to a world in which emissions were limited. But while the shareholders that demanded the move welcomed the new transparency, ExxonMobil concluded it was "highly unlikely" that global governments would cut carbon sufficiently to keep climate change under the internationally agreed 2C limit.

"Investors now know that ExxonMobil is not considering a low-carbon scenario in its planning, which places shareowner capital at risk," said Natasha Lamb, director of equity research and shareholder engagement at Arjuna Capital, which helped force the disclosure. "We want to engage the companies head-on so there is not a calamity, as we got with the tech bubble, the financial services bubble and the housing bubble. But if Big Oil can't redirect capital to low-carbon energy alternatives, investors will [by divesting]."

BP, Shell and Total are all discussing the carbon bubble risk publicly to some extent but Chevron has refused to do.

"We have now called the bluff of the oil companies to indicate what carbon trajectory they are betting on," said James Leaton, research director at the analysts Carbon Tracker, which has pioneered the financial analysis of the carbon bubble. "Now it is up to the investors to act on that."

Carbon Tracker research suggests carbon capture and storage – which would clean up fossil fuel burning by burying its emissions – will be able to deal with just 4% of total global reserves.

"There is a momentum gathering," Leaton said. "Whether it is investors in Australia or Norway, people have seen there is less upside to coal and the amount of capital expenditure going into coal seems to have peaked. We're really pleased that there is now a recognition that doing nothing and hoping it will be all right is not an option."