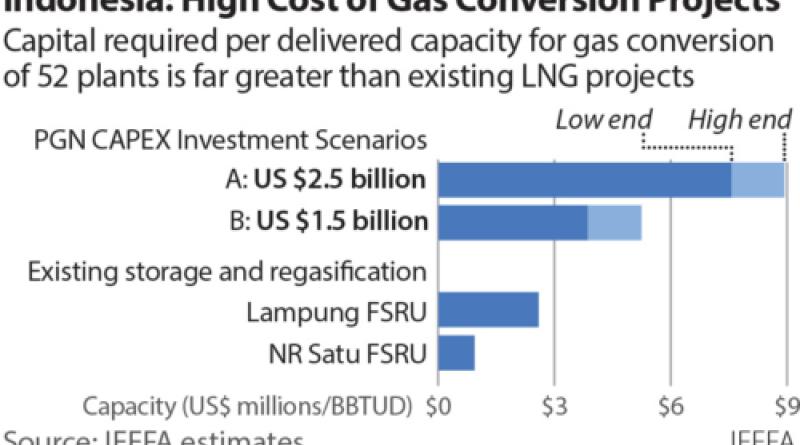 Deploying new small-scale LNG is an uphill battle for PGN

26 August (IEEFA Indonesia): Indonesian gas is currently in a precarious position, where the government needs to find new domestic demand to absorb surplus gas coming into the market amidst expiring export contracts. According to the Institute for Energy Economics and Financial Analysis’ (IEEFA) new report, small-scale liquefied natural gas (ssLNG) has been re-proposed in Indonesia to create new market demand and to expand gas use in the power sector by replacing high-cost fuel oil. However, the economics of this gas conversion plan are problematic. 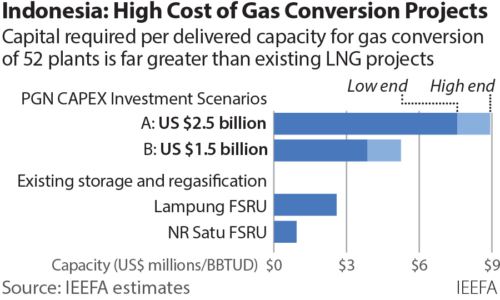 ssLNG is a niche segment of the gas industry, which involves a scaled-down version of LNG operations, transporting less than 0.5 million metric tonnes of LNG per year.

“PGN estimated an investment of US$1.5bn to US$2.5bn will be required to deliver 167 Billion British Thermal Unit per Day (BBTUD) of gas to these 52 plants, with half of them using less than 2 BBTUD,” says Adhiguna.

The plan has been a decade in the making. PLN, which previously took the lead in the ssLNG supply chain establishment, has now moved to the receiving end, shifting nearly all the risk to PGN.

The current gas conversion plan would clearly benefit PLN if the gas could indeed be delivered cheaply to its plants.

“What is less clear is whether PGN, a State-Owned Enterprise (SOE) subsidiary with a sizeable public ownership can survive this arrangement. Supply chain cost of LNG is known to be costly, and even more so at a smaller scale,” says Adhiguna.

“The rising urgency for the government to build gas demand is evident in the new gas pricing policy, which cut the government’s revenue share from gas production to suppress the downstream gas price. The potential loss in state revenue was claimed to be offset by savings on subsidies and an increase in economic activities, including IDR 13 trillion in savings from the gas conversion plan.”

A year on, little progress has been made.

“As a major local gas distributor, PGN is already under stress due to the impacts of COVID-19 and the new gas pricing policy. With its distribution margin expected to decline from $2.2-2.5 to $1.8-2.00/Million BTU, the alarm bells are already ringing,” says Adhiguna.

“Competing priorities with other projects is tight. In 2020, PGN allocated less than US$14 million for the conversion project out of the company’s US$300 million capex. Its 2021 capex plan also does not align with the two-year conversion deadline mandated by the government.”

While PGN has repeatedly stated that it is ‘ready’ for the gas conversion project, the company has not yet disclosed how the investment will be scaled in the coming years and its impact on the company’s financials. With approximately US$2bn of debt maturing in 2024, the company needs to ensure its financials remain stable to service the debt.

So far, there has been little mention on how government support for PGN will be given.

The economics of ssLNG for PGN will be stress-tested by investors. With existing total assets of US$7.5bn, transmission volumes of more than 1,250 BBTUD, and 820 BBTUD of distribution volumes in 2020, PGN investors will be cautious about the merits of a US$1.5bn investment that will only result in 167BBTUD of additional delivery capacity.

“There is a reason why ssLNG has been on the drawing board for such a long time, justifying its economics is a big challenge,” says Adhiguna.

“The capital needed per unit of delivered capacity is more than two to four times the investment required for existing conventional-scale LNG projects.

“ssLNG loses the edge on economies of scale. The cost for conventional LNG supply chains typically accounts for 10-20% of the total gas price, while the planned ssLNG supply chain potentially costs 30-50% of the gas price.”

In an industry that emphasizes capital discipline, investors will pay close attention to PGN’s past LNG investments, such as the low utilization of FSRU Lampung, while remaining mindful of the inconsistent history of PLN gas demand.

It’s very clear that Indonesia faces a two-fold challenge to build a gas market as soon as possible, while simultaneously managing a rapid gas production decline risk in the coming decades. Other policy decisions have dictated the need to create more demand for domestic gas, but it will be crucial to get the economics right, as sudden policy manoeuvres can reverse investment fundamentals in a heartbeat.

PGN would be wise to tread carefully, as many are watching closely.

Indonesia utility will finish building 20GW of coal capacity before turning to renewables.