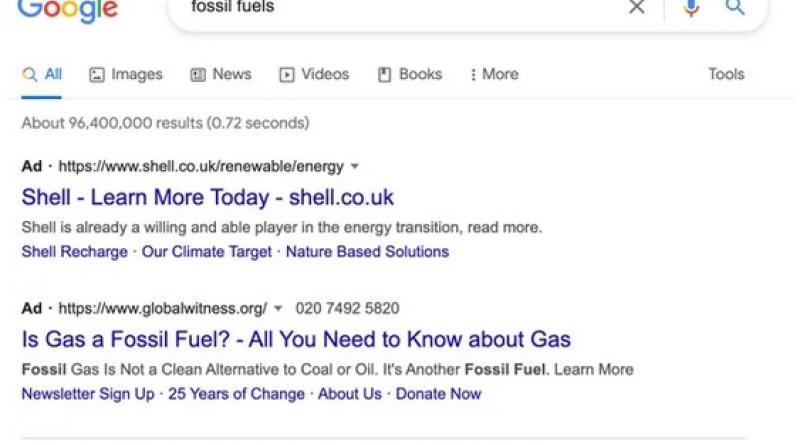 One in five ads served on search results for 78 climate-related terms placed by firms with interests in fossil fuels, research finds

Fossil fuel companies and firms that work closely with them are among the biggest spenders on ads designed to look like Google search results, in what campaigners say is an example of “endemic greenwashing”.

The Guardian analysed ads served on Google search results for 78 climate-related terms, in collaboration with InfluenceMap, a thinktank that tracks the lobbying efforts of polluting industries.

The results show that over one in five ads seen in the study – more than 1,600 in total – were placed by companies with significant interests in fossil fuels.

Advertisers pay for their ads to appear on the search engine when a user queries certain terms. The ads are appealing to businesses because they are very similar in appearance to search results: more than half of users in a 2020 survey reported they could not tell the difference between a paid-for listing and a normal Google result.

ExxonMobil, Shell, Aramco, McKinsey, and Goldman Sachs were among the top-20 advertisers on the search terms, while a number of other fossil fuel producers and their financiers also placed ads.

Jake Carbone, senior data analyst at InfluenceMap, said: “Google is letting groups with a vested interest in the continued use of fossil fuels pay to influence the resources people receive when they are trying to educate themselves.

“The oil and gas sector has moved away from contesting the science of climate change and now instead seeks to influence public discussions about decarbonisation in its favour.”

Oil major Shell’s ads – 153 were counted in total – appeared on 86% of searches for “net zero”. Many promoted its pledge to become a net zero company by 2050 and align itself with a 1.5C warming target. 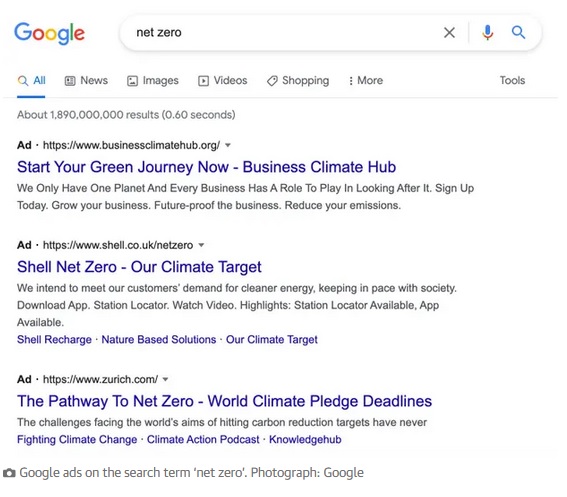 However, Shell’s net-zero strategy relies heavily on carbon capture and offsetting, according to a Carbon Brief analysis, which says: “Despite its ‘highly ambitious’ framing … Shell’s vision of a continued role for oil, gas and coal until the end of the century remains essentially the same.”

A spokesperson for Shell said: “Shell’s target is to become a net zero emissions energy business by 2050, in step with society. Our short, medium and long-term intensity and absolute targets are consistent with the more ambitious 1.5C goal of the Paris agreement.”

Goldman Sachs, which facilitated nearly $19bn of lending to the fossil fuel industry in 2020, had the third highest number of ads. The bank’s ads appeared on almost six in 10 searches for “renewable energy”, with many emphasising its “continued commitment to sustainable finance”.

Alongside its work on sustainable investing, the company receives significant income from fossil fuel clients. In recent years McKinsey has advised 43 out of the world’s 100 most polluting companies, according to the New York Times.

A spokesperson for McKinsey pointed to an op-ed written by a managing partner at the company, which states: “There is no way to deliver emissions reductions without working with these industries to rapidly transition.”

Aramco, the state-owned Saudi oil company, which is the world’s largest oil exporter, had 114 ads on the keywords “carbon storage”, “carbon capture” and “energy transition”. A number of their ads claimed the company “promoted biodiversity” and “protected the planet”.

Melissa Aronczyk, an associate professor at Rutgers University, said: “Since at least the 1980s in the US, there has been a very concerted effort by public relations agents to help polluting companies develop strategies to ‘go green’ while maintaining business as usual.

“Many of the initiatives companies are taking are very piecemeal and will not amount to any kind of long-term or systemic change.”

Johnny White, a lawyer at environmental charity ClientEarth, called for stronger regulation of adverts placed by polluting industries. “Fossil fuel companies spend millions on incredibly sophisticated advertising campaigns, so sorting fact from fiction can be really tricky for the public.

“Damaging greenwashing has become endemic – to stamp it out we need to legislate bans on all fossil fuel advertisements, just like what happened with tobacco.”

The analysis also looked at “snippets”, which are not paid-for but are chosen by Google’s algorithm as the most relevant result. The Guardian found the snippet chosen for “fracking” linked to the website of an oil and gas lobby group, the Independent Petroleum Association of America. 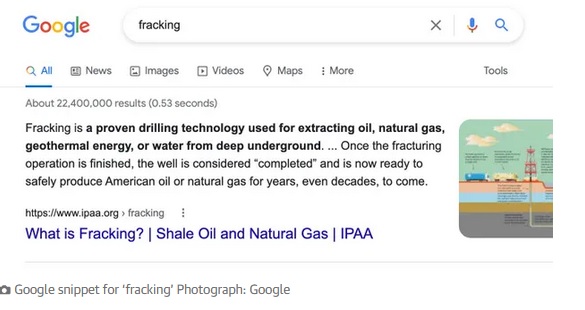 In answer to the question: “Is fracking a threat to public health?”, the IPAA page states: “No. In fact, there is ample evidence that increased natural gas use … has improved public health by dramatically improving air quality in recent years.”

A years-long piece of research by the US Environmental Protection Agency concluded in 2016 that in some cases fracking had harmed drinking water supplies.

Unlike Facebook, Google does not have a publicly accessible ad library, meaning it is difficult to analyse advertising on the platform. In the EU and UK, Google only provides comprehensive data on ads which directly mention politicians or a political party, or those which feature a referendum question.

A spokesperson for Google said: “We recently launched a new policy that will explicitly prohibit ads promoting climate change denial. This policy applies to all advertisers, including energy companies and financial institutions, and we will block or remove any ads that contain violating content.

“When search ads do appear, they have the word “Ad” clearly labeled in bold black text in the current design. We rely on extensive user testing both on mobile and desktop to ensure ad labels meet our high standards for being prominent and distinguishable from unpaid results.”

A spokesperson for ExxonMobil said: “ExxonMobil has contributed to the development of climate science for decades and has made its work publicly available. And as the scientific community’s understanding of climate change developed, ExxonMobil responded accordingly.”

Aramco and Goldman Sachs did not respond to requests for comment.

It’s time we scrubbed the greenwash off the oil industry