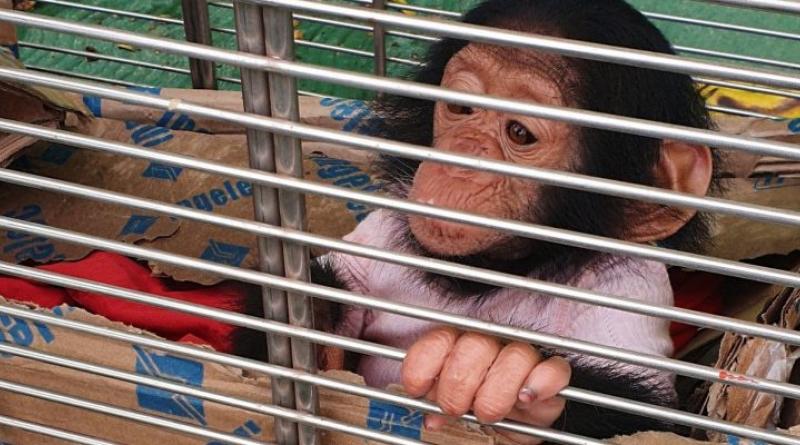 An alleged wildlife trafficker is in custody at the judicial police of Koumameyong, northeast Gabon. She was arrested for illegally holding a baby chimpanzee and a sign. In Gabon, signs and large primates are fully protected by the wildlife law.

The Gabonese authorities are redoubling their vigilance in the application of the wildlife law, in particular Decree No. 0162/PR/MEF of January 19, 2011 determining the modalities of ascertainment and repression of certain offenses in the field of water and forestry. An alleged trafficker has just fallen under this decree, and will have to explain herself before the courts.

It is difficult to know at this time if the person concerned was aware of the risks linked to the possession of the two primates. They are a baby chimpanzee and a cercopithecus moustac called more commonly “red tail”. Before their seizure by the authorities, the two animals spent nearly three weeks in illegal detention at the suspect’s home in Koumameyong, a locality located in northeastern Gabon. The operation that led to the arrest of the suspect was carried out by a joint team composed of agents from the Makokou Judicial Police, the Ogooué-Ivindo Provincial Directorate of Water and Forests and the Anti-Poaching Directorate (DLCB), technically supported by Conservation Justice, a non-governmental organization (NGO) working for wildlife law enforcement.

Risk of exposure to zoonotic diseases

Keeping wild animals in captivity poses a serious risk of exposure to zoonotic diseases, i.e., diseases transmitted by animals. By preserving wildlife in its original ecosystem, human health is protected from the risk of a pandemic such as Ebola, an epidemic that is still poorly controlled in Central Africa. Tuberculosis can also be transmitted through monkeys.

And epidemics of emerging viruses linked to zoonoses are increasingly responsible for diseases, such as coronavirus or monkey pox. In a recent report, the World Health Organization (WHO) reports nearly 1,400 cases of monkeypox in seven African countries: Cameroon, Central African Republic (CAR), Democratic Republic of Congo (DRC), Liberia, Nigeria, Republic of Congo and Sierra Leone.

“This should attract more epidemiological surveillance and above all strengthen deterrents to discourage wildlife capture and detention practices. In any case, it is essential that the population be informed of the risks and avoid close contact with primates, whether they are small monkeys (cercopithecus, cercocepha, colobus, mandrills, mangabeys) or great apes (chimpanzees, gorillas),” said Conservation Justice.

Gabon will be paid by Norway to preserve its forests.

Gabon is first African country paid to protect its rainforest.