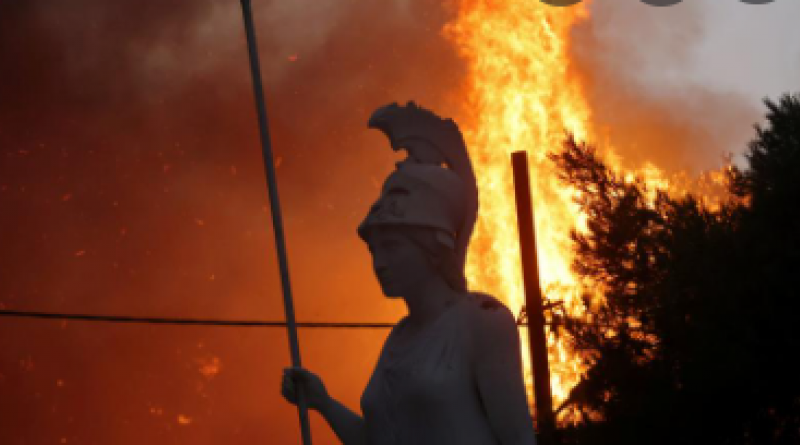 More than 40 fires are burning across Greece, write Marina Rigou in Athens and Nikolia Apostolou in Kalamata

Thousands of people have been evacuated from Varibobi, a northeastern suburb of Athens, and more than 100 homes and businesses have been destroyed as helicopters, planes and ground forces wrestle to bring a fire that started on Tuesday under control.

A total of 77 people have been transferred to hospital with respiratory problems, according to state officials, and winds were expected to increase on Wednesday afternoon as the fire continues to burn through Varibobi and the pine forest of Parnitha.

Meanwhile Greece’s coastguard service was helping with evacuations on the island of Evia, where residents escaping wildfires had fled to a beach for safety.

Thousands of wild animals are said to have been burned in the fire.

On Tuesday, dozens of horses roamed the streets of Varibobi after the owners of the area’s four horse farms were unable to evacuate them. A few hours later, many of the animals were transferred to a safe farm.

A thick cloud of smoke has covered the Greek capital since the wildfire started burning more than 24 hours ago. The National Observatory of Athens has advised locals and visitors to stay indoors, due to the high concentration of microparticles in the air.

The northeastern suburbs of Athens were severely affected last winter when a cold weather front with lots of snow and low temperatures, named Medea, left hundreds of homes without electricity and water for a whole week.

Locals like 71-year-old Yannis Paraskevopoulos, who used to walk in the forest daily, believe the trees and branches that fell on the ground due to the heavy snowfall became the perfect fuel for this fire.

“We were lucky that our house wasn’t burnt because at the last minute the direction of the wind changed,” Paraskevopoulos explains. “We got a text message ordering us to evacuate. We left, but a few hours later we returned with my son and took turns sleeping.”

The situation has been made worse as temperatures have risen to around 45C as the region experiences some of the hottest conditions in Europe amid one of the longest heatwaves in 30 years. The heatwave is expected to last until the end of the week, but a new one is expected on Monday.

Since Tuesday, 41 fires have started across Greece, with the biggest in the regions of Kalamata, Mani, Evia and Olympia. Homes are currently burning in Evia and Olympia, and according to reports from Greek media there are people trapped by the fire.

Outside Athens, thousands of olive trees and other farms have been destroyed. Homes were left without electricity or a water supply due to the fire. Authorities say it will take days to repair the damage.

After a decade of austerity, due to the economic crisis that started in 2008, the Greek fire department has been left understaffed and unequipped, while forest roads used by fire trucks in case of an emergency haven’t been maintained.

Nearby Turkey is also experiencing its worst wildfires in a decade.

According to the Copernicus Atmosphere Monitoring Service (CAMS) – the European Union’s Earth observation programme – all of “southeast Europe [is] currently experiencing heatwave conditions, [and] the fire danger remains high in the area, especially across much of Turkey and around the Mediterranean”.

CAMS data shows that the daily total fire radiative power for Turkey has reached unprecedented values in the entire dataset, which goes back to 2003.

The Copernicus data shows that the emissions from and intensity of wildfires are rapidly increasing, and not only Turkey and Greece, but also Morocco, Albania, North Macedonia and Lebanon are affected.

An EU disaster response group said assistance, including firefighters and water-dropping planes, was being sent from EU member states to Italy, Greece, Albania and North Macedonia.