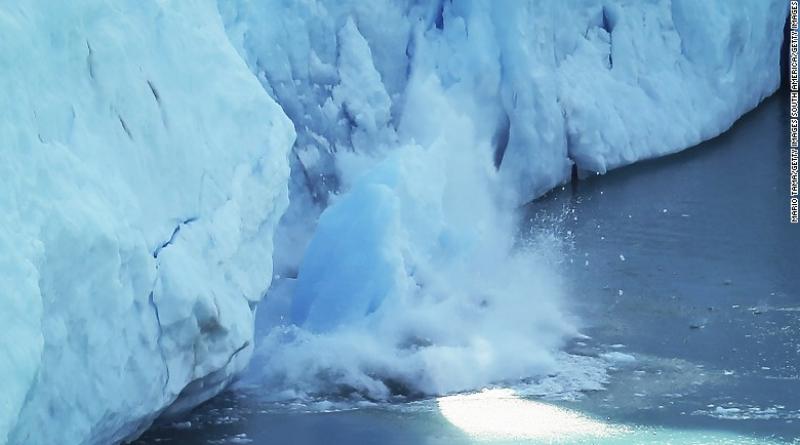 Greenland's ice sheet usually melts during the summer, but the melt season typically begins around the end of May; this year it began at the start. It has been melting "persistently" over the past four months, which have recorded all time temperature highs, according to Ruth Mottram, a climate scientist with Danish Meteorological Institute.

This July alone, Greenland's ice sheet lost 197 billion tons of ice -- the equivalent of around 80 million Olympic swimming pools -- according to Mottram. She told CNN the expected average would be between 60-70 billion tons at this time of year.

The weather conditions that brought a heat wave to Europe last week have reached the Arctic, where scientists say they could trigger one of Greenland's biggest ice melts since 1950, when reliable records began.

Scientists recorded unconfirmed temperatures of 2.7C at 3,000 meters above sea level on Thursday, which would be close to a new record if confirmed.

It came on the same day as meteorologists reported that globally, this July has been as hot as any month in recorded history.

Global average temperatures for July are on par with, and possibly higher, than those of the current record holder, July 2016, according to preliminary data for July 1-29 released by the Copernicus Climate Change Programme, which analyzes temperature data from around the planet. The final data will be released Monday.

Mottram said Greenland's warm weather is set to continue for the next few days, perhaps longer. With the melt season typically lasting to the end of August, she said the ice sheet is likely to see continued substantial melting, although not necessarily as much as in recent weeks.

Greenland's ice sheet is the second biggest in the world and this season's ice melt has already contributed around half a millimeter to global sea levels.

It comes in a summer where the Arctic has experienced "unprecedented" wildfires, which scientists say have been facilitated by high temperatures.

Since the start of June, Copernicus Atmosphere Monitoring Service (CAMS), has tracked more than 100 intense wildfires in the Arctic Circle.

Temperatures in the Arctic are rising at a faster rate than the global average, providing the right conditions for wildfires to spread, Mark Parrington, a senior scientist at the European Centre for Medium-Range Weather Forecasts (ECWMF), told CNN last week.