How banking bosses are linked to the world’s dirtiest fossil fuel. 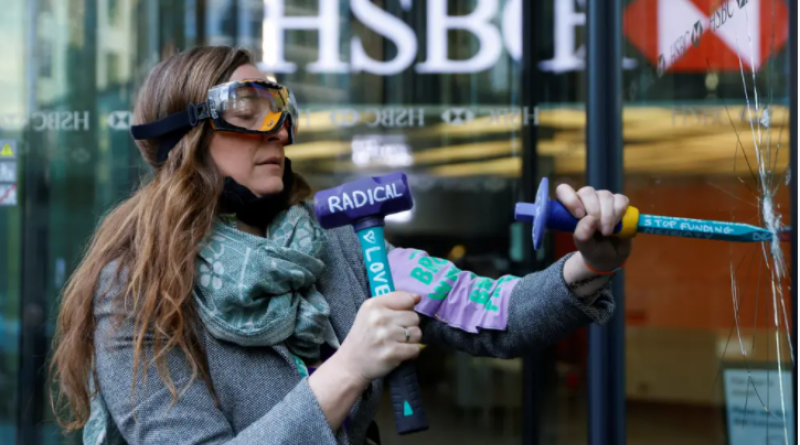 Exclusive: Analysis reveals directors at three of the UK’s five largest banks have ties to the coal industry.

Campaigners have called for greater regulation of banks’ carbon-cutting measures as analysis reveals directors at three of the UK’s five largest banks have ties to coal – the world’s dirtiest fossil fuel.

With six months until Cop26, when nations will gather in Glasgow to pledge action on the climate crisis, banks have also made their own promises to cut down support for fossil fuels.

But an investigation by The Independent and DeSmog has found that non-executive directors from HSBC, NatWest and Standard Chartered have current or past links to companies included on the Global Coal Exit List, a comprehensive database of firms involved in the global coal supply chain.

Campaigners say this shows a “conflict of interest” that means banks should not be trusted to set their own targets on decarbonisation – calling for more action from regulators such as the Bank of England instead.

The Independent’s Stop Fuelling the Climate Crisis campaign is shining a light on the role that UK banks are playing in providing financial support for fossil fuels across the world.

Coal-fired power is the single largest driver of global temperature rise and phasing it out of the world’s electricity supply as soon as possible will be key to meeting the world’s climate goals, experts say.

The analysis found directors with links to coal include Dr Byron Grote, a non-executive director at Standard Chartered who is also a senior independent director at Anglo American, a multinational mining company that produces coal as well as platinum, diamonds, copper and iron ore.

A recent report led by the Rainforest Action Network, an environmental group, found that HSBC provided around £80bn in financial support for all types of fossil fuel projects from 2016 to 2020, while Standard Chartered spent £23bn and NatWest provided £10bn.

The connections between UK banks and coal companies reveal a “conflict of interest”, according to Molly Scott Cato, a former MEP and the Green Party’s financial spokesperson.

Such an alleged conflict of interest “may help to explain why they have dragged their heels over divesting from fossil fuels,” she added.

All three banks have made commitments when it comes to funding coal. HSBC recently pledged to end coal financing by 2040; NatWest plans to phase out coal by 2030; and Standard Chartered has promised to only provide financial services to companies who are less than 5 per cent dependent on coal by 2030.

However, campaigners have said pledges made by banks are not ambitious enough – and many have called for the Bank of England to do more to regulate how high-street lenders provide support for fossil fuels.

“UK banks are the worst in Europe for funding fossil fuels, with Barclays and HSBC alone pouring more than $225bn (£185bn) between 2016 and 2020 into some of the most environmentally damaging fossil fuels, including coal,” Simon Youel, head of policy at Positive Money, an advocacy group calling for sustainable banking, told The Independent.

“The connections between big finance and fossil fuels show just how deep banks’ vested interests in delaying the green transition are. This is yet another reason why we can’t rely on individual banks to support decarbonisation out of the goodness of their hearts, and why we instead need action from regulators such as the Bank of England to address this systemic failure.”

In his March budget, chancellor Rishi Sunak added climate change to the Bank of England’s mandate to “reflect the importance of environmental sustainability and the transition to net zero”.

A previous investigation by DeSmog found that 50 out of the 64 current directors of Barclays, HSBC, NatWest, Lloyds and Standard Chartered have a past or current connection with some sort of “highly polluting” industry, such as fossil fuel energy production, aviation, roadbuilding or shipping.

This investigation uncovered extensive links between banking directors and the oil and gas industry.

Lucie Pinson, founder and executive director of Reclaim Finance – a group campaigning for an end to financial support for fossil fuels, told The Independent: “It’s no wonder that Barclays is the biggest fossil fuel funder in Europe, given the ties between banks and oil barons.

“As long as fossil fuel and banking executives share the same dinner table, pretensions to ‘green finance’ and ‘responsible investment’ will remain just that: pretensions.”

An HSBC spokesperson said: “Our policies prohibit the financing of new thermal coal mines and new customers dependent on thermal coal mining, and we have not provided project finance for new coal-fired power plants since early 2018.

“We will publish by end 2021 a plan to phase out the financing of all coal-fired power and thermal coal mining by 2030 in markets in the European Union/Organisation for Economic Cooperation and Development, and by 2040 in other markets.

“We plan to support our customers to progressively decarbonise, by prioritising financing and investment that supports the transition to a net zero global economy, while maintaining economic stability. During this process, we will work with our customers to help them develop their individual decarbonisation plans aligned to the Paris Agreement goals and will expect them to make this part of their public disclosures.”