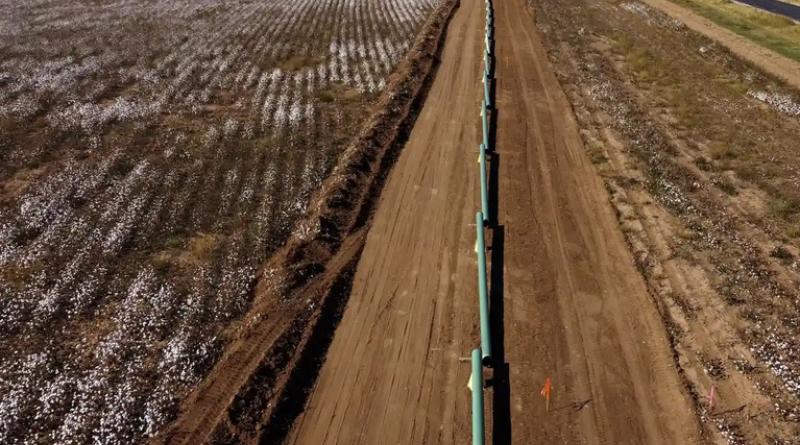 More than 24,000km of new oil pipelines are under development around the world, a distance equivalent to almost twice the Earth’s diameter, a report has revealed. The projects, led by the US, Russia, China and India, are “dramatically at odds with plans to limit global warming to 1.5C or 2C”, the researchers said.

The oil pumped through the pipelines would produce at least 5bn tonnes of CO2 a year if completed, equivalent to the emissions of the US, the world’s second largest polluter. About 40% of the pipelines are already under construction, with the rest in planning. Global carbon emissions must drop by 50% by 2030 to keep on track with internationally agreed targets for limiting global heating.

The developers of the 10,000km of pipelines in construction stand to lose up to $75bn (£70bn) if action on the climate crisis prevents the new pipelines being fully used, according to the analysts at Global Energy Monitor (GEM) who produced the report. 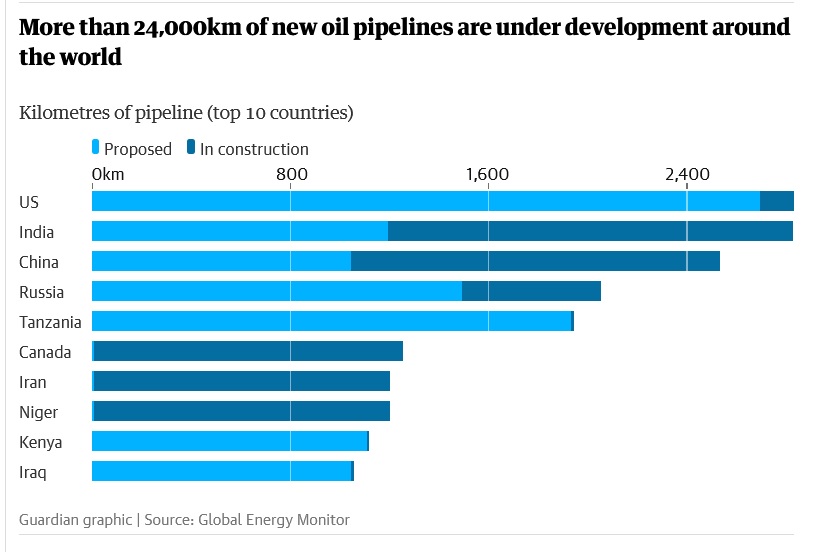 Russia, which is facing oil and gas boycotts from the west over the war in Ukraine and wants to increase exports to India and China, is developing 2,000km of new pipelines.

Regionally, sub-Saharan Africa is leading the world in pipeline development, with 2,000km of oil pipelines already under construction and an additional 4,500km proposed. The projects include the controversial East African crude oil pipeline, which will transport oil drilled from a national park in Uganda to an export terminal on the coast of Tanzania.

“For governments endorsing these new pipelines, the report shows an almost deliberate failure to meet climate goals,” said Baird Langenbrunner at GEM. “Despite climate targets threatening to render fossil fuel infrastructure as stranded assets, the world’s biggest consumers of fossil fuels, led by the US and China, are doubling down on oil pipeline expansion.”

The oil industry enjoyed record profits in the last year, the report said, and “is using this moment of chaos and crisis to push ahead with massive expansions of oil pipeline networks”.

The UN secretary-general, António Guterres, told world leaders gathered in New York on Wednesday: “The fossil fuel industry is killing us, and leaders are out of step with their people, who are crying out for urgent climate action.”

The Guardian revealed in May that the world’s biggest fossil fuel firms are planning scores of “carbon bomb” oil and gas projects that would drive the climate past the temperature targets with catastrophic global impacts. In May 2021, the International Energy Agency said new oil and gas fields were incompatible with the world remaining within relatively safe limits of global heating.

The new report found that the length of pipeline in construction has more than doubled compared with GEM’s assessment in 2019, while the length of proposed pipeline has roughly halved.

The US is the world leader for pipelines in development. “A major push to increase crude oil export capacity out of the Permian basin [in Texas and New Mexico] along the Gulf coast is arguably a make-or-break moment for the industry, which is gradually losing its social licence to build new projects as the impacts of the climate crisis become more severe,” the report said.

India is the leader for pipelines under construction, including the 1,630km Paradip Numaligarh crude pipeline in the north-east of the country, which is expected to come online in late 2024.

Russia is aiming to expand its oil exports along the Northern Sea Route, which is becoming more accessible as global heating melts Arctic sea ice. The proposed Vostok oil pipeline is 1,600km long.

Data on the capacity of the new pipelines was only available for two-thirds of the pipelines in the report, but these would carry 30bn barrels a day for decades if they continued operating to the end of their typical lifetimes. When burned, this oil would produce 4.6bn tonnes of CO2 annually. The GEM analysis did not include projects that had failed to advance its development in the last two years, classifying these separately as shelved.

A Major Oil Pipeline Project Strikes Deep at the Heart of Africa.