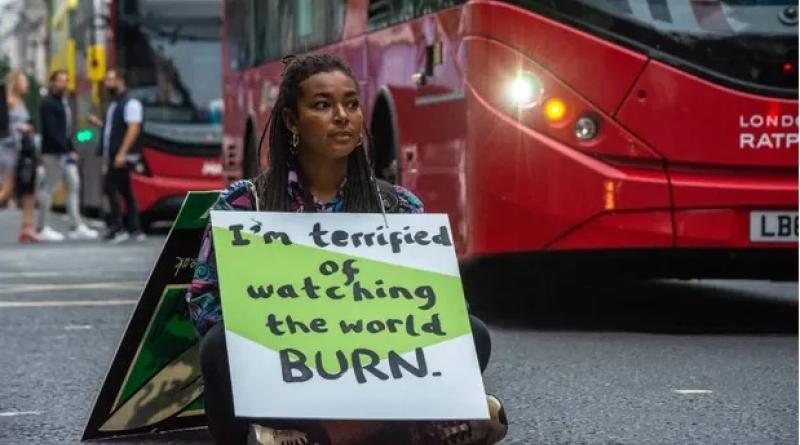 Because the global south is bearing the brunt of climate breakdown, it’s people of colour who are suffering most

It’s 4am, and sparks from the circular saw are flying by my head. I have been given goggles to protect my eyes from the debris and although I’ve been told that I’m in safe hands, I do not feel safe at all. I’m cold from sitting on the road for five hours; my back is stiff, my hands are numb and, to top it all off, humanity is on the edge of extinction. This probably seems an odd way to spend my time to some of you, but this is how climate activists who engage in direct action try to be heard. We have tried everything else. We are exhausted and terrified. So we keep doing it.

Last year I was included in an article about climate activists. In the original article, I was the only person pictured without my placard. My placard said: “Climate inaction = racism.” I want to talk about what this means.

The countries that make up the global north are responsible for 92% of excess global emissions, but it’s the people in the global south who are suffering from the climate crisis right now. Our governments have allowed this to happen, in part, because the crisis has affected black and brown people first. That the safety and livelihoods of these people are not a priority is a reflection of the racist attitudes built into our political and economic systems. And it’s not just in the global south: in the UK, black and brown kids are most likely to live in deprived areas where pollution is at dangerous levels. Children like nine-year-old Ella Kissi-Debrah, who contracted severe asthma and died in 2013 due to shocking levels of air pollution in Lewisham, south-east London, where she lived.

For decades, governments have helped corporations extract oil and other resources from the global south, especially those countries that are heavily in debt. Debt is a tool of neocolonialism which makes developing countries dependent on their former colonisers. Surely we should be the ones in debt to them. The climate crisis and the shape it takes is, therefore, inextricable from colonisation and oppression of black and brown lives. Instead of acting on it, energy is spent on greenwashing to hide what is happening. When your inaction causes suffering predominantly to black and brown people, then your inaction is racism. In the UK, we watch all these tragedies unfold on television or social media and think, “Well, that’s sad, but what can we do?’ It’s happening so far away.” And then we feel grateful that it’s not happening to us.

Even in the climate movement, people talk about things happening in 10 years, 20 years, when food shortages and sea level rises really start to affect our way of life. What about the millions of people who are already suffering from food shortages, locust infestations and drought – all problems that are supercharged by the changing climate? Racism is embedded into the worldview that allows us to consume and pollute without a care for the people who are bearing the brunt of our carbon emissions.

To move away from this we need to think about climate justice. This means protecting the indigenous people whose land we are destroying, and listening to them, centring their voices and acknowledging that they are not part of the system killing us and so need to be involved in a just transition to a sustainable future. We have to listen to those underrepresented in the climate movement, not remove them from the picture – as literally happened to Vanessa Nakate from Uganda.

The next step is seeing how climate justice is intertwined with other struggles against state hostility and negligence. We have to stand up to our government when they deport black and brown citizens and pass laws paving the way for even more UK citizens to be deported. Doing something means giving your hard-earned money to organisations on the frontline such as Survival International, and those helping climate refugees, such as Care4Calais.

Racism sustains the world’s brutally unfair hierarchy of comfort and suffering. Until the UK and other states and citizens in global north treat all human life as equal, we will keep heading towards the darkness. So this is not only about recycling or using less plastic or driving less. If we can’t even talk about racism and the part it has played in climate breakdown, then how do we get better? How do we break down the systems that got us here? How do we heal the damage done to people and the planet? Anti-racism means acting as if the lives of black and brown people on the frontlines of the climate crisis really matter. Inaction is simply not an option.

Toxic waste dumping in the Gulf of Guinea amounts to environmental racism.

Black environmetalists on climate and anti-racism.