‘It’s much easier to stop someone lighting a match than to put out a 1,000-acre fire’ 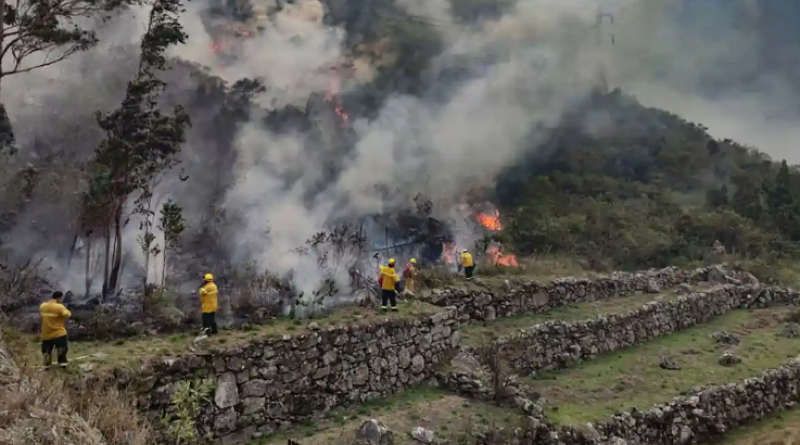 Peru’s Sacred Valley, the breathtaking landscape between Cusco and Machu Picchu, has always had a few conventional fire brigades, but anyone who has ever witnessed a bushfire will know there is little you can do once it takes hold.

While there is a place for carefully managed burning – at the right time of year and in the right weather conditions it can clear land of brush and understory – reckless burns can be catastrophic. “Years of hard work can be undone in a single day,” says Joaquín Randall, who has set up the NGO Valle Sagrado Verde, a reforestation project planting native trees such as huaranhuay, chachacomo, molle and tara in the Sacred Valley. “2020 was a really bad year. One fire burned 20,000 replanted trees in one go. Another killed eight people.”

The Covid pandemic in Peru, which endured one of the world’s strictest lockdowns and suffered the highest per capita death rate in the world, saw hundreds of thousands of people leave the capital, Lima, and return to their Andean home towns to farm.

Given land that hadn’t been used for years, they lit fires to clear it, but many of these planned burns got out of control. “That whole experience made us realise that planting on its own can never be enough,” says Randall. “High Andean valleys are fragile ecosystems that don’t repair quickly. Thousands of years’ worth of topsoil can be washed away if it rains after a fire.”

Randall felt that the time, money and energy spent on putting out fires would be better used preventing them. “It’s much easier to stop someone lighting a match than to put out a 1,000-acre fire,” he says.

In Peru, Randall, who also manages a hotel and restaurant business in Cusco and the Sacred Valley, approached his local municipality and, with the help of Nohely Yamelith Diaz Cusiyupanqui, head of the Office for Risk and Disaster Management for Ollantaytambo, set up 13 brigades staffed by local people. The municipality provided training, transportation and logistical and organisational support. Randall provided 80 safety vests and hard hats, and a financial incentive that would be paid if communities were able to prevent trees from burning.

“It’s completely normal to pay people to put fires out,” says Randall. “So why shouldn’t we pay people to stop them from happening in the first place?”

The prevention programme has focused on education, says Cusiyupanqui. “Using the volunteers as community spokespeople, we explained how controlled burning should be done, and we made sure they supervised all high-risk burns in the area.”

“The farmers understood the message and welcomed this way of approaching fires,” says Carlos Olivera Puma, president of the fire prevention brigade in Rumira, near Machu Picchu. “Thank God there were no fires in our area last year. In previous years, there were many.”

“It is hard work,” adds Yojan Tapia Giraldo, a brigade member from the Tancac community. “But with a lot of support, we have managed to organise ourselves to prevent these fires.”

Cusiyupanqui says the number of fires reported in the areas where the brigades are active dropped from more than 20 in 2021 to only seven a year later. “More importantly, the natural areas that were burned dropped significantly from about 450 hectares (1,100 acres) to barely 30 hectares in 2021,” she adds. There was little to no reduction in the number of fires in surrounding areas not under brigade supervision.

It is too early to gauge the impact this year, as Peru enters peak fire season, but there have been no fires in the area serviced by the brigades. A wildfire that threatened Machu Picchu at the beginning of July was in an area managed by the ministry of culture. It was caused by an out-of-control agricultural burn, and Randall hopes the ministry “might adopt some of our recommendations”.

In the future, Cusiyupanqui dreams of having all 36 communities in Ollantaytambo participate in the fire prevention programme, eventually bringing the number of fires down to zero, a goal supported by Randall.

“Running all 13 fire prevention brigades for one year costs the same as flying a helicopter for two hours,” says Randall. “It’s a no-brainer.”

Global heating to blame for threat of deadly flood in Peru, study finds.

William MacAskill: ‘There are 80 trillion people yet to come. They need us to start protecting them’