It’s time we scrubbed the greenwash off the oil industry 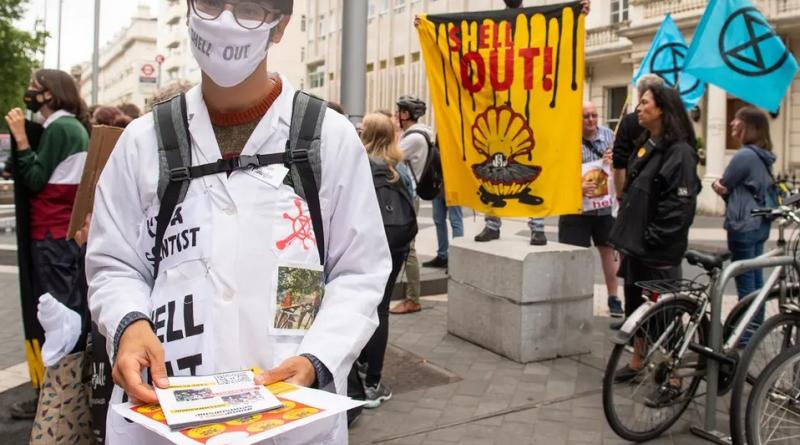 To survive this post-Cambridge Analytica world you must treat everything you encounter as if it might be a #sponsoredpost,

You may have seen last week that Shell abandoned its proposed Cambo oilfield in the North Sea, which is good news in a sort of armbands-on-the-Titanic kind of way. Because what you might not have read is that Shell is also reportedly considering new offshore oil and gas fields in, among other places, Libya, where environmental oversight is a little more relaxed than off the coast of Scotland. There is also (as yet) no local chapter of Extinction Rebellion to kick up a fuss. But you wouldn’t know this if you scrolled down Shell’s Twitter feed, which reads as if it were a renewable energy company.

Most recently, you might have found Shell tweeting about wind turbines in Norway or electric car charging stations in China. And if you scroll a little further back you’ll find tweets about The Great Travel Hack, a Shell-branded, celebrity-hosted online series in which two teams race each other around the world using “lower carbon vehicles”, which seems to be a little like a tobacco company getting two teams of cancer patients to see who can chuff their way through a duty free pack of “low-tar” cigarettes the fastest.

What you won’t see on the Twitter feed is that Shell is in the process of fighting a court ruling in Holland that would force it to cut its emissions faster. According to estimates, its clean energy investments since 2016 add up to $3.2bn (£2.4bn), while it has spent about $84bn on oil and gas exploration and development.

Meanwhile at the Cannes Lions advertising awards, the same ad agencies that run campaigns for the most polluting companies in the world are winning coveted awards for their work with environmental charities such as WWF.

Greenwashing is everywhere. Here in the developed world, demand for sustainable products is almost four times what it was 20 years ago. Around 57 per cent of UK consumers are willing to pay more for environmentally friendly products, increasing to 69 per cent of consumers among the younger generations. As we hurtle towards a sixth mass global extinction, corporations are stepping up to sell us sustainable face cream. Nearly half of all beauty product launches now come with some environmental or ethical claim, although this is of limited reassurance when 40 per cent of green claims made online could be misleading, according to the Competition and Markets Authority (CMA).

The CMA is one part of a loosely crocheted doyley of governmental bodies (including Ofcom and Trading Standards) whose job it is to sieve through this tsunami of bullsh*t. Primary responsibility falls to the Advertising Standards Authority, which is funded by and has its rules written by the industry it regulates and only has the power to ask a company to take an advert down (the ASA has done this only once to Shell in the last 10 years). The advertising agencies that devise these increasingly sophisticated greenwash campaigns, however, are never penalised.

In one industry-facing video, a marketing company explains how they use collectives of “authentic” pop-science influencers to talk up Shell’s “ground-breaking energy ideas” so as to change people’s perceptions of them as a fuddy-duddy oil company. They show how they “got into millennials’ news feeds using NowThis News”, a hugely popular, progressive (some would say “woke”) social media news channel.

Using these trusted information sources, the marketing company disseminated a “native content programme”, which is advertising speak for Shell content that is made to look like an original piece from the publisher, achieving 133 million views. They go on to explain that “social listening data showed Shell [was] mentioned in three times as many conversations regarding innovation and technology compared to their nearest direct competitor BP” and boast that “positive mentions outnumbered negatives by a ratio of three to one”, which actually sounds a bit rubbish, but they reassure that “advocate voices were raised to defy cynics”.

Before they were so rudely interrupted, perhaps those cynics were trying to make the point that between 2010-2018 (when this campaign was active) Shell only spent 1 per cent of its long-term investments on sources of low-carbon energy such as wind and solar. I’m sure the few green-tech ideas Shell did fund were very innovative and all, but far more impressive is this highly sophisticated new approach to marketing that replaces carbon emissions with advertising omissions.

Long ago in more innocent times (the noughties) you at least knew when you were being advertised to. To survive this post-Cambridge Analytica world you must treat everything you encounter as if it might be a #sponsoredpost.

In 2021, you might take the kids to learn about renewables at the Adani Green Energy Gallery in the Science Museum blissfully unaware that Adani is a massive coal mining company and that their sponsorship contract includes a gagging clause preventing the Science Museum from discrediting their reputation. You might be nodding along to Pixie Lott and Jennifer Hudson singing about solar panels in “On Top of the World”, seemingly oblivious to the fact that the catchy pop song was the brainchild of Shell (weirdly none of the lyrics mention Shell’s oil spills or alleged human rights abuses in the Niger Delta). Advertising today is like a game of 3D chess, and it’s entirely plausible that you might wake up one day to discover that your marriage and family are actually a piece of branded content.

The ramifications of misleading advertising can be serious (I spent my teens frantically spraying my pits with Lynx Africa to no avail). When it comes to greenwashing, the implications are even more serious. Climate scientists are releasing reports as apocalyptic as the Book of Exodus but with more graphs. Even with all the promises from Cop26 combined (that’s promises, not actions), we’re still on course for two degrees of warming, which basically means the collapse of life on earth and (even more terrifyingly) the economy. The danger of greenwashing is that it delays real action at exactly the moment it is most urgently needed.

A brilliant campaign called the Creative Climate Disclosure has had more than 170 ad agencies commit to publish what percentage of their turnover comes from high-carbon clients. Most of the big ones are all absent. If you want honesty, don’t ask the ad industry, ask Shell, which freely admits in its 2021 and beyond expenditure report that it plans to spend more on marketing ($3bn) than it does on renewables ($2-3bn). If the ad industry launched a campaign to get the oil industry to divert the money it spends on pretending it’s transitioning from renewables to actual renewables, then that really would be worthy of a Cannes Lions award.

Heydon Prowse is an activist, journalist, satirist, director and comedian. He works with the agency Don’t Panic London

Big oil coined ‘carbon footprints’ to blame us for their greed. Keep them on the hook