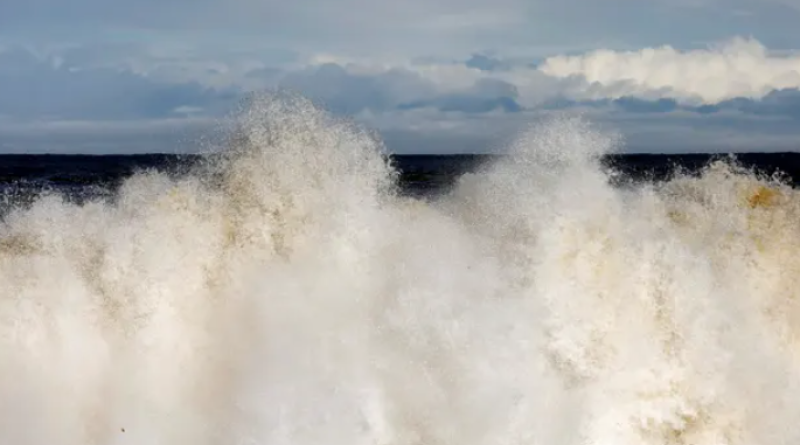 A tsunami could soon hit major cities on or near the Mediterranean Sea including Marseille, Alexandria and Istanbul, with a nearly 100% chance of a wave reaching more than a metre high in the next 30 years, according to Unesco.

The risk of a tsunami in Mediterranean coastal communities is predicted to soar as sea levels rise. While communities in the Pacific and Indian Ocean, where most tsunamis occur, were often aware of the dangers, it was underestimated in other coastal regions, including the Mediterranean, Unesco said.

Now, the UN’s educational, scientific and cultural organisation said five at-risk communities in the Mediterranean area will join 40 other “tsunami-ready” towns and cities in 21 countries by next year. As well as Marseille, Alexandria and Istanbul, they include Cannes and Chipiona, a town on Spain’s Atlantic coast near Cádiz.

The “tsunami-ready” programme is part of Unesco’s broader effort, launched ahead of the UN Oceans conference in Lisbon next week, to ensure all at-risk communities will know what to do in the event of a tsunami by 2030.

“The tsunamis of 2004 and 2011 were a wake-up call,” said Bernardo Aliaga, lead tsunami expert at Unesco. “We have come a long way since 2004. We are safer today. But there are gaps in preparedness and we need to improve; we need to make sure warnings are understood by visitors and communities.”

Since the 2004 Indian Ocean tsunami, Unesco’s Pacific Tsunami Warning Centre, hosted by the US, has responded to 125 tsunami events, averaging seven a year. 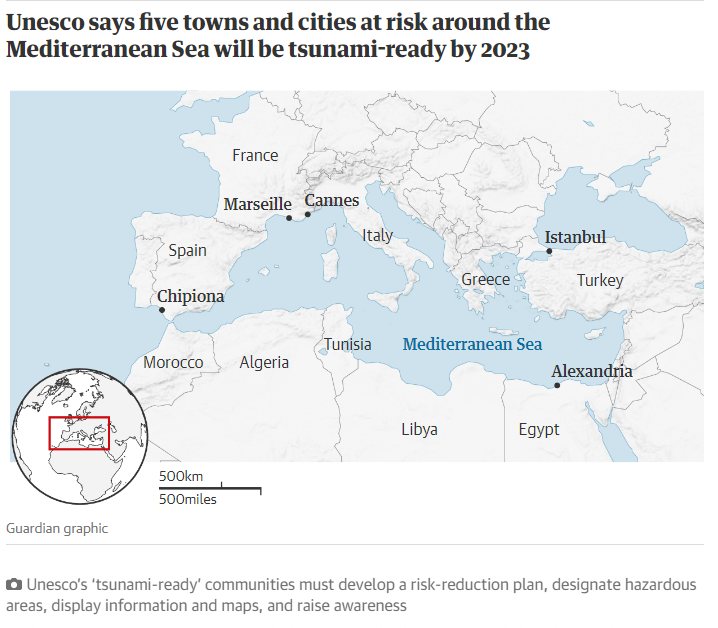 “The upstream part is in good shape” said Aliaga. “Work has been done to establish 12 tsunami-warning centres covering most of the ocean, including the Mediterranean.”

The warning centres include five in the Mediterranean and north-east Atlantic, including Greece, Turkey, Italy, France and Portugal.

“The risk of tsunami is underestimated in most areas, including the Mediterranean,” Aliaga said. “Events are not very frequent and the risk does not translate from one generation to another.

“We need to get the message out,” he added. “In the Mediterranean, there is no question about it: it is not if, it’s when.”

One of the deadliest earthquakes in history hit Portugal on All Saints’ Day 1755, generating a tsunami 6 metres high in Lisbon and Cádiz. Up to 50,000 people died in the earthquake, but many unsuspecting others perished in the ensuing fires and tsunami.

Tsunamis just 1.5-2 metres high can lift cars off the ground, while smaller waves can result in walls of water travelling at 40mph (65km/h).

“The warning is not the full story,” said Aliaga. “The second part is community preparedness – how people behave and react. That has a way to go.”

He cited the case of Tilly Smith, a 10-year-old British girl who led 100 people, including her family, to safety in the 2004 tsunami. She had been told by her geography teacher at school to evacuate immediately on seeing receding water.

Sea-level rises, which increase the impact of tsunamis on coastal communities, are “one more reason to increase the pace of our work”, he said.

“The link is that sea-level rise increases the impact of tsunamis.”

A 2018 study modelling tsunamis in Macau, China, found rising sea levels added to the risk from tsunamis, as they can travel farther inland. The frequency of tsunami-induced flooding rose by 1.2 to 2.4 times for a 45cm increase in sea level and from 1.5 to 4.7 times for a 90cm increase, the study found.

Authorities in Alexandria, Istanbul, Marseille, Cannes and Chipiona are working on “tsunami-ready” preparedness, including evacuation signs and procedures, as well as plans for warning tourists, Aliaga said.

“We want 100% of communities, where there is a proven hazard, to be ready to respond by 2030,” he said. “They will have evacuation maps, they will have carried out exercises and they will already have in place 24-hour alerts.”

Alerts were triggered about 10 minutes after an earthquake hit, he said, and could take the form of anything from loudhailers to WhatsApp messages.

“If it’s a local tsunami, you have 20 minutes maximum before the first wave hits. The second wave is larger and comes 40 minutes after the first one. You still have the possibility of escape.”

Vladimir Ryabinin, executive secretary of Unesco’s Intergovernmental Oceanographic Commission, said: “More than 40 communities in 21 countries are already safer now they have implemented our tsunami-ready programme. If we are to meet this global challenge by 2030, we must scale-up our programme very fast.”