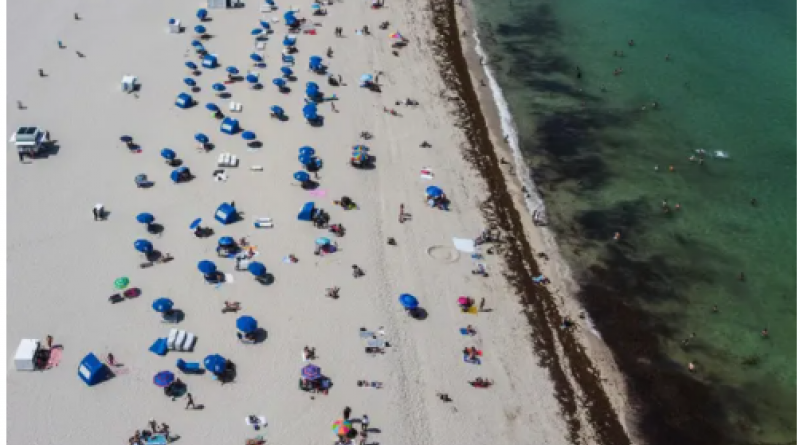 Miami’s new chief heat officer has called for greater federal and state action on the lethal threat posed by rising temperatures after becoming the first official in the US appointed to focus solely on heatwaves.

Jane Gilbert, who has been tasked by Miami-Dade county with coordinating and accelerating efforts to protect lives from extreme heat, said that more focus was needed on what has been called the “silent killer” of the climate crisis.

“In Miami it doesn’t take much of a temperature increase for things to get dangerous,” she said. “I hope that heat is integrated into all sorts of thinking on dealing with climate change and infrastructure. We are seeing a growing awareness of this threat across the US from cities, it’s really bubbling up.”

Heat is the deadliest of all the maladies spurred by the climate crisis, with more than 700 people on average now dying each year from its effects, according to the Centers for Disease Control and Prevention. An independent study last year estimated this death toll is actually much higher, at about 5,600 fatalities a year.

Cities in traditionally cooler climes are at particular risk from the growing threat of heatwaves as residents there often lack air conditioning and other adaptations to deal with the onset of hot temperatures. In many US cities, low-income neighborhoods of color are regularly far hotter than nearby, leafier areas where white residents are in the majority.

Gilbert said that even places traditionally used to heat, such as Miami, will need to do more to provide cool-down centers for vulnerable people, generate more shade via increased tree cover and educate people of the dangers posed by sweltering temperatures.

Miami-Dade currently experiences about 40 days a year that feel like 100F (37C) but it’s estimated this total will rocket to 134 such days a year by mid-century if planet-heating emissions are not slashed.

Democrats in Congress have pushed for a law that would force the US Department of Labor to draw up new national standards to protect people who work outside in the heat. A bill demanding this has been named after Asunción Valdivia, a farm worker in California who died in 2004 after picking grapes for 10 hours without a break in 105F (40C) temperatures. He was eventually driven home but started foaming at the mouth and died.

According to labor department figures, more than 800 US workers have been killed and 70,000 have been seriously injured by heat stress since the 1990s but there is no national heat mandate and only a handful of states, such as California, where workers must be supplied with filtered drinking water and shaded areas once temperatures hit 80F (26C), have standards in place to protect those working outside.

In May, Governor Ron DeSantis, a Republican, signed a new bill to help Florida deal with sea level rise but proposals to ensure workers get adequate shade, regular breaks and plenty of drinking water have languished. “At the state level we are moving from very little action to some action related to sea level rise, which we are thrilled about, but we need the state to start looking at increasing heat,” said Gilbert.

“There could be investment in green infrastructure, rehabbing substandard housing and action for outdoor workers. There’s a lot more to do.”

Gilbert will jointly lead a new heat taskforce that will look at crafting a series of measures, such as an outdoor worker heat standard and a new alert system for when temperatures soar. Cheryl Holder, a Florida doctor who will co-lead the taskforce, said action was required to deal with the growing number of heat-related conditions she is now dealing with.

“The number of dangerous days are increasing and we are seeing more complaints over the heat, more skin problems, more instances of diabetes not being as controlled, more injuries when workers get hot and dizzy on the job,” she said. “It will be hard to get change but this is urgent. We really need to address this now.”

Holder said she had raised the prospect of a barely livable Florida with lawmakers, suggesting to aides of Marco Rubio, the Republican senator, that even Disney World will become unattractive to visitors if temperatures regularly breach 100F.

“Florida sells itself on tourism, the outdoor life,” she said. “If it becomes unbearably hot, who will want to be outside? It’s crucial Florida gets serious about heat and how to manage it.”

Another dangerous fire season is looming in the Western U.S., and the drought-stricken region is headed for a water crisis