Mining in the Pacific: a blessing and a curse 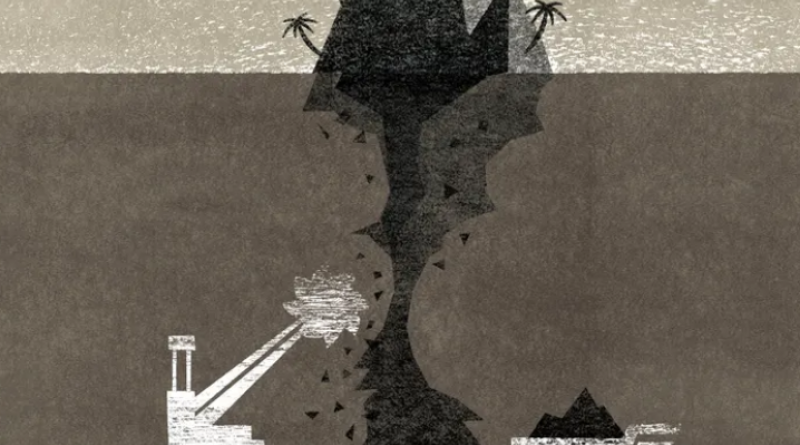 Millions of tonnes of fuel, oil and minerals are extracted from the region – but some communities have little to show for it but devastation

Mining is big business in the Pacific.

Guardian analysis of trade data can reveal that each year nearly 11m tonnes of fuel and oil (the equivalent of 1100 Eiffel towers) are extracted from the region, 2m tonnes of copper, nickel, manganese and aluminium are mined, and gold worth US$2.6bn is quarried.

But despite the minerals and wealth pulled from the Pacific’s mountains, valleys, oceans and rivers, communities often have little to show for it.

In Solomon Islands, a bauxite mine on Rennell Island has scarred a once-pristine landscape and been the cause of environmental disasters – spills of oil and bauxite into the island’s fishing grounds – while paying zero royalties to the government.

Nauru once had one of the highest per capita incomes in the world because of a booming phosphate mining industry in the 1970s and 80s. But the mismanagement of hundreds of millions in royalties caused the near-collapse of the country’s economy and fuelled a series of financial crises. Nearly 80% of the island’s small landmass is unliveable, having been stripmined by foreign multinationals.

On Kiribati’s Banaba, mining has left the atoll with no reliable supply of drinking water. And, in New Caledonia, angst over nickel mining has undermined political stability.

But nowhere is the impact of mining – its booms and busts, potentials and pitfalls – felt more acutely than across Papua New Guinea’s broad archipelago.

On the island of Bougainville, which for now remains part of PNG but in 2019 voted overwhelmingly for independence, sits Panguna – the gold and copper mine which once brought billions to its foreign owners.

The giant hulk of Panguna, all but silent now for 32 years, is representative of the wicked dilemma faced by PNG in its relationship with mining: its resources are both blessing and curse.

On one hand, resource extraction has poured millions into government coffers, funding development and government services, and enabling a fragile post-independence economy to grow.

Panguna bankrolled PNG in its early post-independence years. Over 17 years it made more than US$2bn for the mine’s former owner and operator, Rio Tinto, which pulled 550,000 tonnes of copper concentrate and 450,000 ounces of gold from the mine in its last year alone. At one point, Panguna accounted for 45% of all of PNG’s exports and 12% of its GDP.

By weight, oil, metals and minerals represent 61% of the country’s total exports. But the majority of the wealth generated by the vast natural resources does not flow to the people of the country but runs offshore.

In monetary terms, oil and mining accounted for approximately 90% of PNG exports in 2018 but just 10% of government revenues.

On top of this, many mines, such as the Lihir goldmine exploiting tax exemptions and accounting practices like accelerated depreciation, have paid almost zero corporate tax since 2013.

In the case of Panguna, the mine brought but a sliver of the wealth and development that was promised to those whose land it was on – less than 1% of profits. It left behind a legacy of division, violence and environmental degradation.

Rio Tinto abandoned Panguna in 1989. It has never returned, saying it is unsafe for its staff, despite pleas from landowners to repair the vast and ongoing environmental damage.

The director of PNG’s Institute of National Affairs, Paul Barker, says it is a constant challenge for resource-rich developing nations to balance the economic benefit of extraction against the wellbeing of their peoples.

“We all use the products from extractive industries, but it is society’s responsibility – including government and the mining industry’s – to manage that process to minimise the negative impact, to lay down and apply minimum standards… and to mark some places as off-limits for extractive industries,” he says

Barker says PNG “has made many mistakes along the way”, in not keeping the profits and benefits of mining within the country, to be used for the advantage of the PNG people, and allowing too much of the wealth generated by its natural resources to go offshore.

“It learned a lot of lessons from mistakes, like the need for effective landowner consultation … but then forgot those lessons in some cases, and pushed through some projects through arrangements that lacked transparency, creating avenues for future discontent.”

At the other end of PNG, the story is starkly familiar. The polluting Ok Tedi mine in Western province has been kept open for two decades beyond its original lifespan, even after BHP walked away from the site, leaving it in the hands of the PNG government.

The mine discharges millions of tonnes of poisonous waste down the Fly River each year, killing fish and trees, and poisoning croplands and drinking water.

Michael Eneau, ward member from the Kiwai local level government area – on the mouth of the Fly, downstream from Ok Tedi – tells the Guardian “the damage to the environment and people’s livelihoods continues today”.

“Over time, the waste from the mine being deposited into the river has seen a build-up of sediments and this has caused over-flooding – causing villages to be completely submerged,” he says. “Our water wells have also been affected and we cannot access clean drinking water.”

Impacted communities along the river receive a payment of K100 – US$27.70 – per person, per year as part of the government-brokered community mine continuation agreement. Eneau argues that this pales in comparison with the damage to lives and livelihoods.

Ok Tedi Mining Limited says that since the mine’s opening in 1984, it has contributed more than K10bn (US$2.77bn) to “assist the development of economically sustainable local and regional communities in the province through employment, taxes and royalties and capacity building and economic and social development programs”. Mine profits have funded roads, schools and a hospital.

It says it has spent more than US$1.9bn “to reduce the long-term impact of its mining operations on the river system”.

“Over the last six years, the CMCA communities have received over K340m in cash compensation from Ok Tedi Mining Ltd and a further K50m will be paid out to the communities this year.”

Other mines have run into similar problems, balancing foreign and domestic economic interests, as well as the rights of those who’ve lived on the land for generations.

In 2020 the PNG government cancelled the mining lease of a part-Chinese owned Porgera gold mine in Enga, claiming that the country was not getting its fair share of its profits.

But still more mines are proposed: in Lae, PNG’s first coalmine and coal-fired power plant is proposed, while in Sepik province, at the head of the Sepik and Frieda rivers, plans for the country’s largest copper and gold mine have been advanced, over the vociferous protests of village councils and the concerns of the UN special rapporteur, who says the planned mine carries a risk of “catastrophic ... loss of life and environmental destruction [and] appears to disregard the human rights of those affected”.

Where mining meets rainforest: the battle for Tasmania’s Tarkine.