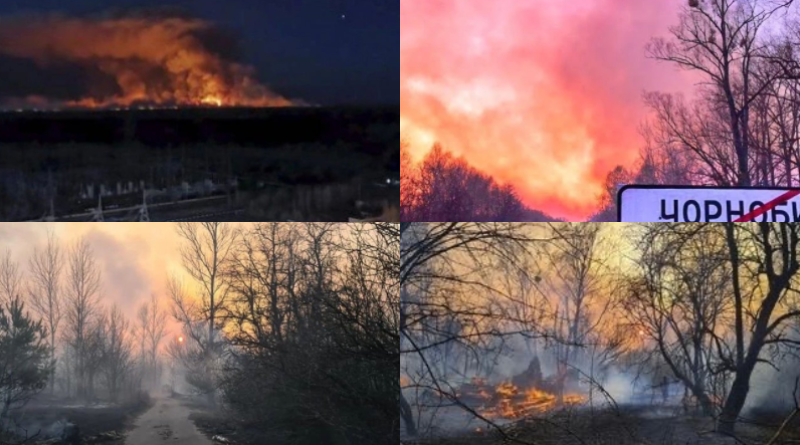 More than 10,000 hectares of forest are burning in the Chernobyl exclusion zone, a Ukrainian official has warned.

Lyudmila Denisova, commissioner of the Verkhovna Rada of Ukraine for human rights said the fires have led to an increased level of radioactive air pollution with a threat to neighbouring European countries.

She attributed the fires to Russian combat in the region, 31 blazes have been recorded, as she called on the International Atomic Energy Agency (IAEA) to send firefighters and equipment to help tackle them.

“Control and suppression of fires is impossible due to the capture of the exclusion zone by Russian troops. As a result of combustion, radionuclides are released into the atmosphere, which are transported by wind over long distances.

This threatens radiation to Ukraine, Belarus and European countries,” Ms Denisova said in a Facebook post on Sunday.

She warned that a failure to intervene could result in “irreparable consequences not only for Ukraine but also for the whole world.”

“Catastrophic consequences can be prevented only by immediate de-occupation of the territory by Russian troops. Therefore, I call on international human rights organizations to take all possible measures to increase pressure on the Russian Federation to end military aggression against Ukraine and de-occupy high-risk areas,” Ms Denisova said.

The abandoned zone around the Chernobyl plant is still considered highly risky because of the radiation from the 1986 nuclear disaster.

Possible dangers still linger in the plant area itself as radioactive components from the time of the disaster still exist.

Also, the soil still contains radiation and particles are still present in Chernobyl’s atmosphere from the time of the accident. This can spread to further regions via smoke when wildfires occur.

Local physicians and health experts had warned that the threat from the radiation in the area around Chernobyl is still very real and visible in children born with weak immune systems and heart arrhythmias.

Chernobyl was seized by Russian troops four weeks ago and since then there has been a shortage of food and fuel supply. According to reports, the staff of the besieged power plant are being made to work at gunpoint by Russian soldiers.

Over a week ago, the IAEA was told that the Russian military detonated unexploded munitions left at Europe’s largest nuclear plant raising fears of a radiation leak.

However, IAEA confirmed that while the training facility was damaged on 4 March, IAEA director-general Raphael Mariano Grossi said that “all the safety systems of the six reactors at the plant were not affected at all”.

The IAEA, which reports to the United Nations, warned that the site’s 211 technical personnel and guards were working “under enormous stress without the necessary rest.”

Slavutych, a town with a population of 20,000 just outside the exclusion zone was attacked by Russian forces crossing the Belarus border on the first day of Vladimir Putin’s invasion of Ukraine. The town lies on a direct route from Belarus down to Kyiv forming a key route for Russian forces to invade from the north.