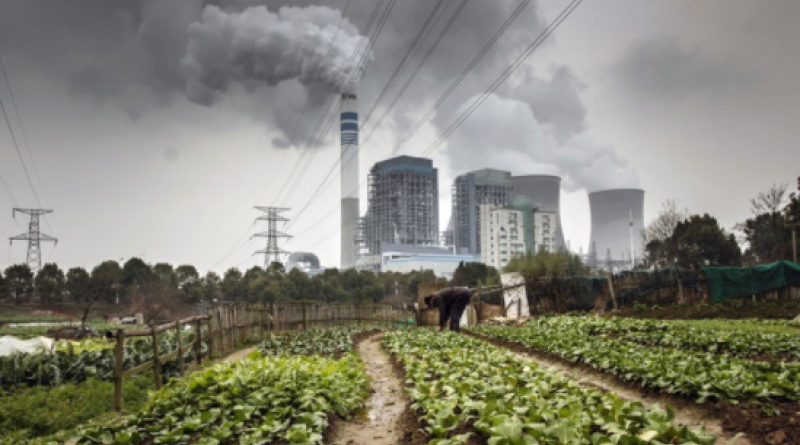 Modelling suggests that many planned coal, oil and gas extraction projects will not be viable if the world hopes to achieve climate targets.

Nearly 90% of economically viable global coal reserves must be left in the ground to have even a 50% chance of hitting internationally agreed climate-change goals, according to an updated model of limits to fossil-fuel extraction, published today in Nature1.

For a 50% chance of remaining below 1.5 °C degrees of global warming — the more aspirational goal of the 2015 Paris agreement — the world must not emit more than 580 gigatonnes of carbon dioxide before 2100, report the authors. Under this scenario, researchers led by environmental and energy economist Dan Welsby at University College London calculate, 89% of coal reserves, 58% of oil reserves and 59% of gas reserves must remain unextracted (see ‘Resources off limits’).

The authors stress that although the scenario already looks “bleak” for the global fossil-fuel industry, even tighter limits on extraction will be needed to improve the chances of constraining warming to 1.5 °C above pre-industrial levels.

The research “makes the fundamental point that the majority of known economic reserves will not be able to be used”, says Frank Jotzo, an environment and climate-change economist at the Australian National University in Canberra. 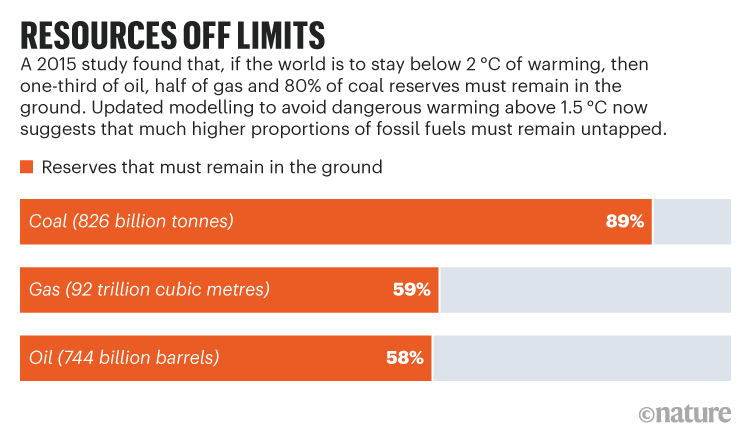 Never see the light of day

The study builds on a 2015 model2 that examined how much fossil fuel must remain unused to limit global average temperature increases to no more than 2 °C compared with pre-industrial times. Updating the model was important because the entire debate has now moved beyond 2 °C being acceptable, says Welsby. “Actually, 2 °C is incredibly significant warming.”

The model captures key primary energy sources, such as fossil fuels, biomass, nuclear and renewables. It takes into account demand, economic factors, the geographical distribution of resources and emissions, and examines how these change over time. It also incorporates negative-emissions technologies, such as carbon dioxide removal.

However, the study reveals significant regional differences in limits on fossil-fuel extraction, based on the carbon intensity and cost of exploiting different resources.

For example, the modelling suggests that 84% of Canada’s oil sands must remain untapped, as well as all undeveloped oil and gas resources in the Arctic. Australia must leave 95% of its coal reserves in the ground, and both Russia and the United States will need to walk away from 97% of theirs.

Under the new model, only the mostly cheaply exploited fossil-fuel reserves will be viable, says Michael Jakob, an economist at the Mercator Research Institute on Global Commons and Climate Change in Berlin. “Others, like the Canadian tar sands, of course would be completely uncompetitive because you would never go in this area of expensive oil production.”

The model also assumes substantial use of carbon dioxide removal and carbon capture and storage, because if they aren’t included or are included at a smaller scale, “that target is unfeasible”, Welsby says.

This mirrors the approach taken in last month’s Intergovernmental Panel on Climate Change (IPCC) report, which allowed a 40% increase in greenhouse-gas emissions while remaining below 1.5 °C by including negative-emissions technologies, says Pep Canadell, chief research scientist at the CSIRO Climate Science Centre in Canberra, who has contributed to IPCC assessment reports.

Canadell says the inclusion of carbon dioxide removal acknowledges the likely scenario that “we blow out our carbon budget”, but then remove enough carbon dioxide from the atmosphere to bring the temperature back down to, or even below, 1.5 °C degree above pre-industrial levels.

However, this strategy is risky, says Nebojsa Nakicenovic, energy economist and former chief executive of the International Institute for Applied Systems Analysis in Vienna. Overshooting emissions targets and then removing the carbon from the atmosphere “means we are postponing the problem to the second half of this century”, and carbon dioxide removal technologies have a long way to go before they are scalable, he says.

It is clear, based on evidence such as the results of the new modelling, that achieving the deep fossil-fuel emissions reductions needed to keep warming below 1.5 °C will be a “Herculean task” and we must start immediately, Nakicenovic says. “It’s not enough to have promises for 2050.”

Canadell says that it is an encouraging sign that coal use has been in free fall in the United States and Europe for more than a decade, but he has concerns about growing investment in natural gas, which is likely to leave some countries and investors heavily out of pocket if the limits of the model are adhered to. “You’re going to invest in a sector where there is no growth to come,” he says.

DNV: Fossil fuels to still make up half of energy mix by 2050

How much of the world’s oil needs to stay in the ground?