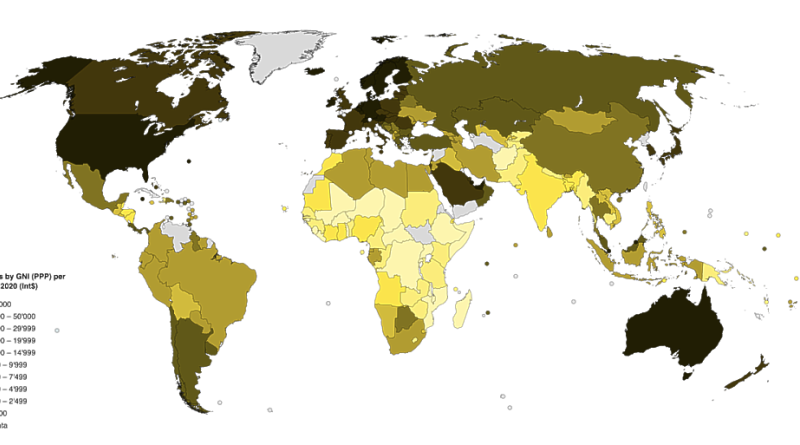 Is the $100bn a year promised by rich nations to developing ones to assist their climate mitigation plans enough? Almost certainly not, explains Mahlet Eyassu Melkie at Rocky Mountain Institute. That number was pretty much plucked out of the air for political reasons. To come to an evidence-based number, a great deal of assessment, analysis and finally agreement is needed internationally. That process is called the New Collective Quantified Goal (NCQG), stipulated by the 2015 Paris Agreement. Melkie asks the important questions. What counts as climate finance? How will the correct funding total be determined? What will be included – mitigation, adaptation, loss and damage, poverty alleviation? Who pays? Loans or grants? One analysis puts the total at $5.9tn needed by 2030, probably more.

A key accompanying decision to the 2015 Paris Agreement stipulates setting a new collective quantified goal (NCQG) for climate finance prior to 2025. This new goal is to be built on the foundation of the US$100 billion per year by 2020 commitment and must consider the needs and priorities of developing countries.

$100bn/year: a political, not evidence-based, goal

The original goal of US$100 billion was a political move to rebuild trust among Parties; it was not scientifically based nor derived from the needs of developing countries. Parties and observers continue to argue about achieving the US$100 billion target and have learned many lessons from climate finance provision and mobilisation efforts over the past decade. One can only expect the deliberations on the NCQG to become increasingly contentious.

Delegates at COP26 in Glasgow launched an ad hoc work program, which will run until COP29 in 2024, to initiate the deliberations of the NCQG. The first Technical Expert Dialogue (TED) in March 2022 raised a broad range of issues that need to be addressed but failed to establish a clear structure on how to do that. The first year of this process is critical to getting the work program on the right track, ensuring its inclusiveness and transparency, and identifying all fundamental questions and issues to be debated and resolved along the process.

The Informing the NCQG project seeks to provide science-, evidence-, and equity-based input to inform key conversations through an upcoming technical paper series. Funded by the Government of Germany, the project — coordinated by RMI — partners with Climate Analytics, Climate Policy Initiative, Global Center on Adaptation, Climate Finance Group for Latin America and the Caribbean, Open Society Foundation, Oxfam, and South-South-North. Ultimately, we hope to ensure that the NCQG effectively supports building resilience and promotes the economic transformation needed in the Global South to meet the Paris Agreement and Sustainable Development Goals. This article highlights some of the key questions that should be considered throughout the TEDs and other deliberations of the NCQG.

What counts as climate finance?

The absence of a commonly agreed upon definition of climate finance remains a major concern. Without a precise definition, Parties use the term in varying ways, resulting in frustration and distrust, particularly when it comes to what finance to count toward the NCQG. The Standing Committee on Finance’s ongoing work on definitions should provide valuable input to the NCQG process by COP27. Agreed upon and understood definitions would facilitate the accurate tracking of climate finance flows, separating them from the accounting of development assistance.

How will the NCQG support the achievement of the Paris Agreement?

Parties must formalise the relationship between the new goal and existing financial commitments as stipulated in the Convention, the Paris Agreement, and previous COP decisions. What will the linkages be between, for example, the NCQG and Article 2.1c of the Paris Agreement, which aims to make finance flows consistent with a pathway toward low greenhouse gas emissions and climate-resilient development? Or Article 9 (Finance), the Global Stocktake (Article 14), and the Global Goal on Adaptation? What about the NCQG’s relationship to relevant provisions under Article 4 of the Convention given that Article 9.1 of the Paris Agreement establishes the financial obligations by developed countries under the Paris Agreement in continuation of existing obligations (i.e., those under the UNFCCC)? What is the NCQG’s relationship to elements of Article 6 of the Paris Agreement? How will the NCQG support the implementation of the nationally determined contributions (NDCs) and bring transformations that contribute to limiting global temperature rise to 1.5°C?

Clarifying these linkages will facilitate decisions on a process to track progress toward the new goal, not least because the articles mentioned above contain qualifying criteria for climate finance and would influence what to count and how to count it. One distinct option would be connecting the NCQG to the enhanced transparency framework under Article 13 of the Paris Agreement that specifies how Parties must report on progress in their mitigation and adaptation measures and support provided or received.

How will the new quantified figure be determined?

Per the decision taken in 2015, setting the NCQG must consider the needs and priorities of developing countries that have called for it to be needs- and science-based, as opposed to a purely political target. Developing countries also wish to ensure that they receive assistance for achieving the Paris Agreement’s goals as stated in Article 2.

To agree to an output-based goal, Parties would be required to undertake considerable analysis of reports, studies, and data. One such report might be the first UNFCCC report on the determination of needs of developing country Parties related to implementing the Convention and the Paris Agreement. It found that as of May 2021, NDCs from 153 parties had identified climate finance needs — ranging from financial and capacity building to technology development and transfer — of US$5.8–US$5.9 trillion through 2030.

However, this may be an underestimation, as not all countries have been able to accurately determine the cost of their NDCs. Further, a United Nations Environment Programme analysis predicted that developing countries’ adaptation needs alone are in the upper limit of estimates made in the 2016 Adaptation Gap Report — US$140–US$300 billion by 2030 and US$280–US$500 billion by 2050.

What will be the different components of the new goal?

Developing countries keep advocating for increasing funding for adaptation to achieve a balance of climate finance between mitigation and adaptation. While climate funds, including the Green Climate Fund, have started to implement more balanced allocation strategies, climate finance remains disproportionately allocated to mitigation efforts as shown by successive OECD reports.

Although the latest OECD report puts the tally at 21% of climate finance going to adaptation in 2019, CPI’s Global Landscape on Climate Finance report shows that in 2019/2020 only 7% of climate finance was allocated for adaptation, in contrast to 90% for mitigation and 2% for dual impact projects. Many argue this dichotomy is no longer sufficient to appreciate the quality of climate finance and that Parties need to get more granular and targeted with access mechanisms for local actors and communities to increase effectiveness.

One of the most contentious components of the NCQG will be over the inclusion of support for loss and damage. There has already been tremendous loss of life and damage to property due to more frequent and severe extreme weather. These climate impacts have huge financial implications for developing countries’ economies while commitments to support addressing, averting, and minimising loss and damage remain vague.

Although loss and damage is recognised in Article 8 of the Paris Agreement, little has been operationalised to date. No financial target has been set for supporting measures for addressing or recovering from loss and damage, nor has a vehicle to facilitate such support been established. The NCQG process provides an opportunity to follow through on these issues by including loss and damage alongside mitigation and adaptation in the NCQG.

Additionally, converging sustainable development priorities, including eradication of poverty and climate commitments, will take central stage at COP27. Ensuring the creation of decent work, high-quality jobs, and supporting a just transition in developing countries will be important elements to be considered by Parties when designing the NCQG.

Therefore, a critical discussion for setting the NCQG is around determining its structure including how or whether global sub-targets should be set and aligning the new goal with countries’ needs and priorities. Key questions include: is setting different goals for financing various priority areas such as mitigation, adaptation, loss and damage, and the just transition the next logical step to the discussion on the quality of finance? And within these priority areas, should the NCQG recognise sectoral targets, such as energy and nature-based solutions? What about the potential for a limited set of targeted qualitative sub-goals related to facilitating access to climate finance through removing access barriers and other obstacles related to mobilising investment?

An additional issue to consider would be how the new goal differentiates between two specific dimensions of the NCQG: (1) Its role in mobilising investments needed in developing countries and (2) the provision of support needed to directly pay for interventions, where (return-seeking) investments do not offer an economic (or socially just) alternative.

What/who contributes to the NCQG?

Parties must also consider the sources of finance toward the new goal. They will have to decide which finance sources should count toward the NCQG: public, private, and/or innovative. How can the NCQG ensure that each of such sources remains consistent with existing provisions for climate finance such as PA Article 9 or UNFCCC Article 4.3 and 4.4? Will these sources of finance that show progression be new and additional?

The biggest issue will likely be the question of contributors, the range of which has been somewhat broadened by the Paris Agreement language. The Paris Agreement encourages voluntary contribution from other Parties, in addition to developed countries that are bound by the obligation in PA Article 9.1. and had committed to the US$100 billion goal. Will that contribution be counted toward the NCQG and what would it look like in the context of global climate justice and equity?

How can the financing be streamlined and Just?

Accessing climate finance remains a challenge for many developing countries. How can the NCQG ensure that access is fair, streamlined, and simplified particularly for the most vulnerable and capacity-constrained countries? It will be important to consider whether there should be geographical allocation and/or prioritisation of the most vulnerable countries.

An important factor in these considerations is the financial instruments used for mitigation and adaptation. According to the OECD, 74% of public climate finance is comprised of loans, while 20% is grant funding. Looking specifically at financial instruments for adaptation, according to Oxfam’s 2020 Climate Finance Shadow report, grants-based financing to adaptation amounted to only 33%. In facilitating access, can the NCQG be defined from a climate justice perspective to prevent increasing the already high debt burden developing countries face?

Should we keep doing this?

When the US$100 billion goal was set, there was no clear indication as to whether it would be revised, how it would be tracked, how its impact would be assessed, or if it would be appraised based on the needs of developing nations. Because of this ambiguity, many Parties advocate considering the NCQG’s timeframe and periodic revisions to reflect changing needs in response to increasing climate impacts and ramping ambition.

This would also ensure that the NCQG could continuously take into account the needs and priorities as stipulated in the 2015 decision. Guidance for re-evaluating the NCQG could include different benchmarks and milestones, including adjusting the NCQG every five to ten years to keep up with the NDCs and long-term low-emissions development strategies or aligning it with other processes such as the Global Stocktake.

The issues identified above are of critical importance to the June 13-14 SB56 session, where the second Technical Expert Dialogue (TED2) took place. Its outcome should draw a roadmap toward the new goal, including milestones, areas for elaboration, and needed technical inputs. Parties should leave TED2 with a clear work plan through 2024 and, ideally, the co-facilitators will prepare a draft work plan for Parties’ consideration. Parties should also identify those specific issues that may need to be further elaborated and reflected on in the submissions for August.

This article is published with permission. Copyright 2022, Rocky Mountain Institute