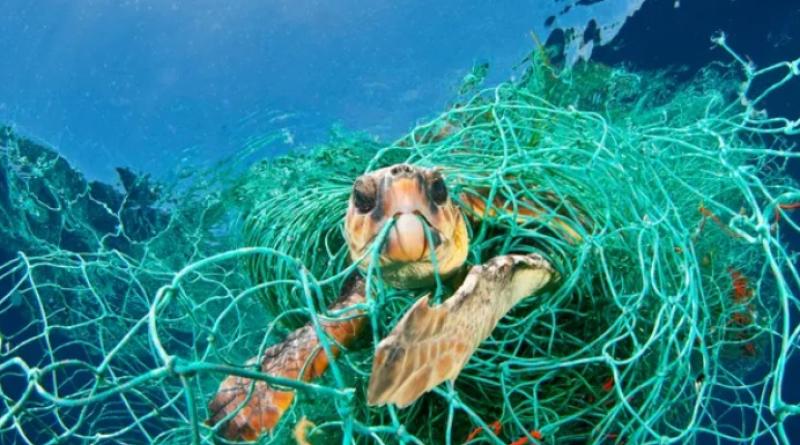 Lost nets, lines and hooks trap wildlife for years as they float in the ocean, sink to the bottom or are washed ashore

Enough commercial fishing line is left in the ocean each year to stretch to the moon and back, according to the most comprehensive study ever completed of lost fishing equipment.

The staggering amounts of lost gear, which includes 25 million pots and traps and 14 billion hooks, was likely having deadly consequences for marine life, one of the study’s authors said.

Enough nets were lost or discarded each year to cover Scotland. If all types of lost line was tied together, it would be able to stretch round the Earth 18 times.

“This is super confronting,” said Dr Denise Hardesty, of the Australian government’s CSIRO science agency, and one of the study’s authors.

“This is having an unimaginable toll of unknown deaths that could result in population level effects for marine wildlife.”

Published in the journal Science Advances, researchers from CSIRO and the University of Tasmania used standardised interviews with 451 commercial fishers in seven countries to ask what was being lost.

Researchers matched those interviews with data on the amount of commercial fishing globally to estimate what was lost. Annual losses included:

Fishers in the United States, Morocco, Indonesia, Belize, Peru, Iceland and New Zealand were interviewed. The countries were chosen because they had a fishing industry using most fishing methods.

A previous estimate put the percentage of gear lost at a higher level, but that research relied on a range of studies, rather than a standardised estimation based on interviews.

Hardesty said fishers often lost nets due to bad weather where equipment wasn’t properly secured or floated away, or gear became entangled with equipment from other vessels competing for the same fish.

But she said because nets were designed to catch and kill animals, lost gear would continue to entrap wildlife for years as it either floated in the ocean, sank to the bottom or washed ashore.

“You are then also catching a whole bunch of fish but then not eating them. That becomes a food security problem because that’s protein that’s not feeding people around the world.”

Kelsey Richardson, a lead author from the University of Tasmania, said the detailed estimates should help fisheries managers, the commercial fishing sector, and conservationists to better target solutions.

The nets were adding to the global problem of marine plastic pollution, she said

Hardesty said there were solutions, such as local governments introducing buy-backs of older fishing gear which tended to get lost more often than new equipment. Tags or labels could be attached to gear, and free facilities could be introduced at harbours to allow fishers to discard unusable nets safely.

Richard Leck, head of oceans at WWF Australia, said: “These figures are breathtaking. This gives us a sense of the horrendous scale of the problem and the urgent need to tackle it.

“Ghost nets – as they’re known – are a particularly lethal form of plastic pollution for all the marine life we care about. Once these nets are lost from a fishing vessel, they don’t stop fishing.”

Leck said a global plastic pollution treaty currently being negotiated through the United Nations needed to address the problem of ghost nets “at a global level to make sure countries are accountable” through transparent reporting and labelling of fishing gear.

“This affects all countries – not just the places where nets are lost. This gear can migrate around oceans and continue to catch fish and entangle threatened species.”

MPs say ‘out of sight, out of mind’ attitude won’t work for ocean pollution

Offshore fish farms: a new wave of food production … or the ‘wild west’ of ocean pollution?