Nigeria battling floods ‘beyond control’ as warning given of dams overflowing 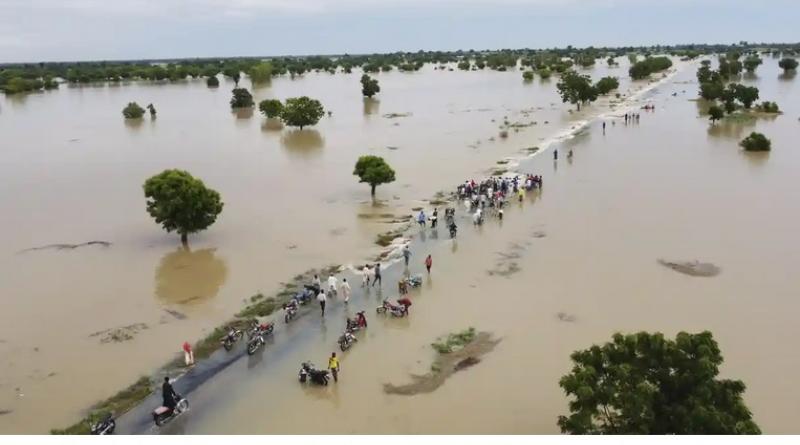 Nigeria is battling its worst floods in a decade with more than 300 people killed in 2022 including at least 20 this week, as authorities said the situation is “beyond our control.”

The floods in 27 of Nigeria’s 36 states and capital city have affected half a million people, including 100,000 displaced and more than 500 injured, Nigeria’s National Emergency Management Agency said.

The disaster has also destroyed thousands of hectares of farmland, worsening fears of a disruption of food supply in Africa’s most populous country.

Since 2012, “this [the flood-related deaths] is the highest we ever had,” said Manzo Ezekiel, a spokesperson for the disaster management agency.

Nigeria sees flooding every year, often as a result of non-implementation of environmental guidelines and inadequate infrastructure. Authorities are blaming the floods this year on water overflowing from local rivers, unusual rainfalls and the release of excess water from Lagdo dam in neighbouring Cameroon’s northern region.

The Nigeria Hydrological Services Agency predicted more floods in 2022 than last year due to “excessive rainfalls and contributions from external flows” such as the dam in Cameroon.

On Monday, Nigeria’s disaster management agency alerted more than a dozen states of “serious consequences” in the coming weeks as two of the country’s dams started to overflow.

“I want to advise all the governments of the frontline states to move away communities at risk of inundation, identify safe higher grounds for evacuation of persons and prepare adequate stockpiles of food and non-food items,” said the head of Nigeria’s National Emergency Management Agency, Mustapha Habib Ahmed.

In the north-west Jigawa state, floods killed more than 20 people in the last week, Yusuf Sani Babura, head of the Jigawa State Emergency Management Agency, told the AP. The state has recorded 91 deaths from flooding this year – more than any state in the country.

“We are facing devastating floods beyond our control,” said Babura. “We have tried our best and we couldn’t stop it.”

The floods have also destroyed crops, mostly in Nigeria’s northern region, which produces much of what the country eats, raising concerns that they could further affect food supplies already disrupted by armed conflict in the country’s north-west and central regions.

n the Benue state, Aondongu Kwagh-bee said he visited his rice farm recently and discovered that a heavy downpour had “wiped away everything.”

“Right now, there is nothing there. Just sand filled up and the rice has been washed away,” the 30-year-old said.

Akintunde Babatunde, an Abuja-based climate analyst, said the main cause of Nigeria’s annual flooding problem was the poor infrastructure of roads, drainage and waste disposal.

“Unusual rainfall is evidence of the changing climate,” he said.