Ocean Battery stores renewable energy at the bottom of the sea 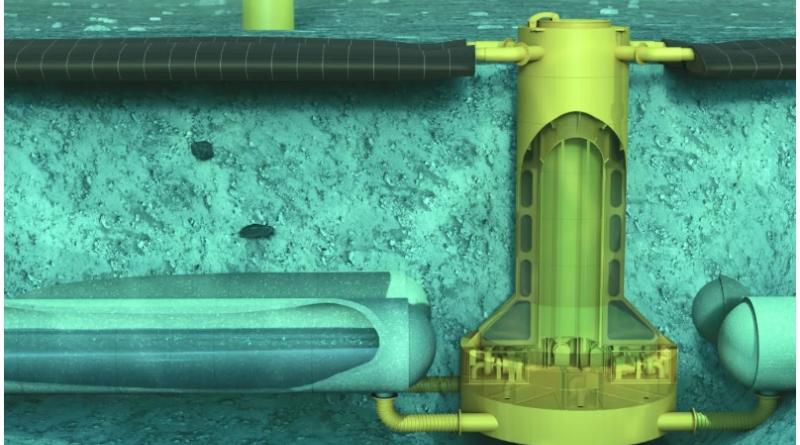 As useful as renewable energy sources are, they need to be backed up by storage systems that hold energy for times when the Sun isn’t shining or the wind isn’t blowing. Ocean Battery is a new design for an energy storage system that functions a bit like a hydroelectric dam at the bottom of the sea.

Developed by Dutch startup Ocean Grazer, the Ocean Battery is designed to be installed on the seafloor near offshore renewable energy generators, like wind turbines, floating solar farms, tidal and wave energy systems. It is made up of three components that together function on a principle similar to that of a hydro dam.

Buried in the seabed is a concrete reservoir that holds up to 20 million liters (5.3 million gal) of fresh water, stored at low pressure. A system of pumps and turbines connects this reservoir to a flexible bladder on the seafloor. Excess electricity from the renewable sources can be used to pump water from the reservoir into the bladder. When the energy is needed, the bladder releases and, driven by the pressure of the seawater above it, squeezes its water back down to the reservoir, spinning turbines on the way to generate electricity that’s fed out into the grid.

The Ocean Grazer team says that the system has an efficiency of between 70 and 80 percent, and should be able to run an unlimited number of cycles over an operation lifetime of more than 20 years. It’s also fairly scalable – each concrete reservoir has a capacity of 10 MWh, so adding more of these can increase the overall capacity. Extra units of the pump and turbine machinery can also be added to boost the power output, if more energy is needed quickly.

The Ocean Battery concept is intriguing, but it’s far from the only ocean battery design in the works. Subhydro outlined a similar idea to pump seawater out of tanks placed at the bottom of the sea, then when electricity is needed the water is let it back in, spinning turbines as it fills the tank. MIT also described a similar concept using hollow concrete spheres. Another recent design worked off buoyancy, using electricity to drag and hold balloon-like containers underwater, then releasing them to generate electricity.

Still, there’s not going to be one solution that suits every situation, so solving a global problem like renewable energy storage is likely going to take a whole army of these different, creative ideas.

The team describes the Ocean Battery in the video below.

Michael Irving
Michael has always been fascinated by space, technology, dinosaurs, and the weirder mysteries of the universe. With a Bachelor of Arts in Professional Writing and several years experience under his belt, he joined New Atlas as a staff writer in 2016.

US plans 14.5 gigawatts of battery storage online by 2025