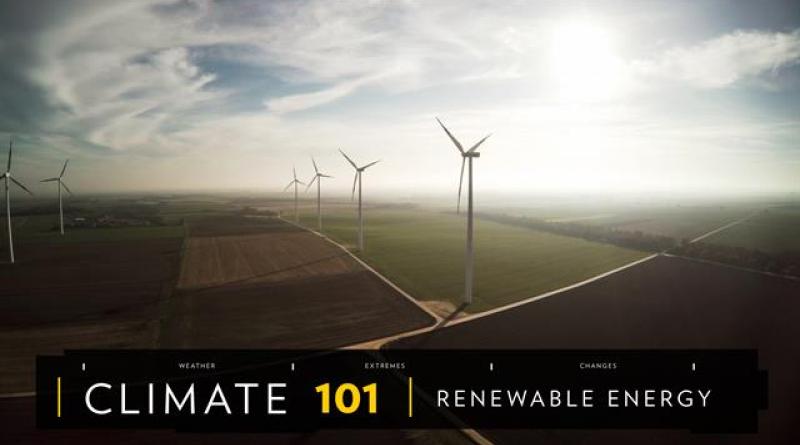 There are many benefits to using renewable energy resources, but what is it exactly? From solar to wind, find out more about alternative energy, the fastest-growing source of energy in the world–and how we can use it to combat climate change.

In any discussion about climate change, renewable energy usually tops the list of changes the world can implement to stave off the worst effects of rising temperatures. That's because renewable energy sources such as solar and wind don't emit carbon dioxide and other greenhouse gases that contribute to global warming.

Clean energy has far more to recommend them than just being "green." The growing sector creates jobs, makes electric grids more resilient, expands energy access in developing countries, and helps lower energy bills. All of those factors have contributed to a renewable energy renaissance in recent years, with wind and solarsetting new records for electricity generation.

For the past 150 years or so, humans have relied heavily on coal, oil, and other fossil fuels to power everything from light bulbs to cars to factories. Fossil fuels are embedded in nearly everything we do, and as a result, the greenhouse gases released from the burning of those fuels have reached historically high levels.

As greenhouse gases trap heat in the atmosphere that would otherwise escape into space, average temperatures on the surface are rising. Global warming is one symptom of climate change, the term scientists now prefer to describe the complex shifts affecting our planet’s weather and climate systems. Climate change encompasses not only rising average temperatures but also extreme weather events, shifting wildlife populations and habitats, rising seas, and a range of other impacts.

Of course, renewables—like any source of energy—have their own trade-offs and associated debates. One of them centers on the definition of renewable energy. Strictly speaking, renewable energy is just what you might think: perpetually available, or as the U.S. Energy Information Administration puts it, "virtually inexhaustible." But "renewable" doesn't necessarily mean sustainable, as opponents of corn-based ethanol or large hydropower dams often argue. It also doesn't encompass other low- or zero-emissions resources that have their own advocates, including energy efficiency and nuclear power.

Hydropower: For centuries, people have harnessed the energy of river currents, using dams to control water flow. Hydropower is the world's biggest source of renewable energy by far, with China, Brazil, Canada, the U.S., and Russia the leading hydropower producers. While hydropower is theoretically a clean energy source replenished by rain and snow, it also has several drawbacks.

Large dams can disrupt river ecosystems and surrounding communities, harming wildlife and displacing residents. Hydropower generation is vulnerable to silt buildup, which can compromise capacity and harm equipment. Drought can also cause problems. In the western U.S., carbon dioxide emissions over a 15-year period were 100 megatons higher than they normally would have been, according to a 2018 study, as utilities turned to coal and gas to replace hydropower lost to drought. Even hydropower at full capacity bears its own emissions problems, as decaying organic material in reservoirs releases methane.

Dams aren't the only way to use water for power: Tidal and wave energy projectsaround the world aim to capture the ocean's natural rhythms. Marine energy projects currently generate an estimated 500 megawatts of power—less than one percent of all renewables—but the potential is far greater. Programs like Scotland’sSaltire Prize have encouraged innovation in this area.

Wind: Harnessing the wind as a source of energy started more than 7,000 years ago. Now, electricity-generating wind turbines are proliferating around the globe, and China, the U.S., and Germany are the leading wind energy producers. From 2001 to 2017, cumulative wind capacity around the world increased to more than 539,000 megawatts from 23,900 mw—more than 22 fold.

Some people may object to how wind turbines look on the horizon and to how they sound, but wind energy, whose prices are declining, is proving too valuable a resource to deny. While most wind power comes from onshore turbines, offshore projects are appearing too, with the most in the U.K. and Germany. The first U.S. offshore wind farm opened in 2016 in Rhode Island, and other offshore projects are gaining momentum. Another problem with wind turbines is that they’re a danger for birds and bats, killing hundreds of thousands annually, not as many as from glass collisions and other threats like habitat loss and invasive species, but enough that engineers are working on solutions to make them safer for flying wildlife.

Solar: From home rooftops to utility-scale farms, solar power is reshaping energy markets around the world. In the decade from 2007 and 2017 the world's total installed energy capacity from photovoltaic panels increased a whopping 4,300 percent.

In addition to solar panels, which convert the sun's light to electricity, concentrating solar power (CSP) plants use mirrors to concentrate the sun's heat, deriving thermal energy instead. China, Japan, and the U.S. are leading the solar transformation, but solar still has a long way to go, accounting for around two percent of the total electricity generated in the U.S. in 2017. Solar thermal energy is also being used worldwide for hot water, heating, and cooling.

Critics of corn-based ethanol, for example, say it competes with the food market for corn and supports the same harmful agricultural practices that have led to toxic algae blooms and other environmental hazards. Similarly, debates have erupted over whether it's a good idea to ship wood pellets from U.S. forests over to Europe so that it can be burned for electricity. Meanwhile, scientists and companies are working on ways to more efficiently convert corn stover, wastewater sludge, and other biomass sources into energy, aiming to extract value from material that would otherwise go to waste.

Geothermal: Used for thousands of years in some countries for cooking and heating, geothermal energy is derived from the Earth’s internal heat. On a large scale, underground reservoirs of steam and hot water can be tapped through wells that can go a mile deep or more to generate electricity. On a smaller scale, some buildings have geothermal heat pumps that use temperature differences several feet below ground for heating and cooling. Unlike solar and wind energy, geothermal energy is always available, but it has side effects that need to be managed, such as the rotten egg smell that can accompany released hydrogen sulfide.

Cities, states, and federal governments around the world are instituting policies aimed at increasing renewable energy. At least 29 U.S. states have set renewable portfolio standards—policies that mandate a certain percentage of energy from renewable sources, More than 100 cities worldwide now boast at least 70 percent renewable energy, and still others are making commitments to reach 100 percent. Other policies that could encourage renewable energy growth include carbon pricing, fuel economy standards, and building efficiency standards. Corporations are making a difference too, purchasing record amounts of renewable power in 2018.

Wonder whether your state could ever be powered by 100 percent renewables? No matter where you live, scientist Mark Jacobson believes it's possible. That vision is laid out here, and while his analysis is not without critics, it punctuates a reality with which the world must now reckon. Even without climate change, fossil fuels are a finite resource, and if we want our lease on the planet to be renewed, our energy will have to be renewable.

[Video] Biomass in the era of Renewables.