Utility customers and clean energy advocates say the proposed sale is being rushed through to avoid scrutiny.

In the next week, the boards of electric cooperative utilities across Minnesota will vote on whether to approve a plan to sell, rather than close, a North Dakota coal-fired power plant that has provided them with electricity for decades.

But the utilities have done little to disclose that the votes are taking place or to solicit the views of customers, who, in the cooperative model, are also shareholders.

“This is supposed to be a democratic organization,” said Veda Kanitz of Lakeville, Minnesota, a customer of Dakota Electric and a climate activist. She said that the cooperatives are trying to rush through the sale to avoid scrutiny and that selling the plant, which would extend its life, “makes no sense at all.”

Kanitz and other customers and environmental advocates are organizing to put pressure on the boards to reject the deal or at least delay a decision that they say is a turning point in determining whether the cooperatives are serious about addressing climate change. At the same time, backers of the sale say it is the best option for preserving jobs at the plant and avoiding litigation with coal interests.

The owner of the plant is Great River Energy, a company based in a Minneapolis suburb that provides electricity for 28 cooperatives, serving more than 700,000 customers, mainly in Minnesota. Great River is proposing to sell Coal Creek Station, the largest power plant in North Dakota, to Rainbow Energy Marketing, a company that says it will try to install a carbon capture system at the plant and then use federal tax credits tied to the system to help make the plant financially viable. If the sale goes through, Rainbow Energy would also take ownership of the high-capacity power line that delivers electricity from the plant to Minnesota.

The sale agreement calls for Great River to continue buying electricity from the plant for 10 years, a provision that opponents say is a bad idea in terms of costs and damage to the environment.

Great River said in May 2020 that it would close the plant in two years, but the company changed course to agree to a sale following strong pushback from North Dakota leaders.

Last week, Inside Climate News reported on how this proposed sale looks from the perspective of North Dakota, where there is broad support for the sale. The situation is more complicated in Minnesota.

The conflict over the sale illustrates the divide between Minnesota electricity consumers and the North Dakota workers who help to produce the electricity, and between suburban cooperative utilities that emphasize climate concerns and rural co-ops whose members are more likely to support coal power.

He said one of his biggest concerns is that Great River is selling the power line for less than it should be worth.

Two other people with direct knowledge of the proposal, including a board member of one of the cooperatives, confirmed those figures. Both sources said they did not want to be identified because they were not authorized to speak about the details of the sale. Rainbow Energy did not respond to a request for comment.

Great River declined to comment on the sale prices, citing a confidentiality agreement, and declined a request to interview its CEO, David Saggau. But the company provided a statement explaining some of its reasons for agreeing to the sale.

The company said the sale is one part of a larger plan to make a transition to clean energy, which includes a big investment in wind energy projects. By increasing renewable energy and reducing emissions through other actions, the company says it is ahead of schedule to meet Minnesota’s goal of cutting carbon emissions 80 percent from 2005 levels by 2050.

The agreement to sell Coal Creek says Great River will continue to buy nearly all of the plant’s output for two years and then buy a much smaller share for the remaining eight years.

“Great River Energy is building a power supply portfolio that will serve its member-owner cooperatives with clean, affordable and reliable energy for decades,” the company said.

The prices of $1 for the plant and $225 million for the power line show that the line is much more valuable than the plant, which makes sense considering that Great River has said the plant lost $170 million in 2019 and has lost money every year since 2008. 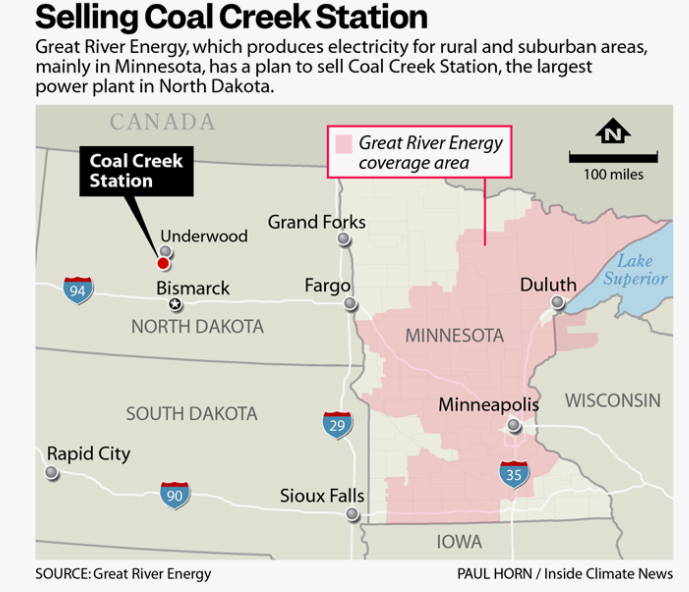 The power line could be an important part of delivering renewable energy from North Dakota to Minnesota if the coal plant closes. But the line is constrained by a moratorium on wind energy development passed by county leaders in McClean County, North Dakota, where the plant and coal mine are located. McClean County officials were trying to stop wind development as part of a larger strategy to put pressure on Great River to sell the plant rather than close it. County officials have said they may be willing to lift the moratorium if the plant would remain open, which would allow Rainbow Energy to unlock the value of the line.

Noble said he laments that Great River responded by doing exactly what county leaders wanted: pursuing a sale of the plant that includes a contract to continue buying coal power.

Great River is one of the largest of a group of power plant owners that mainly serve rural electric cooperatives. Rural electric co-ops are part of a legacy of the federal government’s rural electrification programs in the 1930s, leading to hundreds of local utilities.

While large, investor-owned utilities are facing financial and investor pressure to reduce carbon emissions, cooperatives have been slow to make this transition for reasons that include fewer financial resources and a customer base of shareholders that has been less adamant in pushing for a swift transition. 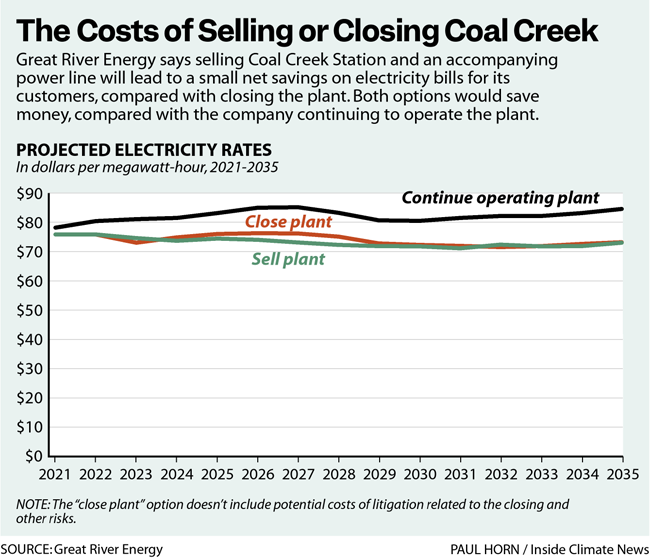 But some cooperatives are now placing a greater emphasis on cutting emissions, especially cooperatives that are located in formerly rural areas that have become suburbs, which describes some of Great River’s customer base.

Cooperatives also have a history in recent decades of being tightly controlled by a few people and not sharing information with customers, said Duane Ninneman, executive director of Clean Up the River Environment, or CURE, a Minnesota-based nonprofit that works on environmental issues and on improving accountability in electric cooperatives.

He said the lack of transparency surrounding the Coal Creek sale “reveals the problems in the rural electric cooperative business model from top to bottom.”

A Great River spokeswoman said the utility has “provided information―during meetings and in writing―about these transactions to our board of directors and member cooperatives.”

The Coal Creek sale is leading to divisions among the 28 cooperatives that Great River serves, with some of the strongest opposition coming from Connexus Energy, the largest, serving about 130,000 customers in the north suburbs and exurbs of Minneapolis-St. Paul.

Environmental advocates, including Veda Kanitz, said Connexus’ board is likely to be one of the only cooperatives to go against Great River’s recommendation and vote to reject the deal. A Connexus spokesman declined to comment.

Several other cooperatives would need to follow suit to be able to deprive the plan of the support it needs for the sale under Great River’s governance rules. The boards need to take their votes by July 30, a deadline set in the sale agreement.

The second largest cooperative is Dakota Electric in the south suburbs of Minneapolis-St.Paul, and consumers who have reached out to the cooperative’s leadership have said their board is close to evenly divided about whether to support the deal, Kanitz said. Dakota Electric did not respond to a request for comment.

Kanitz, who is a high school science teacher, said she is opposing the sale because of a desire to improve the world in which her students, children and grandchildren will be living.

“I understand that we cannot wait another 10 years to start closing coal plants,” she said.

But, she said, she realizes that there are fewer climate activists in the Great River member cooperatives in rural Minnesota, which tend to be much more politically conservative and are more likely to support coal power.

So far, the public comments and advocacy have been dominated by people who oppose the sale.

“I always believe that people can make the right decision and it’s useful to get information from the people who will be affected,” said state Rep. Liz Reyer, a Democrat, who is a Dakota Electric customer and has been part of organizing to oppose the deal.

She said she views the sale as incompatible with her constituents’ concerns about climate change and their desire for the utility to make a transition to renewable energy.

One problem with the process is that customers don’t have key details about the sale agreement and don’t know that the vote is happening within a few days, Reyer said.

If enough cooperative boards vote to support the planned sale, there remain several hurdles before the sale is final, including approval of the plant transfer by the Federal Energy Regulatory Commission and approval of transferring the power line by the Minnesota Public Utilities Commission.

Also, either Great River or Rainbow Energy could decide to scrap the proposal, although the party that leaves the agreement would be liable for a penalty of an undisclosed amount.

Sale Would Lead to Small Savings

Great River has done little to explain the details of the plan to customers. The most comprehensive explanation is in an 84-page document that the company sent to its member cooperatives’ leaders which shows some of the financial and legal considerations that have not been widely discussed.

According to a copy obtained by Inside Climate News, Great River is estimating that the agreement with Rainbow Energy will lead to a net benefit of $131 million over 15 years, compared to closing the plant. The benefit in terms of monthly bills would be barely noticeable.

There is a big unknown that could make closing the plant much more expensive, which is the possibility that North American Coal Corp., owner of the mine that supplies the plant, might sue Great River over contractual issues related to the closing.

Great River says selling the plant would release the company from the risk from costs of litigation. North American Coal did not respond to a request for comment.

Great River also would save money for severance pay for plant employees, and the agreement calls for Rainbow Energy to gradually assume some responsibility for environmental cleanup.

Biden Refuses to Shut Down Dakota Access Pipeline, Despite Campaign Pledges on Tribal Relations and Climate.