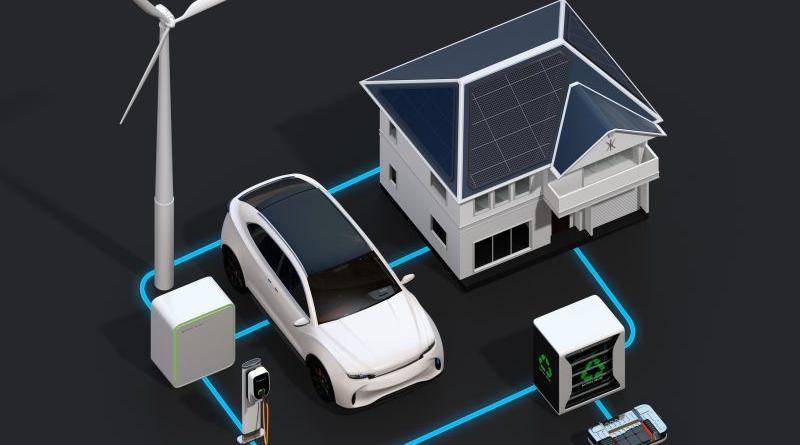 European electricity grid operators TenneT, Swissgrid and Terna have launched a cross-border blockchain platform, saying it will help stabilise the grid while allowing households to earn “a few hundred euros per year” from their home and car batteries.

The Equigy Platform, launched on 23 April, is a software that uses blockchain technology to “register and validate” tens of thousands of individual “energy transactions” between batteries and the grid.

This will allow households to be paid for those transactions depending on the time of day, and the price of electricity that applies.

For instance, discharging a car or a home battery would be worth money when too little electricity is being produced to meet demand, while charging would be cheap during times of excess power production.

“This will enable millions of European households and owners of electric vehicles to actively offer the flexible capacity of their cars and house batteries on the energy markets to stabilise the electricity system,” TenneT says in a statement.

The open-source software will be made available free of charge but relies on “aggregators” and smart meters installed in people’s homes.

The platform will be launched initially by transmission system operators TenneT (Germany and the Netherlands), Swissgrid (Switzerland) and Terna (Italy), but Danish grid operator Energinet also formally expressed its intention to join the consortium. And more European grid operators are expected to take part in the future.

“Equigy originated from European cooperation,” said Manon van Beek, the CEO of TenneT. “In a common European market we will have to develop solutions together,” she added, saying “it would be a shame and unnecessarily expensive to develop different systems.”

TSOs have the statutory duty to balance supply and demand of electricity, for which they traditionally rely on back-up power generators – often coal or gas-fired plants.

With increasing shares of variable renewable and decentralised electricity production, that task is becoming more and more challenging. Therefore, TSOs are turning to other sources of flexibility.

“In tomorrow’s energy world, millions of small decentralised electricity producers, consumers and storage facilities such as electric vehicles, domestic batteries and heat pumps will help to cope with grid bottlenecks and balance fluctuations between generation and consumption,” the TenneT statement says.

“In this way, they take over tasks that today are mainly carried out by large power plants such as coal- and oil-fired power plants with a capacity of several hundred megawatts.”

These new sources of flexibility are a cost-effective way for TSOs to fulfil their duties. And smaller grid operators at local level could also benefit from the platform “through data insights, allowing them to manage their networks more efficiently,” according to the Equigy website.

“If Equigy becomes a success, it can save billions of euros,” van Beek explained, saying “we would have to invest significantly less in strengthening our grid”.

According to Eurelectric, the European power sector association, “optimised distribution grids coupled with flexibility sources, will be critical to deliver on the European Green Deal’s carbon neutrality objectives.”

Eurelectric is currently conducting a study to assess the investments needs at distribution level. The power sector association backs a revision of EU rules on trans-European energy infrastructure – the TEN-E regulation – in order to put “more focus and support for distribution investments”.

“Over the past five years, smart grids have received 10 times less funds from the Connecting Europe Facility than gas networks or electricity transmission networks,” Eurelectric says.

Blockchain is an “immutable” digital ledger that is stored on the devices of all parties involved.

For each new transaction, a new “block” of information is added, which thereafter cannot be deleted or altered. Erroneous transactions can be corrected by adding another negative transaction of the same size, but both transactions will remain visible.

Because the ledger cannot be changed and is saved on several devices, it can be validated by all parties. This allows energy transactions can be settled in a transparent way.

However, the software cannot work by itself. First of all, citizens need to install a “smart meter”, an internet-connected device that measures the electricity flows in their homes, a TenneT spokesperson told EURACTIV.

The platform also needs the collaboration of so called “aggregators”, or companies that act as an intermediary between electricity end-users and power system operators, such as energy suppliers.

It will be up to aggregators, for example, to develop apps that allow customers to offer the flexibility of their technologies in exchange for cash.

The TenneT spokesperson was not aware of any regulatory barriers to implementation of the platform.

US power generators reporting savings, other benefits from phasing out coal.