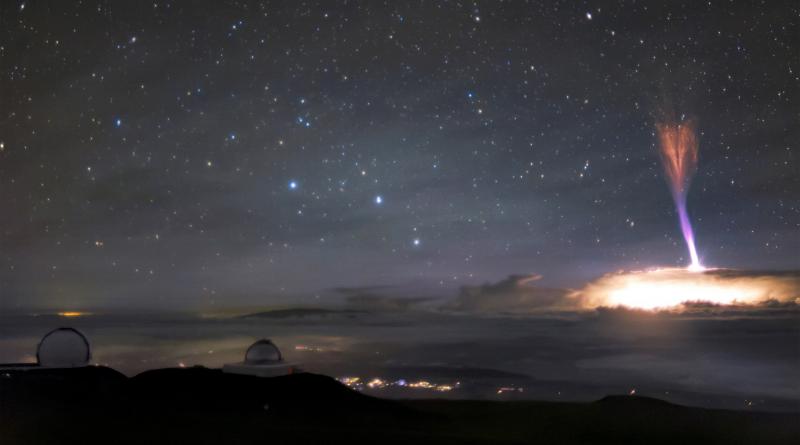 But a new image from an observatory in Hawaii captures both a red sprite and a blue jet in the same shot. The photo, released on Feb. 24, comes courtesy a "cloud cam" at the Gemini North telescope, part of the International Gemini Observatory located on Maunakea.

Sprites and jets are upper-atmospheric phenomena caused by electrical discharges. Sprites, which are typically reddish-orange and sometimes blue-green, occur in the mesosphere, between 30 and 50 miles (50 and 80 kilometers) in altitude. They're often triggered by regular, lower-altitude lightning, but are much cooler in temperature. They're also sometimes shaped like jellyfish. Blue jets also occur at high altitude, triggered by a discharge of electricity from the positively-charged upper portion of a storm cloud to the negatively-charged cloud top, according to a paper published Jan. 20 in the journal Nature. They typically appear as blue streamers shooting spaceward.

The camera that captured the red sprite and blue jet was a modified consumer-grade DSLR (digital single-lens reflex), customized to take photographs within a fraction of a second to 30 seconds after lightning strikes. The cameras are mounted on the roof of the observatory, pointed toward the most likely locations of incoming storms. The Gemini North Observatory sits at 13,800 feet (4,200 meters), affording a fabulous view of the surrounding weather.

Though sprites and jets are rarely witnessed from the ground, they're not uncommon above thunderstorms. In 2017, an astronaut aboard the International Space Station witnessed 245 blue flashes in 160 seconds over one storm. Scientists debate whether these phenomena are simply transient or whether they have any lasting effects. For example, if their passage alters the chemistry of the upper atmosphere, they might have an effect on the ozone layer, researcher Hans Stenbaek-Nielsen of the University of Alaska at Fairbanks told Live Science in 2011.

Studying sprites and jets is difficult, physicist Ryan Haaland of Fort Lewis College in Colorado told Live Science in 2015. Scientists take measurements from ground-based observatories and sometimes fly specially-instrumented research aircraft close to storms to detect them. But as the phenomena last just tens of milliseconds, they remain mysterious.

Could we ever pull enough carbon out of the atmosphere to stop climate change?