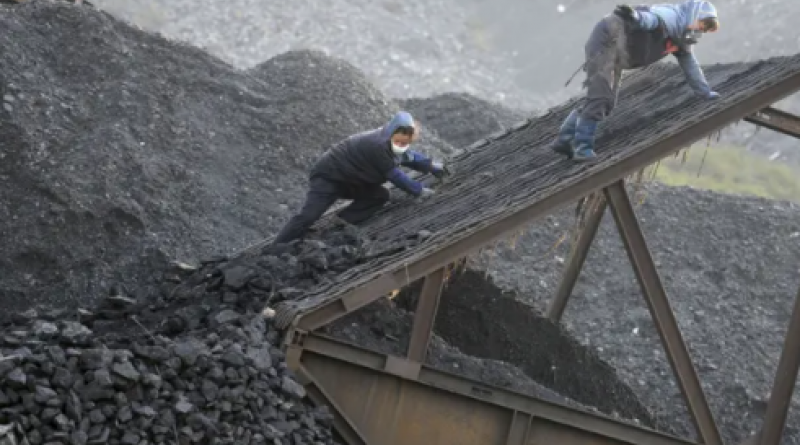 The G20 countries have provided more than $3.3tn (£2.4tn) in subsidies for fossil fuels since the Paris climate agreement was sealed in 2015, a report shows, despite many committing to tackle the crisis.

This backing for coal, oil and gas is “​​reckless” in the face of the escalating climate emergency, according to the report’s authors, and urgent action is needed to phase out the support. The $3.3tn could have built solar plants equivalent to three times the US electricity grid, the report says.

The G20 countries account for nearly three-quarters of the global carbon emissions that drive global heating.

The report, by BloombergNEF and Bloomberg Philanthropies, focuses on three areas where immediate action is needed to limit global temperature rise to 1.5C: ending fossil fuel subsidies, putting a price on carbon emissions and making companies disclose the risks posed by climate change to their businesses.

The report says all 19 G20 member states continue to provide substantial financial support for fossil-fuel production and consumption – the EU bloc is the 20th member. Overall, subsidies fell by 2% a year from 2015 to reach $636bn in 2019, the latest data available.

But Australia increased its fossil fuel subsidies by 48% over the period, Canada’s support rose by 40% and that from the US by 37%. The UK’s subsidies fell by 18% over that time but still stood at $17bn in 2019, according to the report. The biggest subsidies came from China, Saudi Arabia, Russia and India, which together accounted for about half of all the subsidies. 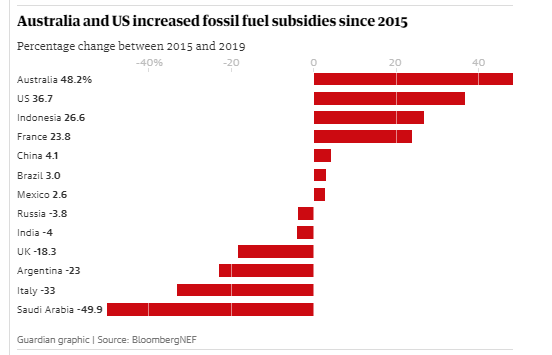 The G20 agreed in 2009 to phase out “inefficient” fossil fuel subsidies but did not define inefficient and little progress had been made.

“On paper, global leaders and governments are recognising the urgency of the climate challenge and the G20 countries have all made ambitious commitments to scale down fossil fuel development and transition to a low-carbon economy,” said Antha Williams, the environment lead at Bloomberg Philanthropies.

“But, in reality, the action taken by these countries up until this point is a far cry from what is needed. As a host of climate emergencies intensify around the world, the continued development of fossil fuel infrastructure is nothing short of reckless. We need more than just words – we need action.”

The UN special climate envoy, Michael Bloomberg, the founder of Bloomberg Philanthropies, and the UN-backed Net-Zero Asset Owner Alliance (NZAOA), which represents more than $6.6tn of investments, both urged governments to act, before a meeting of G20 energy and climate ministers in Italy on Friday.

“New [commitments] and net-zero targets from some G20 countries are warmly welcome,” said Günther Thallinger, at the financial services firm Allianz and the chair of NZAOA. “However, pledges and targets alone will not be sufficient to change course.”

The report found that 60% of the fossil fuel subsidies went to the companies producing fossil fuels and 40% to cutting prices for energy consumers.

“This funding really encourages the potentially wasteful production and use of fossil fuels and can mean emission-intensive assets are funded today, thereby locking in their emissions for decades,” said Vicky Cuming at BloombergNEF and an author of the report.

“There’s evidence that [subsidies] disproportionately benefit wealthier consumers, rather than vulnerable groups,” she said. The gilets jaunes (yellow vests) protests in France in 2018 showed that cutting fuel subsidies was politically delicate, she said.

Experts say ensuring less well-off consumers are protected from such changes is crucial for policies to be successful.

The report also examined how G20 countries were putting a price on carbon pollution. It found that more than 80% of emissions were covered by such prices in France, Germany and South Africa.

The report says making companies disclose the risks the climate crisis poses to their businesses is critical to enabling financial markets to push capital away from polluting sectors and into green ones. But only the UK and EU have said they will enforce such a policy.

A recent report by the International Institute for Sustainable Development concluded that reforming fossil fuel subsidies aimed at consumers in 32 countries could reduce CO2 emissions by 5.5bn tonnes by 2030, equivalent to the annual emissions of about 1,000 coal-fired power plants. It said these changes would also save governments nearly $3tn by 2030.

In June, more than 500 organisations called on US policymakers to eliminate fossil fuel subsidies from the US tax code. “It is past time to remove the burden of dirty energy support from the public and instead turn the efforts of the government to supporting clean energy and the jobs it generates,” the letter says.

Global business leaders call on the G20 to act now to reinvigorate the global economy.