REN21: Cities can change the game in the fight against emissions and air pollution. Fossil fuel bans jump fivefold in 2020. 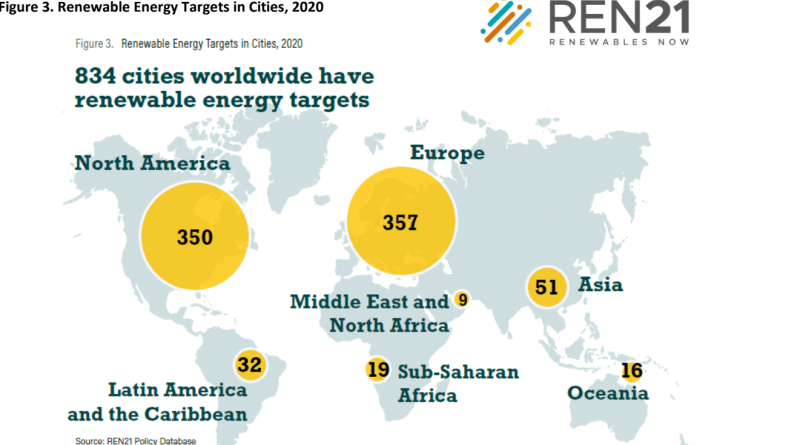 The pandemic has thrown into stark relief the global battle of cities for cleaner air and a better future. The 2021 edition of REN21’s Renewables in Cities Global Status Report, the only stocktaking of cities’ energy transition efforts worldwide, shows that one billion people live in cities with a renewable energy target or policy. The number of cities that have enforced partial or complete bans on fossil fuels jumped five fold in 2020. For the second year, REN21 takes the temperature of how cities worldwide use renewable energy to battle emissions to prevent air pollution and climate change.iii More than half of the global population lives in cities, which account for three-quarters of global final energy consumption.

“With their impact at scale, cities are our best bet to plan, develop and build a renewable future. But all too often their potential for transformation remains massively underused,” says REN21’s Executive Director, Rana Adib.

“It’s a tough job to turn low-carbon ambitions into reality in built and densely packed environments. National governments must put money, capacity and above all legislative powers into the hands of local authorities.”

A critical factor for the success of cities’ climate strategies is to rapidly replace fossil fuels with renewable energy in heating and cooling as well as in transport.

These sectors are responsible for the biggest share of global emissions, and they are best addressed at the local level.

The report shows that often, purchasing renewable electricity for the city’s own operations is one of the first steps local leaders take. But according to Adib, this is not enough.

“Cities like Hamburg, San Francisco and Shanghai show, the more ambitious they are, the more they think of renewable energy everywhere.

They impose strict building codes and renewable energy obligations. But most importantly, they set an end date to the use of gas, oil and coal.” By 2020, 43 cities had done so and enforced fossil fuel bans in heating and/or transport, five times as many as in 2019. iv In total, one billion people - about one quarter of the global urban population - live in cities with a renewable energy target or policy.

“But as inspiring as these examples are,” says Adib, “we are still a far cry from what is needed to curb climate change in time.” 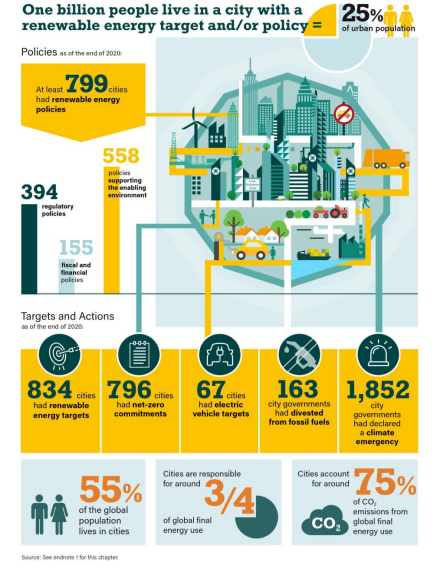 Cities are high-impact areas: they are home to more than 55% of the global population and account for around three-quarters of global final energy consumption. Further, cities also are essential for accelerating the development of renewables in sectors that lag, namely buildings and transport. Rapidly replacing fossil fuels with renewables across high-polluting sectors, namely the heating and cooling of buildings and transport, is critical for the success of urban climate strategies and helps to create sustainable, equitable and thriving cities – more resilient, with more local jobs and cleaner air.

Key Findings of the 2021 Edition

Financing was provided by Deutsche Gesellschaft für Internationale Zusammenarbeit (GIZ) on behalf of the German Federal Ministry of the Environment, Nature Conservation and Nuclear Safety (BMU). This report is co-financed by the Covenant of Mayors in Sub-Saharan Africa, an initiative supported by financial contributions of the European Union, the German Federal Ministry for Economic Cooperation and Development (BMZ), and the Spanish Agency for International Development Cooperation (AECID).