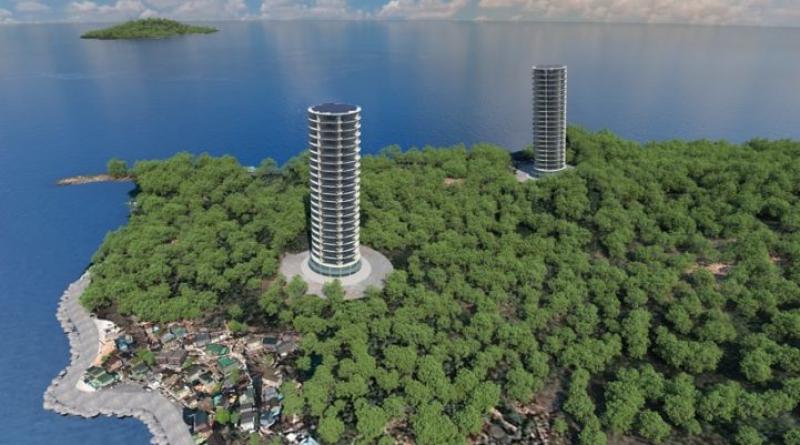 Odin Energy is lining up projects in Italy and South Korea. Can it find a niche to compete with mainstream wind turbines?

The company’s circular tower concept can have up to 12 floors, each containing a central VAWT, allowing for much greater energy production per unit of area than would be possible with a single turbine.

As well as increasing total rated power, the company says the upper floors of its Odin towers can access higher wind speeds and thus deliver up to four times the average electricity production of a ground-mounted turbine.

A video of the prototype Odin tower, built in 2011 on Jeju Island, South Korea and tested by the Korea Testing & Research Institute and the Jeju Energy Corporation between 2015 and 2017, shows that the concept is almost silent in operation, making it suitable for urban environments.

Odin Energy founder and Vice President Soo Yun Song told GTM the company is in talks about building towers in South Korea as part of a move to convert island grids to renewable energy and, separately, as part of a zero-energy building initiative by the Seoul metropolitan government.

The Seoul project would involve adding Odin tower floors onto an existing building, Song said in an interview.

The ability to add Odin tower structures onto existing city rooftops “is one strength that we think we have [in comparison to] other wind technologies,” said Hyokon Zhiang, an Odin Energy adviser, in a video interview.

Elsewhere, the Italian VAWT manufacturer Ropatec, which supplies the 19-kilowatt turbines used in Odin towers, is in discussions with a potential construction-sector customer in Italy. “Ropatec has requests from the Italian market,” confirmed Ropatec’s Carlo Zanella in an email.

Odin Energy estimates the capital cost for a first-of-its-kind 10-story tower would be around $1.4 million, with a levelized cost of energy (LCOE) of around $90 per megawatt-hour.

Although this cost could likely be reduced by building taller towers or through the serial production of tower components, it remains high compared to traditional onshore wind.

Lazard’s latest LCOE study, published in October, puts onshore wind LCOE values in a range from $26 to $54 per megawatt-hour.

Instead, said Zhiang, the technology was likely to appeal to urban developers or companies tasked with building island microgrids, both environments where space might be at a premium and the low noise profile of Odin towers could be an asset.

The towers could well be competitive in such environments: The latest Lazard study to include diesel, in 2017, put the LCOE for diesel-based reciprocating engines at between $197 and $281 per megawatt-hour.

In cities and other urban environments, meanwhile, the cost of energy from Odin towers could be offset by commercial profits from alternative applications housed in the ground and lower floors, according to Zhiang.

In a 12-story building, for example, the lowest one or two floors could be used for electric-vehicle charging stations or other commercial or industrial activities.

For all Odin Energy’s promise, Brian Gaylord, principal analyst with Wood Mackenzie for Latin America and Southern Europe, said the company faces challenges in gaining a foothold in the wind market.

“There's a reason that virtually all wind power build is done with three-bladed, upwind, geared drivetrain turbine models,” he said in an email. “It's the most cost-competitive way to produce wind power generation.”

Gaylord claimed numerous quiet VAWT technologies have come out of South Korea over the years, pointing out that “none of them has really ever gained traction.”

Vertical-axis wind turbines and other small-scale wind power technologies have so far failed to gain much market traction against large-scale wind turbines at utility scale or with solar PV at distributed scale. Distributed wind players continue to hope that research and development funding can increase efficiency and drive down costs to allow the technology to compete in certain niche applications, such as microgrids.

But Gaylord noted that claims of greater efficiency “may be true, but that doesn't really matter because the name of the game is the cost of electricity, especially when we talk about distributed generation. I think it’s very much PV's domain.”