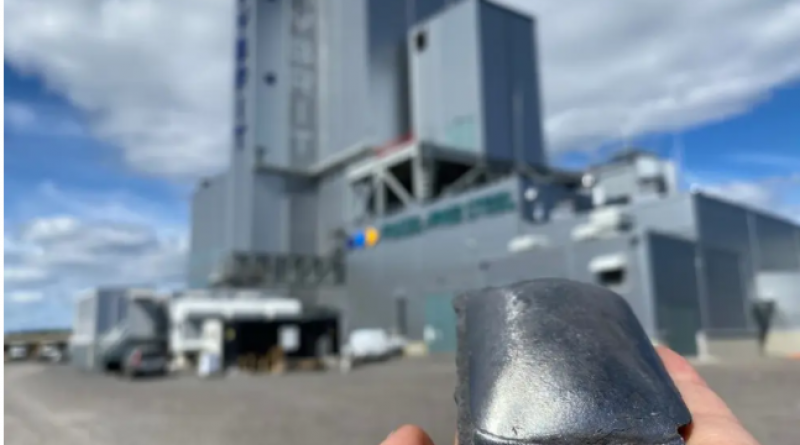 Studies have shown that conventional processes emit nearly two tonnes of carbon dioxide for every tonne of steel produced, with global manufacture of the alloy accounting for about 7-8 per cent of greenhouse gas emissions.

HYBRIT, which stands for Hydrogen Breakthrough Ironmaking Technology, was created in 2016 by the steel maker SSAB, the mining company LKAB, and the energy firm Vattenfall with the aim of developing a technology for fossil-free iron-and steelmaking.

“The test delivery is an important step toward a fully fossil-free iron and steel production value chain and a milestone for the HYBRIT partnership between SSAB, LKAB and Vattenfall,” the Hybrit partnership noted in a statement.

In June, the three companies demonstrated for the first time the pioneering process by producing about 100 metric tons of hydrogen-reduced sponge iron made at Hybrit’s pilot plant in Luleå.

With the new hydrogen-reduction process, Hybrit said in an article published in the journal Metals, the fossil CO2 emission decreases from 1600 kg/ton of crude steel to 25 kg/ton.

“In this example, in northern Sweden, the availability of renewable electricity, such as hydropower and wind power, together with good access to biomass used in the HYBRIT route replaces the fossil fuel used in the Blast Furnace route, thus eliminating most of the fossil CO2 emissions,” it noted in the article.

This first sponge iron has since been used to produce the first steel made with this breakthrough technology.

Simulations also showed that the price for electricity needed for the process can be lowered by 6–7 per cent by utilising fossil-free energy sources such as wind power and optimising the production time in the electrolysis and the size of the hydrogen storage.

“It’s a crucial milestone and an important step towards creating a completely fossil-free value chain from mine to finished steel,” Jan Moström, President and CEO of LKAB, said in a statement.

“By industrialising this technology in the future and making the transition to the production of sponge iron on an industrial scale, we will enable the steel industry to make the transition. This is the greatest thing we can do together for the climate,” Mr Mostrom added.

Hybrit says the goal is to deliver fossil-free steel to the market and demonstrate the technology on an industrial scale as early as 2026.