A third of Americans are already facing above-average warming 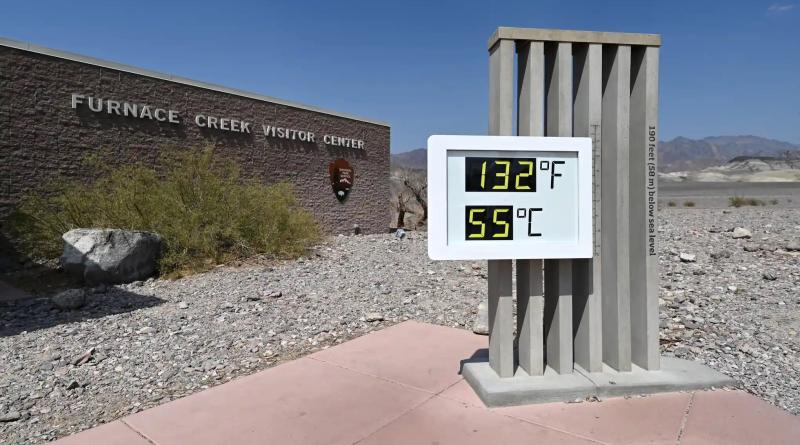 Temperatures in 499 counties across west, north-east and upper midwest US have already breached 1.5C (2.7F)

More than a third of the American population is currently experiencing rapid, above-average rates of temperature increase, with 499 counties already breaching 1.5C (2.7F) of heating, a Guardian review of climate data shows.

The US as a whole has heated up over the past century due to the release of planet-warming gases from burning fossil fuels, and swaths of the US west, north-east and upper midwest – representing more than 124.6 million people – have recorded soaring increases since federal government temperature records began in 1895.

Though the climate crisis is convulsing the US, it is doing so unevenly. Hotspots of extreme warming have emerged in many of America’s largest cities, and places as diverse as California’s balmy coast to the previously frigid northern reaches of Minnesota, while other places, particularly in the south, have barely seen their temperatures budge. 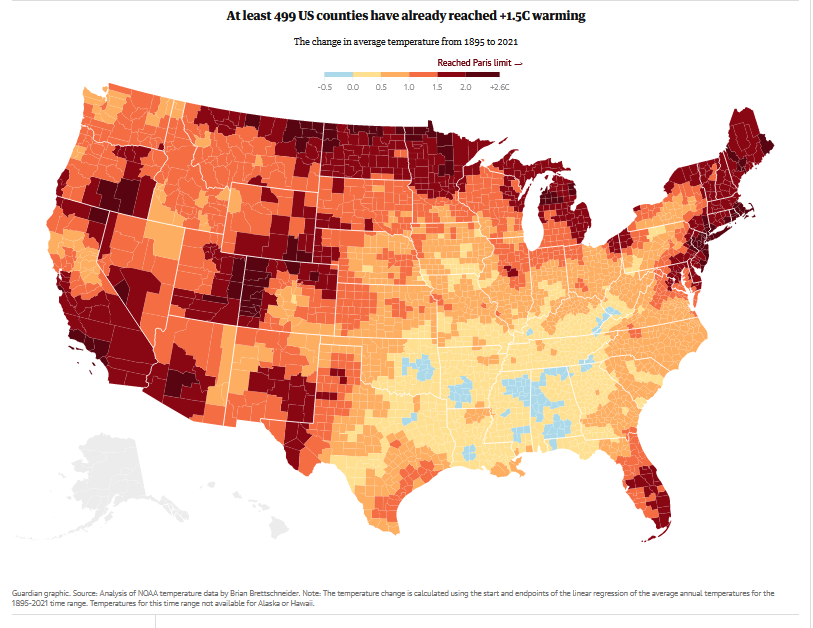 “The warming isn’t distributed evenly,” said Brian Brettschneider, an Alaska-based climate scientist who collated the county temperature data from the National Oceanic and Atmospheric Administration (Noaa). “Many places have seen dramatic changes, but there are always some places below the average who will think, ‘It didn’t seem that warm to me.’ The impacts differ depending where you are.”

Ventura county in California has heated up more than any other county in the contiguous US, according to the Noaa data, experiencing a 2.6C (4.75F) increase in total warming in the period from 1895 to 2021. Meanwhile, counties that include many of America’s largest cities, including New York, Los Angeles, Miami, Philadelphia, San Francisco and Boston, have all seen their average temperatures rise far beyond the national average, which stands at about a 1C (1.8F) increase on pre-industrial times. 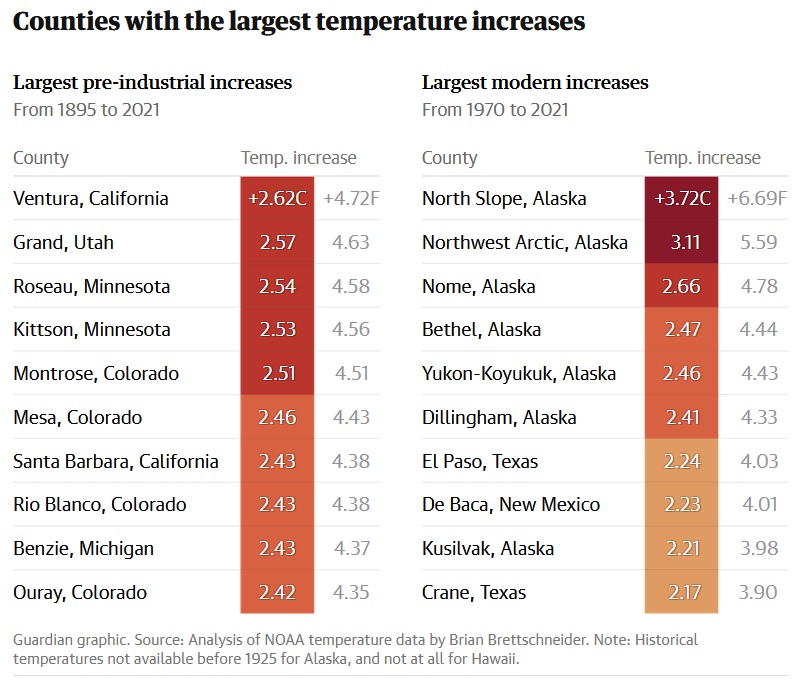 Mark Jackson, a meteorologist at the National Weather Service based in Oxnard in Ventura county said the county’s temperature increase was “a remarkable number, it’s a scary number when you consider the pace we are looking at”. Jackson said the county had seen a large increase in heatwaves, including a spell above 37C (100F) last summer that “really stressed” the local community.

Ventura county, which hugs the Californian coast north-west of Los Angeles, is known for a pleasant Mediterranean climate cooled slightly by the proximity of the ocean. But Jackson said that recent heatwaves have seen warm air flow down from mountains in the nearby Los Padres national forest to the coast, while the ocean itself is being roiled by escalating temperatures. “It’s been really remarkable to see it get that hot right up to the coast,” he said.

California is in the grip of its most severe drought in 1,200 years and scientists say this is fueling the heat seen in many places in the state – Los Angeles has warmed by 2.3C (4.2F) since 1895, while Santa Barbara has jumped by 2.4C (4.38F) – by reducing moisture in soils, which then bake more quickly.

Higher temperatures are also worsening the risk of wildfires in the state. “We lost everything,” said Tyler Suchman, founder of online marketing firm Tribal Core who in 2017 fled with his wife to escape a huge wildfire that razed their home in Ojai, in Ventura county. “It was harrowing. The winds were blowing like crazy and the hills lining the highway were all on fire, I had never seen anything like it.”

Just 11 months later, a separate wildfire destroyed the couple’s next home, in Malibu, as their neighbor scooped up water from his hot tub in a desperate attempt to tackle the flames. “No one wants us to move next to them now,” Suchman said. “You can see how the area has changed over the 18 years since we moved to Ojai. It’s a beautiful place but regrettably we can’t live there now, the risk is too great.”

Hotspots of above-average warming are found across the US. Grand county in Utah, a place of sprawling deserts, cliffs and plateaus, is the second fastest warming county in the lower 48 states, while every county in New Jersey, Massachusetts and Connecticut has warmed by more than 1.5C (2.7F) since 1895. 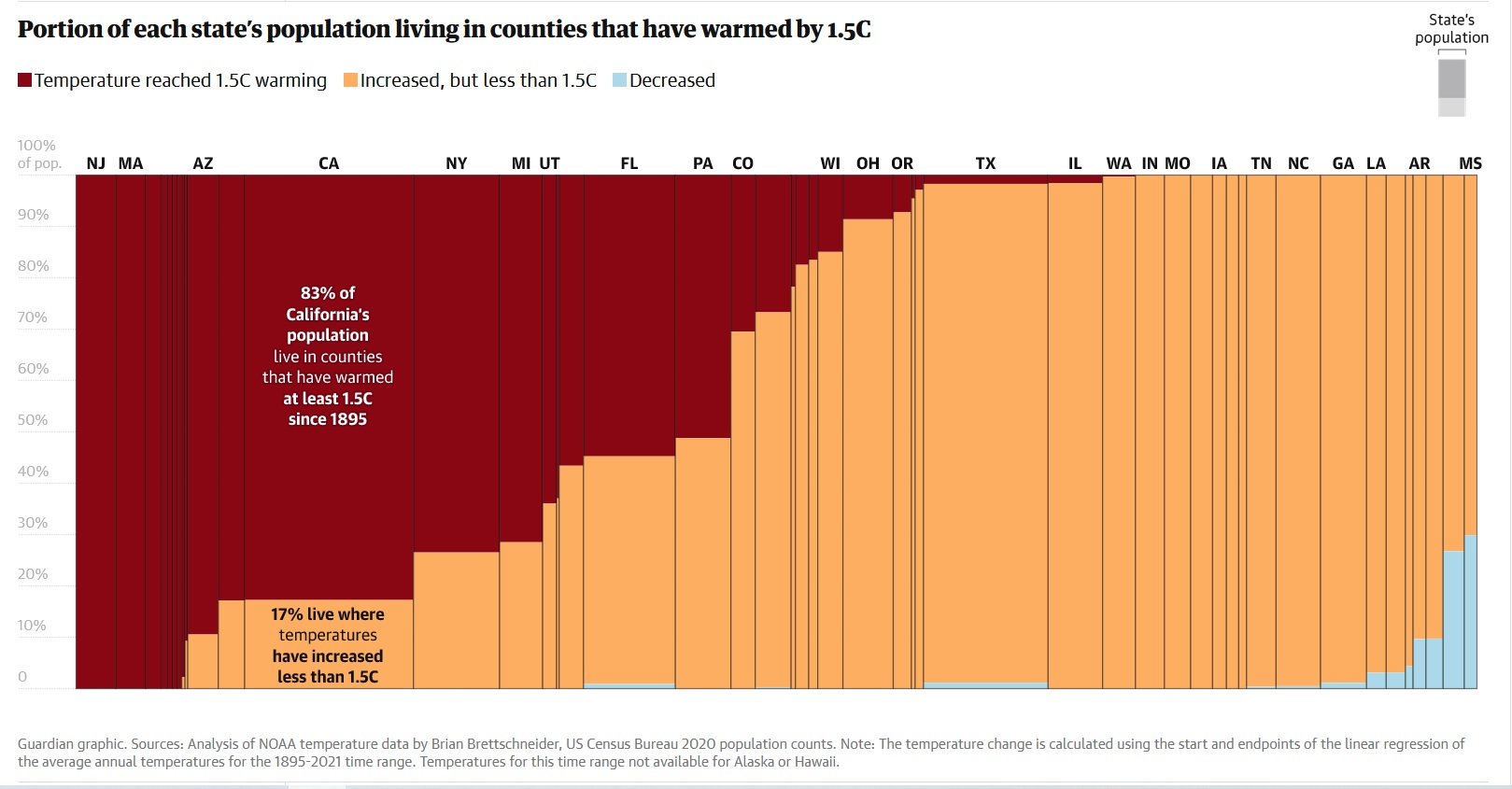 It’s the more northern latitudes that have experienced the most extreme recent heat, however, with counties in Alaska making up all of the top six fastest warming places since 1970 (comparable temperature data for Alaska does not go back further than the 1920s). Alaska’s North slope, situated within the rapidly warming Arctic, has heated up by an enormous 3.7C (6.6F) in just the past 50 years.

“There really is a climate shift under way in Alaska, everyone can see things are different than they used to be and everyone is concerned about what the future here will look like,” said Brettschneider, who added that even his teenage children had noticed the retreat of sea ice, an elongating fire season and a dearth of cold days.

The warmth is also melting frozen soils, known as permafrost, causing buildings to subside and roads to buckle. “If you drive on the roads near Fairbanks you better have a strong stomach because it feels like you’re riding a rollercoaster,” said Katharine Hayhoe, a climate scientist at Texas Tech University and chief scientist at the Nature Conservancy.

Other locations traditionally used to severe cold have also seen sharp temperature increases. Roseau and Kittson counties, in northern Minnesota, are both in the top five fastest warming counties in the lower 48 states, with their warming driven by winters that have heated up by around 3.8C (7F) in the state since modern record keeping began.

Winters are warming more quickly than summers because more heat usually escapes the land during the colder months, but it is now being trapped by greenhouse gases. “Some might say ‘well I like warmer winters’ but people are noticing negative impacts, such as changes to the growing season and the loss of cultural practices such as cross-country skiing races,” said Heidi Roop, a climate scientist at the University of Minnesota. “Even small temperature changes have big consequences.”

Globally, governments set a goal in the 2015 Paris climate agreement to avoid a temperature rise of 1.5C (2.7F) above the pre-industrial era. Beyond this point, scientists say, the world will face increasingly punishing heatwaves, storms, flooding and societal unrest.

While certain areas of the US have already passed 1.5C, the important metric is still the global average, Hayhoe said. “In some places a 2C increase is fine but 2.5C is when the wheels fall off the bus, some locations are OK with 5ft of sea level rise because of their elevation while others can’t cope with 5 in because they are low-lying,” she said. “Local vulnerability is very customized. What’s relevant for communities is whether the world meets its targets or not, it’s a collective target for the world.”

That global threshold is in severe peril, with some forecasts warning that 1.5C (2.7F) could be breached within a decade without drastic cuts to carbon emissions. Communities will need to brace themselves for the consequences of this, according to Roop.

“The warming we are seeing is pushing at the bounds of lived human experience, of what we thought was possible,” she said. “We are paying the costs for that and we need to prepare for the changes already set in motion, as well as to prevent further warming.”