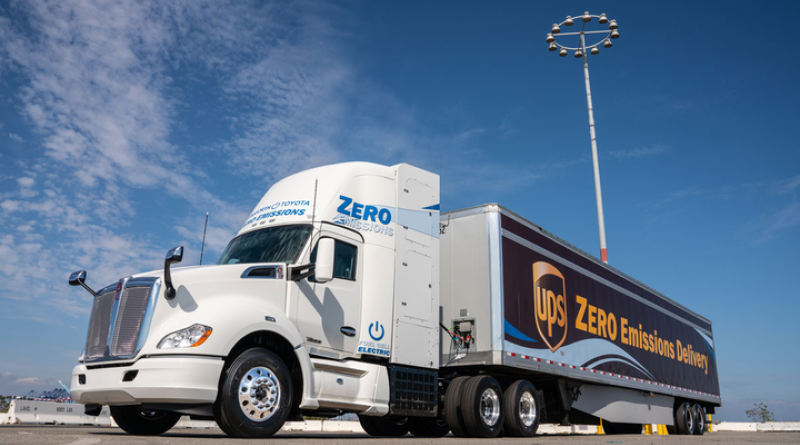 Toyota, Kenworth, the Port of Los Angeles and the California Air Resources Board (CARB) say they have taken the next great leap towards the future of zero-emission trucking, unveiling the first of Toyota and Kenworth's jointly developed fuel cell electric heavy-duty trucks before a crowd of media, government officials and industry and community leaders during a special event held at the Port of Los Angeles.

The new generation zero-emission truck expands on the capabilities of Toyota's first two Project Portal Proof-of-Concept trucks through enhanced capability, packaging, and performance while offering an estimated range of more than 300 miles per fill, twice that of a typical drayage trucks average daily duty cycle. Toyota and Kenworth will deploy a total of 10 trucks as part of the Zero and Near-Zero Emissions Freight Facilities Project (ZANZEFF), hauling cargo received at the Ports of Los Angeles and Long Beach, throughout the LA Basin.

"Toyota is committed to fuel cell electric technology as powertrain for the future because it's a clean, scalable platform that can meet a broad range of mobility needs with zero emissions," said Bob Carter, executive vice president for Automotive Operations Toyota. "The ZANZEFF collaboration and the innovative 'Shore-to Store' project allow us to move Heavy-Duty Truck Fuel Cell Electric technology towards commercialisation."

CARB has awarded $41 million dollars to the Port of Los Angeles for the ZANZEFF project as part of California Climate Investments, a California initiative that puts billions of Cap-and-Trade dollars to work reducing greenhouse gas emissions, strengthening the economy and improving public health and the environment?particularly in disadvantaged communities.

"This substantial climate investment by the state, matched by the project partners, will help speed up the number of zero-emission trucks in the California communities and neighbourhoods where they are needed the most," said CARB chair Mary Nichols. "It will provide a real-world at-work demonstration of innovative heavy-duty fuel-cell electric technologies. The project offers a commercial solution to move cargo and freight around the state using zero-emission trucks and equipment that protect air quality and cut climate-changing emissions."

Since operations began in April 2017, the Project Portal "Alpha" and "Beta" Proof of Concept Class 8 trucks have logged more than 14,000 miles of testing and real-world drayage operations in and around the ports of Los Angeles and Long Beach while emitting nothing but water vapour. The first Kenworth/Toyota Fuel Cell Electric Truck (FCET) under the ZANZEFF project will begin drayage operations in the fourth quarter, increasing the ports' zero emission trucking capacity and further reducing the environmental impact of drayage operations.

Expanding operations
The latest Fuel Cell Electric truck utilises the Kenworth T680 Class 8 model combined with Toyota's fuel cell electric technology and is part of -the ZANZEFF project. Pioneered by the Port of Los Angeles with leading support from Toyota, Kenworth, and Shell?the trailblazing endeavour provides a large-scale "Shore-to-Store" plan and a hydrogen fuel-cell-electric technology framework for freight facilities to structure operations for future goods movement. The initiative will help reduce emissions by over 500 tons of Greenhouse Gas and 0.72 weighted tons of NOx, ROG and PM10.

"The collaboration between the Port of Los Angeles, Kenworth, Toyota and Shell is providing an excellent opportunity to demonstrate the viability of fuel cell electric technology in both drayage service and regional haul commercial vehicle applications operating in Southern California," said Mike Dozier, general manager of Kenworth Truck Company and Paccar vice president. "The performance of the 10 Kenworth Class 8 trucks being developed under this program?the first of which debuted today?is targeted to meet or exceed that of a diesel-powered truck, while producing water as the only emissions by-product."

The Port of Los Angeles, a global maritime leader with respect to zero-emission and near-zero emission technology testing and adoption, will develop the project in several phases, ultimately encompassing initiatives in Southern California, the Central Coast Area, and Merced County. The initial phase is designed to kick-start the leap to a new class of goods movement vehicles while reducing emissions in designated disadvantaged communities.

"CARB's $41m grant was instrumental in launching this project and putting this innovative technology into our rigorous environment," said Port of Los Angeles executive director Gene Seroka. "We're extremely proud of our role as a leading test lab for emerging green technology, helping to pave the way for next-generation, zero-emission technology."

The project phases will include
Ten new zero-emissions fuel-cell-electric Kenworth/Toyota FCET developed through a collaboration between Kenworth and Toyota to move cargo from the Los Angeles and Long Beach ports throughout the Los Angeles area, the Inland Empire, the Port of Hueneme, and eventually to Merced. The trucks will be operated by Toyota Logistics Services (4), United Parcel Services (3), Total Transportation Services (2), and Southern Counties Express (1).
"It's an Honour for UPS to be collaborating with Toyota, Shell and Kenworth on such a trail-blazing project," said Carlton Rose, president of global fleet maintenance and engineering for UPS. "As a company always looking for the next innovative technology to better serve our customers, UPS was very pleased to be selected as a demonstrating partner for the hydrogen fuel cell electric semi project. With more than 10,000 alternative fuel and advanced technology vehicles in our fleet today, UPS has a long history of pioneering and evaluating technologies that aid us in decreasing our environmental footprint."
Two new large capacity heavy-duty hydrogen fuelling stations will be developed by Shell in Wilmington and Ontario, California. The two new stations will join three additional stations located at Toyota's Long Beach Logistics Services and Gardena R&D facilities to form an integrated, five-station heavy-duty hydrogen fuelling network for the Los Angeles basin. Together, these stations will provide multiple sources of hydrogen throughout the region, including over 1 ton of 100% renewable hydrogen per day at the Toyota Logistics Services station to be operated by Shell, and important research and development advances at a pair of stations operated by Air Liquide, all enabling zero-emissions freight transport.
Expanded use of zero-emissions technology in cargo terminal and warehouse environments, including the first two zero-emissions yard tractors to be operated at the Port of Hueneme, as well as the expanded use of zero-emissions forklifts at Toyota's port warehouse.

A Drop of h2 in the Bucket
Over 16,000 trucks serve the Los Angeles and Long Beach port complexes?North America's largest trade gateway for containerised cargo., That number that is estimated to grow to 32,000 by 2030. Currently, more than 43,000 drayage trucks are in operation at ports across the US.

More Than Just Trucks
This announcement is an extension of Toyota's Environmental Challenge 2050 efforts to eliminate CO2 emissions from its operations. Toyota has previously announced the construction of the Tri-Gen facility which will be the first megawatt-sized carbonate fuel cell power generation plant with hydrogen fuelling in the world. The 100% renewable plant will use agricultural waste to generate water, electricity, and hydrogen that will support Toyota Logistics Services' (TLS) operations at the Port of Long Beach.

In North America, Toyota will minimise environmental impacts, help protect the natural world and share its know-how with others to help create net positive value for the benefit of the company and society. It will create net positive value for carbon by engaging in and supporting efforts that generate renewable energy greater than 100% of the total amount of energy it uses. We recognise climate change presents an urgent and irreversible threat and we must be part of the solution.

Toyota to produce hydrogen from renewable energy at Motomachi.

Hydrogen FCEV trucks, buses and trains are a huge part of Korea and Japan's futures, and Australia has an export role.