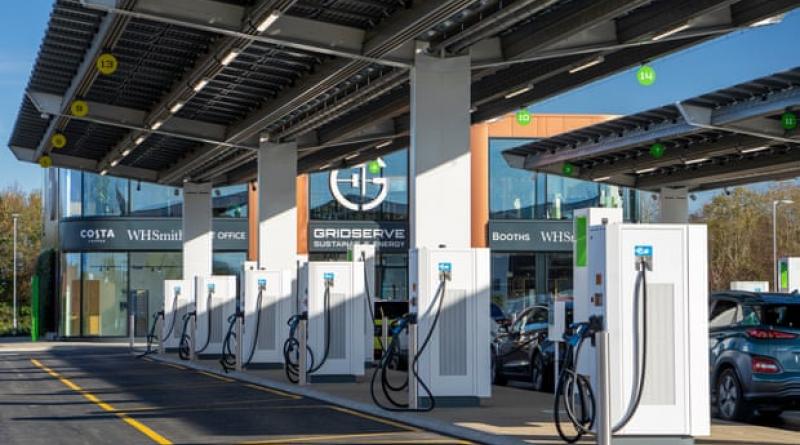 Clean energy firm Gridserve has plans for more than 100 such sites over next five years.

From Monday, the super-fast electric forecourt will deliver 350kW of charging power – enough to add 200 miles of driving range in 20 minutes – to up to 36 cars at a time.

It will use clean energy sourced from one of the UK’s first subsidy-free solar farms at Clayhill in Bedfordshire, overhead solar canopies, and a battery capable of storing enough energy to drive 24,000 miles.

It is the first of more than 100 electric forecourts that Gridserve, a clean energy company, plans to roll out across the country over the next five years as part of a billion-pound “sun-to-wheel” infrastructure.

Toddington Harper, Gridserve’s founder and chief executive, said he hoped to update the traditional petrol station model for a net zero carbon world by offering drivers the confidence to replace their fossil fuel car with an electric alternative.

“Charging has to be simple and free of anxiety,” he said.

The forecourts will offer super-fast wifi, and stand alongside a range of “Best of British” shops including WH Smith and Boots as well as Costa Coffee and the Post Office. Some will offer business meeting pods, a children’s play centre and a “wellbeing area” with exercise bikes that generate electricity.

The standard rate for charging up at a Gridserve electric forecourt will be 24p per kilowatt hour of clean electricity, which beats the current lowest ultra-high power charging rates. This means a typical charge for an average electric vehicle – from 20% charged to 80% – would cost under £10.

Rachel Maclean, the transport minister, said: “As we accelerate towards cleaner and greener transport, I’m delighted to see the future of service stations being brought to life with the opening of the UK’s first all-electric forecourt.

“There has never been a better time to make the switch.”'

In a separate deal, Gridserve will team up with the finance firm Hitachi Capital to offer customers electric vehicle leases, which will include the full cost of charging at a Gridserve electric forecourt.

The UK prime minister, Boris Johnson, said last month that the UK would bring forward its ban on the sale of new fossil fuel vehicles by a decade to 2030 to hasten the decarbonisation of its transport sector.

In addition, the chancellor, Rishi Sunak, has promised £950m to “future-proof” the electricity grid along motorways, so that private investors can install high-powered charging hubs at every motorway service area by 2023.

• This article was amended on 7 December 2020 to correct the abbreviation of kilowatt from KW to kW, an error introduced in the editing process.

Are electric cars on a road to nowhere?