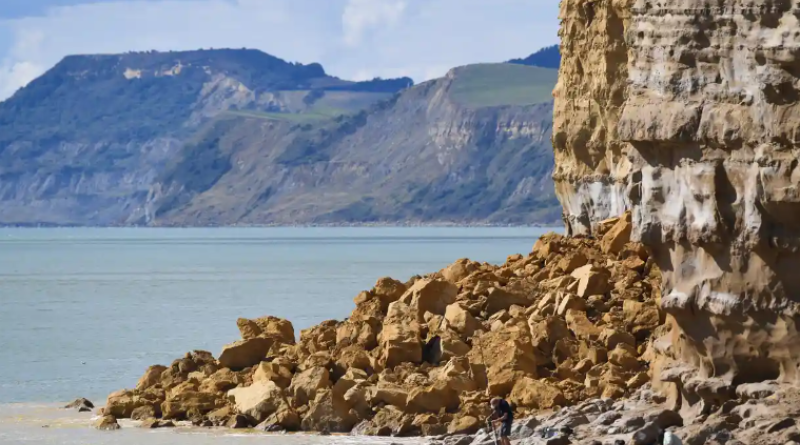 Experts are urging the public to be hypervigilant on south coast beaches as this week’s heatwave could trigger cliff collapses.

One geologist said the area seemed the most vulnerable and beachgoers should take heed of official guidance.

A collapse of Sidmouth cliff in Devon on Monday was the second large landslide along the Jurassic coast in two weeks.

Dorset council has a warning in place appealing to beachgoers to take extra precautions, while Rural East Devon police advised the public not to walk on the beach east of Sidmouth because the unstable cliffs could fall suddenly.

Dr Vanessa Banks, an engineering geologist with the British Geological Survey, (BGS) said: “I walk along a beach as a geologist and I am genuinely shocked that people don’t appreciate the overhangs above them sometimes. That’s because I have the training, and other people are looking at the rocks for their beauty.

“But the councils have gone out of their way to try to communicate with the public and it would be good to see the public engaging with those notices, and reflecting on them.”

The BGS is to issue social media messages asking people to take care as the temperature continues to climb this week.

“The difficulty is, we can’t tell exactly where these incidents are going to occur, therefore it is important that people take care themselves,” Banks said. “They can’t tell themselves, because the cracks that are forming in the cliff top are not visible to the beach user.”

There had been “limited research” into thermal impact into landsliding but there was some evidence suggesting an association. The more clay-like components of sediments shrink through losing moisture during these hot, dry periods, while other rocks expand in the heat, Banks said.

The south coast seemed more vulnerable, “which could be partly because of weak rocks and the covering of superficial deposits is not so thick”.

“This week, at Sidmouth, we had a formation called the Sidmouth mudstone formation, a fairly fine-growing soil, or weak rock, which overlays sandstone, again quite weak,” she said.

The cliff fall was led by processes from the top of the cliff. “That suggests the material at the top, this Sidmouth mudstone formation, is weathered, and its erosion is enabled perhaps as a consequence of some slight movement, maybe because of a change in moisture content,” she added.

If the current heatwave was followed by intense, heavy rainfall, that could also weaken the cliffs, with potential for further rock falls, she said.

The BGS is researching the impact of hot, dry weather on landslides in the context of climate change, she said. Most research had focused on heavy rainfall and flooding, which had a greater impact in terms of life and infrastructure.

Dorset council said: “In extreme temperatures, the risk of rockfalls along Dorset’s World Heritage coastline is even greater than usual. Heat causes rocks to expand and, particularly during temperature fluctuations, any pre-existing cracks can widen and new cracks can also form. This makes cliffs potentially more unstable and rockfalls more likely to happen.”

The Dorset councillor Ray Bryan, the portfolio holder for highways, travel and environment, said: “Rockfalls are entirely unpredictable and can happen at any time – but we do know which conditions make them more likely, and prolonged hot and dry spells are one of them.”

Anyone visiting the Dorset coast during the heatwave should stay away from the base of cliffs, and if walking along the coast paths keep well away from the edges, he said. “Never ignore a warning sign – they are there for your safety.”

Dorset’s coastline has a number of areas with an increased potential for rockfalls, particularly on the cliffs around Seatown, Eype, Burton Bradstock, West Cliff, East Cliff, Mupe Bay, Lulworth and Swanage, the council has said.