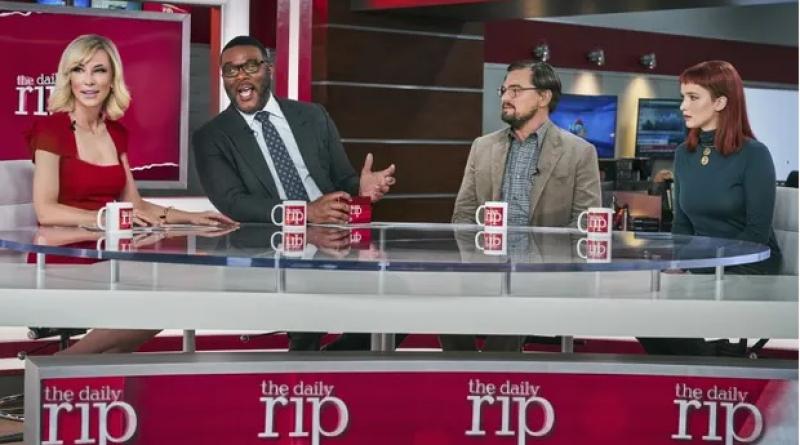 I’ve broken down on TV too, trying to explain the horror of the climate crisis to those who wield power and do nothing

No wonder journalists have slated it. They’ve produced a hundred excuses not to watch the climate breakdown satire Don’t Look Up: it’s “blunt”, it’s “shrill”, it’s “smug”. But they will not name the real problem: it’s about them. The movie is, in my view, a powerful demolition of the grotesque failures of public life. And the sector whose failures are most brutally exposed is the media.

While the film is fast and funny, for me, as for many environmental activists and climate scientists, it seemed all too real. I felt as if I were watching my adult life flash past me. As the scientists in the film, trying to draw attention to the approach of a planet-killing comet, bashed their heads against the Great Wall of Denial erected by the media and sought to reach politicians with 10-second attention spans, all the anger and frustration and desperation I’ve felt over the years boiled over.

Above all, when the scientist who had discovered the comet was pushed to the bottom of the schedule by fatuous celebrity gossip on a morning TV show and erupted in fury, I was reminded of my own mortifying loss of control on Good Morning Britain in November. It was soon after the Cop26 climate conference in Glasgow, where we had seen the least serious of all governments (the UK was hosting the talks) failing to rise to the most serious of all issues. I tried, for the thousandth time, to explain what we are facing, and suddenly couldn’t hold it in any longer. I burst into tears on live TV.

I still feel deeply embarrassed about it. The response on social media, like the response to the scientist in the film, was vituperative and vicious. I was faking. I was hysterical. I was mentally ill. But, knowing where we are and what we face, seeing the indifference of those who wield power, seeing how our existential crisis has been marginalised in favour of trivia and frivolity, I now realise that there would be something wrong with me if I hadn’t lost it.

In fighting any great harm, in any age, we find ourselves confronting the same forces: distraction, denial and delusion. Those seeking to sound the alarm about the gathering collapse of our life-support systems soon hit the barrier that stands between us and the people we are trying to reach, a barrier called the media. With a few notable exceptions, the sector that should facilitate communication thwarts it.

It’s not just its individual stupidities that have become inexcusable, such as the platforms repeatedly given to climate deniers. It is the structural stupidity to which the media are committed. It’s the anti-intellectualism, the hostility to new ideas and aversion to complexity. It’s the absence of moral seriousness. It’s the vacuous gossip about celebrities and consumables that takes precedence over the survival of life on Earth. It’s the obsession with generating noise, regardless of signal. It’s the reflexive alignment with the status quo, whatever it may be. It’s the endless promotion of the views of the most selfish and antisocial people, and the exclusion of those who are trying to defend us from catastrophe, on the grounds that they are “worthy”, “extreme” or “mad” (I hear from friends in the BBC that these terms are still used there to describe environmental activists).

Even when these merchants of distraction do address the issue, they tend to shut out the experts and interview actors, singers and other celebs instead. The media’s obsession with actors vindicates Guy Debord’s predictions in his book The Society of the Spectacle, published in 1967. Substance is replaced by semblance, as even the most serious issues must now be articulated by people whose work involves adopting someone else’s persona and speaking someone else’s words. Then the same media, having turned them into spokespeople, attack these actors as hypocrites for leading a profligate lifestyle.

Similarly, it’s not just the individual failures by governments at Glasgow and elsewhere that have become inexcusable, but the entire framework of negotiations. As crucial Earth systems might be approaching their tipping point, governments still propose to address the issue with tiny increments of action, across decades. It’s as if, in 2008, when Lehman Brothers collapsed and the global financial system began to sway, governments had announced that they would bail out the banks at the rate of a few million pounds a day between then and 2050. The system would have collapsed 40 years before their programme was complete. Our central, civilisational question, I believe, is this: why do nations scramble to rescue the banks but not the planet?

So, as we race towards Earth system collapse, trying to raise the alarm feels like being trapped behind a thick plate of glass. People can see our mouths opening and closing, but they struggle to hear what we are saying. As we frantically bang the glass, we look ever crazier. And feel it. The situation is genuinely maddening. I’ve been working on these issues since I was 22, and full of confidence and hope. I’m about to turn 59, and the confidence is turning to cold fear, the hope to horror. As manufactured indifference ensures that we remain unheard, it becomes ever harder to know how to hold it together. I cry most days now.

Don't Look Up Is a Climate Change Movie in Disguise

Don’t Look Up is right, the end is nigh. Are we ever going to care?

‘It parodies our inaction’: Don’t Look Up, an allegory of the climate crisis, lauded by activists