What is Australia doing to tackle climate change? 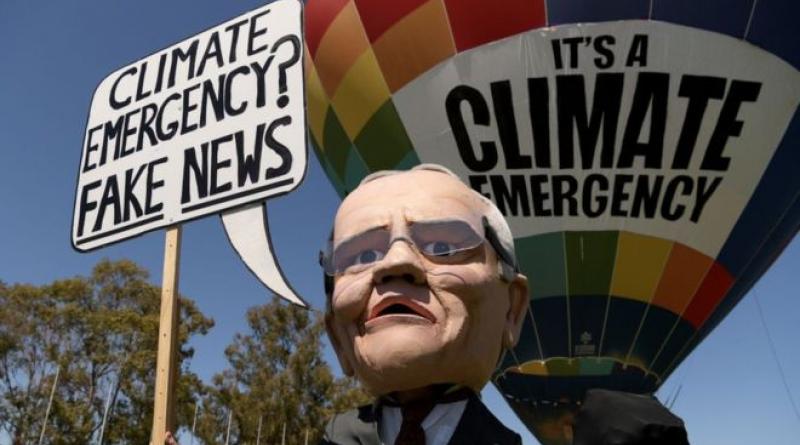 The Australian Prime Minister Scott Morrison has defended his government's stand on climate change as the country deals with devastating fires and a historic heatwave.

Mr Morrison said his policies on reducing emissions would ensure what he called a "vibrant and viable economy, as well as a vibrant and sustainable environment."

Australia is one of the world's biggest per capita greenhouse gas emitters, and there's been a long-running debate about the country's approach to climate change.

So what is it doing to reduce emissions?

What targets does it have?

Under the Paris Climate Agreement to tackle rising global temperatures, Australia set a target for 2030 of making a 26-28% reduction in its emissions compared with 2005 levels.

These goals have been criticised for being too low, and last year the United Nations (UN) reported that Australia was not on track.

The UN found that: "There has been no improvement in Australia's climate policy since 2017 and emission levels for 2030 are projected to be well above the target."

About half of the G20 countries (those with the biggest economies), including Australia, are falling short.

The Climate Change Performance Index ranked Australia last out of 57 countries responsible for more than 90% of greenhouse gas emissions on climate policy.

It highlighted the country's no-show at a UN climate summit in September and its withdrawal from an international fund to tackle climate change.

The opposition Labor Party in Australia has said the government is "refusing to act" on climate change.

However, the Australian government maintains it is on course to meet its 2030 commitments. "Our climate policy settings are to meet and beat the emissions reduction targets," according to Australian PM Scott Morrison.

Australian emissions will be only 16% lower than 2005 levels in 2030, according to projections published in December.

But it says it will meet the 2030 targets by counting the quantities of carbon already reduced under the previous international climate agreement, the Kyoto Protocol.

More important than specific targets - Australia as a fossil fuel producer has so far failed to acknowledge the need to plan for a world of net zero emissions, says Myles Allen, a climate change expert at the University of Oxford.

Australia is among the world's largest exporters of iron ore, uranium, coal and natural gas.

It was the fourth largest producer of coal in 2017, according to the International Energy Agency.

Phasing out coal is considered crucial to limiting global warming to within 1.5C, but the Australian government is continuing to back the industry for the role it plays in the economy.

Facing criticism over his handling of the bushfires and response to climate change, Australian prime minister Scott Morrison said he will not make"reckless" cuts to the coal industry.

The government recently approved the construction of a controversial new coal mine - which could be the biggest in the world and would export coal to India.

What are some of the government's climate policies?

A central climate plan is the Emissions Reduction Fund (ERF).

The government put forward an additional A$2bn (£1bn) spread over 15 years to help businesses and farmers reduce emissions, bringing up total investment to $4.5bn. The government says it will deliver 100 million tonnes of emissions reductions.

Though aspects of the ERF have been praised, "Australia has adopted a piecemeal approach to emission reduction," said the OECD (an economic body which monitors richer, industrialised nations) in a 2019 report.

The government needs to show how existing instruments, such as the ERF, can be scaled up to reach Paris Agreement goals, added the report.

Scientists round the world are looking aghast at the politics of climate change in Australia.

It's one of the most vulnerable countries on the planet to rising temperatures, yet there is still denial about the impacts of rising CO2 levels on events like the current wildfires.

There is no serious doubt among scientific institutions that rising global temperatures are leading to record heat.

The heatwaves are driven by a natural phenomenon but they are adding to an already over-heated planet.

In the election, the victorious Liberal (conservative) Party categorised climate change as a metropolitan fad for urban professionals, and gained support for the world's biggest coal mine.

Coal is the dirtiest fuel and scientists say we shouldn't be building more coal-fired power stations if we want to stabilise the climate.

This piece was originally published on 24 December 2019.

Floods in Evia, Greece Leave 5 Dead – a Baby Among Them – and 2 Missing