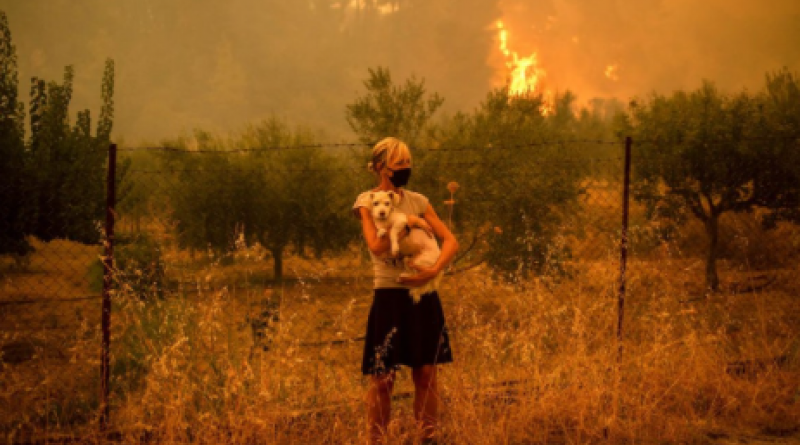 Uncontrolled wildfires have forced thousands of people to flee their homes in parts of Greece and Turkey over the last two weeks, tearing through dry forests and causing what Greek prime minister Kyriakos Mitsotakis has described as a “nightmarish summer”.

Firefighters and residents were battling a massive forest fire on Greece’s second-largest island of Evia for a seventh straight day on Monday.

The smoke and ash from the fire, on a rugged region known for its forests and coves almost touching the Greek mainland, was so intense as to block out the sun, turning the sky orange as the blaze rampaged across its northern hills.

But the blaze is just one of dozens that have broken out across the Mediterranean since late July as the area was baked by its worst heat wave in three decades, which sent temperatures soaring to 45C.

Other big fires have been burning forests and farmland in the southern Greek region of the Peloponnese, while a major blaze that encroached into the northern suburbs of Athens and Mount Parnitha national park on the fringes of the capital has finally begun to wane.

Massive fires have also raged for 13 days in neighbouring Turkey, where firefighters were still trying to extinguish blazes in two locations in the southwestern coastal province of Mugla.

“The situation is improving,” Turkish agriculture and forestry minister Bekir Pakdemirli said on Sunday. “It is too soon to say the fires are under control, but we are reaching that point.”

Wildfires have also been seen in southern Italy, North Macedonia and Montenegro, where a large fire in the Malo Brdo district of the capital Podgorica came perilously close to houses.

Firefighters from more than 20 countries across Europe and the Middle East have been flown in to help bring the situation under control, with a British team led by officers from Merseyside Fire & Rescue Service landing in Greece on Sunday and more on the way from Lancashire, London, South Wales, West Midlands and the National Resilience Assurance Team.

Are some regions more vulnerable than others?

The areas most at risk are those that are home to large forests of highly flammable pine trees, which have been rendered bone-dry tinderboxes by the recent heatwave.

The ignition of summer wildfires, either by human error or dry lightning, in these exposed coastal lands has resulted in flashpoints more severe than usual because of the lack of moisture in the wood.

They are then being encouraged and swept along by shifting ocean winds from the Agean, greatly exacerbating the situation and causing the inferno to spread.

Satellite imagery from the EU’s Earth Observation Program has shown vast tracts of northern Evia charred as a result, with the fire having cut across the island from coast to coast.

“The long period of hot dry weather in Greece has resulted in large areas of natural habitat becoming very dry and available to burn,” explains Dr Rory Hadden of the University of Edinburgh. “So when a fire starts, there is plenty of fuel for it to consume and the fire will spread according to the terrain and the wind. Longer periods of hotter, drier weather will lead to more wildfires. In some places more intense rain falling in the wet seasons promotes more vegetation growth which dries out and can burn in the dry season.”

Dr Thomas Smith of the London School of Economics adds: “Wildfires are not unusual in the Mediterranean and often play an important role in maintaining shrublands and dry forest ecosystems in the region.

“The scale of the fires is somewhat unusual for Turkey, with a much larger burnt area than an average year. However, it’s important to note that fire seasons in Greece, Italy, and Turkey tend to fluctuate year-on-year, and are characterised by a big fire season every few years. It seems that this year is a big fire season year.”

Why are we asking this now?

The disaster unfolding in southern Europe coincides with the publication of a “devastating” new 3,000-plus-page report from the UN’s Intergovernmental Panel on Climate Change (IPCC) that warns the world is running out of time to avert the climate emergency.

Global heating is already accelerating sea level rise and worsening extremes such as heat waves, droughts, floods and storms, the dossier reiterates. Tropical cyclones are getting stronger and wetter while Arctic sea ice is dwindling in the summer and permafrost is thawing. And all of these trends are on course to get worse.

Drastically cutting carbon emissions in the next couple of decades would “very likely” keep global heating “well below” 2C, IPCC co-chair Valerie Masson-Delmotte said. But if nothing changes, the atmosphere is forecast to warm by 2C by the middle of this century, an event with alarming consequences for the natural world and all life on Earth.

“It’s just guaranteed that it’s going to get worse,” said report co-author Linda Mearns, a senior climate scientist at the US National Center for Atmospheric Research. “Nowhere to run, nowhere to hide.”

UN secretary-general Antonio Guterres said the stark report by 234 IPCC scientists amounted to nothing less than a “code red for humanity”.

“The alarm bells are deafening, and the evidence is irrefutable: greenhouse gas emissions from fossil fuel burning and deforestation are choking our planet and putting billions of people at immediate risk,” he said. “Global heating is affecting every region on Earth, with many of the changes becoming irreversible.”

Also commenting on the IPCC’s findings was teenage activist Greta Thunberg, who tweeted: “It is up to us to be brave and take decisions based on the scientific evidence provided in these reports. We can still avoid the worst consequences, but not if we continue like today, and not without treating the crisis like a crisis.” 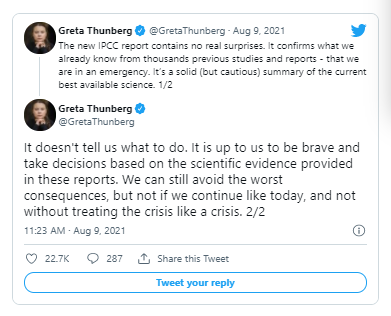 Caroline Lucas, Green Party co-leader, added in a tweet of her own: “We’re in danger of going down in history as the species that chose to monitor its own extinction rather than taking urgent steps to avert it.”

UK climate minister Alok Sharma said he hopes the new document will act as a “wake-up call” for polluters.

Britain is hosting Cop26 - the next major climate crisis summit, overseen by Mr Sharma - in Glasgow in November, a gathering being billed as increasingly pivotal if humanity is to work together and change its course to avert ecological disaster.