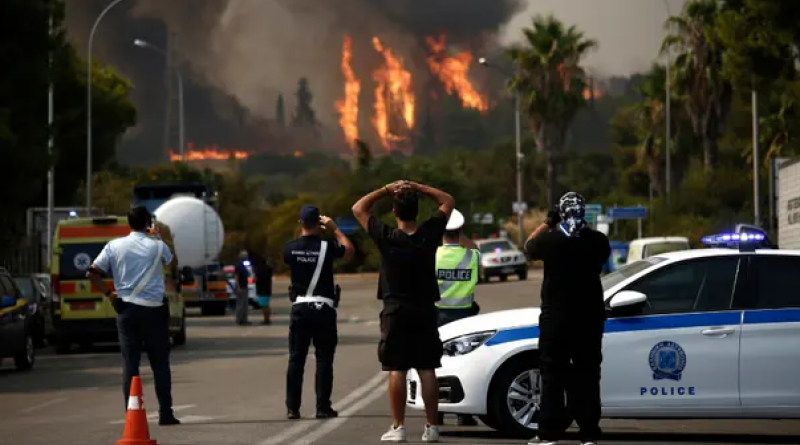 Thousands of people have fled their homes north of Athens after a forest wildfire reached residential areas. The hurried evacuations took place just as Greece grappled with its worst heatwave in decades.

The blaze sent a huge cloud of smoke over Athens and prompted multiple evacuations near Tatoi, 13 miles to the north. Residents left their homes in cars and on motorcycles, heading toward the capital in a blanket of smoke.

“It is a large fire and it will take a lot of work to get this under control,” the greater Athens regional governor, George Patoulis, told state-run ERT television. “The foliage is very dense in these areas and it is very dried out due to the heatwave, so the conditions are difficult.”

As the flames approached their homes, residents were seen running to their cars, faces covered with dampened cloths to protect them from the heavy smoke. One group stopped to help staff from a riding school push their horses into trucks to escape the flames.

With the heatwave scorching the eastern Mediterranean intensifying, temperatures reached 42C in parts of the Greek capital. Authorities described the temperatures as the worst in Greece since 1987.

The extreme weather has fuelled deadly wildfires in Turkey and blazes in Italy, Greece and Albania. Wildfires also raged in other parts of Greece, prompting evacuations in a coastal area of the southern Peloponnese region as well as on the islands of Evia and Kos, authorities said.

The fires prompted the Greek basketball star Giannis Antetokounmpo to cancel celebrations planned in Athens for the NBA championship he won recently with the Milwaukee Bucks. “We hope there are no victims from these fires, and of course we will postpones [sic] today’s celebration,” he wrote in a tweet.

Earlier, authorities closed ancient sites, including the Acropolis, during afternoon hours. The site, which is normally open in summer from 8am to 8pm, will have reduced opening hours this Friday, closing between midday and 5pm.

Five water-dropping planes and five helicopters were involved in the firefighting effort near Athens, including a Beriev Be-200 amphibious aircraft leased from Russia. The blaze damaged electricity pylons, straining an electricity network already under pressure from the increased use of air conditioning.

The Greek fire service maintained an alert for most of the country for Tuesday and Wednesday, while public and some private services shifted operating hours to allow for afternoon closures.

Wildfires tear through 1m acres in US west as 16,000 firefighters battle onslaught