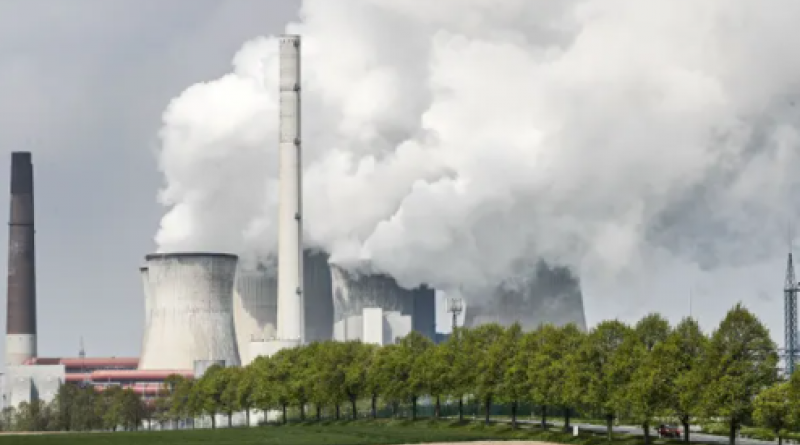 Global greenhouse gas emissions are likely to rise to record levels in the next two years, as governments fail to “build back better” from the Covid-19 pandemic.

Emissions will rise again this year and next year, after a fall last year, and 2023 is now on track to see the highest levels of carbon dioxide output in human history, equalling or surpassing the record set in 2018, according to forecasts released by the International Energy Agency on Tuesday.

Such a rise would put the goals of the Paris climate agreement all but out of reach, as scientists have warned that emissions must halve this decade if the world is to limit global temperature rises to 1.5C, beyond which the effects of climate breakdown will ravage swathes of the globe.

The reason for the sharp rise is that governments have failed to invest in green energy as they have sought to rebuild their economies from the Covid-19 pandemic. 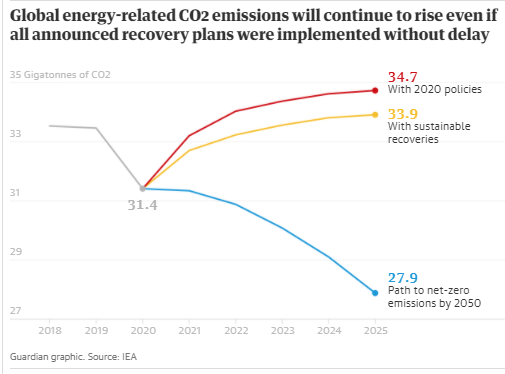 Fatih Birol, executive director of the IEA and one of the world’s foremost energy economists, said: “Of more than $16tn [£11.7tn, being spent on recovery from Covid-19] only 2% is going to clean energy investments. This is by far not enough. What we will see is that 2023 will reach an all-time record high [in emissions]. This is very worrying.”

Significant to the forecast emissions rise is the pattern of pandemic recovery in emerging economies. Big wealthy economies, such as the US, EU member states, Japan and South Korea, have been investing in renewable energy and are on track to reduce their emissions. But countries such as India, Indonesia, Latin American countries and other emerging economies are falling behind in clean energy investments.

About 90% of the forecast growth in emissions will come from the developing world, so helping such countries invest in green energy is of global importance, said Birol. “The most critical faultline [in attempts to tackle the climate crisis] is providing clean energy investments in emerging countries.”

He said developing countries needed financial help to make the leap. “At the global scale, there is no lack of capital [available for investment in green energy] but that capital does not look at these projects in emerging economies,” he said. “There is a perception that the risk is higher.”

He called on institutions such as the International Monetary Fund to step up their help to direct funds towards clean energy projects. Wind and solar energy are now cheaper than fossil fuels in most parts of the world, while investments in energy efficiency also yield strong returns, and electric vehicle technology is becoming more affordable.

Rich countries must also fulfil their promises to ensure at least $100bn a year in climate finance flows to developing countries, to help them cut emissions and cope with the impacts of extreme weather, Birol said. The pledge of $100bn a year has been a serious sticking point in the run-up to the Cop26 talks.

“This $100bn should be a floor, not a ceiling,” he added. Cutting emissions in developing countries is cheaper than doing so in the industrialised world, giving rich countries an added impetus to extend assistance. “Advanced economies have both an economic rationale and a moral obligation to supply climate finance to the emerging world,” he said.

China, the world’s biggest emitter, has also been investing in renewable energy but has strong and continuing investments in coal and high-CO2 infrastructure.

Birol said there were encouraging signs, however, that coal investment was reducing. “There is good news on coal. We do not see so much investment in coal.”

Birol will present his findings to the climate and energy ministers of the G20 nations, meeting later this week in Italy. He said it was vital that the G20, and all countries meeting for the crunch UN Cop26 climate talks this November in Glasgow should put in place a real “green recovery” from the pandemic.

“We need to have as a purpose how to mobilise investment in clean energy,” he said. “We need this at Cop26 – there is no way out.”

CO2 emissions have already rebounded strongly after their sudden plunge last spring, when governments around the world sent their countries into successive lockdowns. They are set to jump this year by the second highest amount on record, according to the IEA, the gold standard for emissions predictions.

There had been hopes that this bounceback would be temporary, because the “brown economy” – dependent on high fossil fuel use – came roaring back after the Covid-19 recessions in many countries, while the green economy is still in development.

Last week, Vivid Economics found that only about a tenth, or about $1.8tn, of all spending on recovery measures would have a beneficial impact on the climate and environment, while about twice that amount would have an environmentally harmful impact.

IEA forecasts 5 per cent rise in global CO2 emissions in 2021.

Pathway to critical and formidable goal of net-zero emissions by 2050 is narrow but brings huge benefits, according to IEA special report.