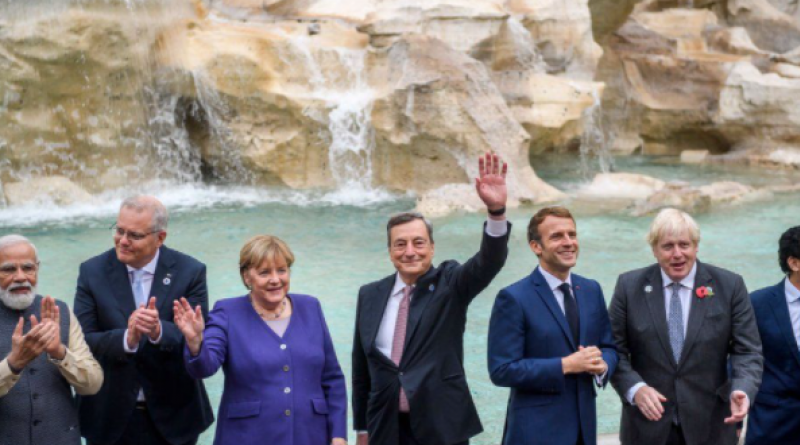 The leaders of the world's richest economies have agreed to pursue efforts to limit global warming with "meaningful and effective actions".

But the agreement from the G20 summit in Rome made few concrete commitments, disappointing activists.

Host nation Italy had hoped that firm targets would be set before the COP26 summit in Glasgow, which has now begun.

"These commitments... are drops in a rapidly warming ocean," Mr Johnson said.

US President Joe Biden said there were a "series of very productive meetings" at the G20, adding that he was "looking forward to continuing to make progress" on climate issues in Glasgow.

He also said China and Russia - who are among the world's biggest polluters - "basically didn't show up" on matters of the climate, which was "disappointing".

The G20 group, made up of 19 countries and the European Union, accounts for 80% of the world's emissions.

The communiqué, or official statement released by the leaders, also makes no reference to achieving net zero by 2050.

Net zero means reducing greenhouse gas emissions as much as possible, until a country is absorbing the same amount of emissions from the atmosphere that it is putting out.

Italian Prime Minister Mario Draghi did however say in his closing statement that all of the G20 countries are committed to reaching the target by the mid-century. Scientists say this must be achieved by 2050 to avoid a climate catastrophe, and most countries have agreed to this.

However China - the world's biggest polluter - and Russia have pushed that target out to 2060.

Neither China's President Xi Jinping, nor Russia's Vladimir Putin were in Rome for the conference, instead joining via video link. Their absence raised concerns that a deal would not be easy to reach.

Mr Putin said his plan was to "not just to reach carbon neutrality, but to make sure that within the next three decades, the amount of greenhouse gas emissions in Russia is lower than, for instance, that of our neighbours and colleagues in the EU."

The communiqué does pledge to stop financing new, unabated coal plants internationally by the end of this year - a strong message to coal-reliant nations such as China, Russia and India. But the G20 leaders stopped short of agreeing to end coal power in their own nations.

Mr Draghi said that they were closer to reaching the goal of providing $100bn a year in climate financing to developing countries - a key pledge which has been pushed out to 2023.

António Guterres, the UN's secretary-general, tweeted that he was leaving Rome with his "hopes unfulfilled" but not buried. 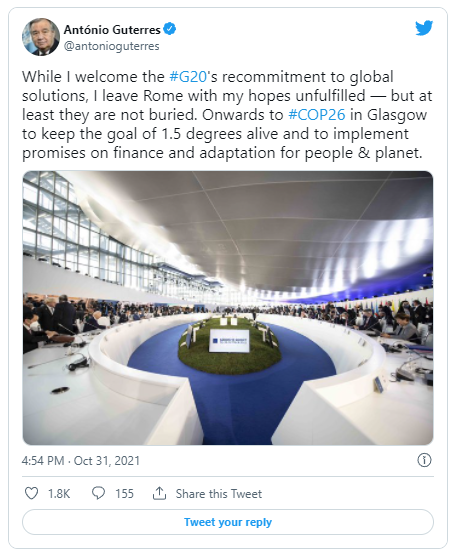